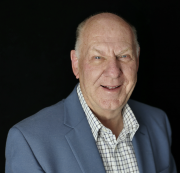 On 21 October, as part of TelSoc’s 2022 Charles Todd Oration event in Sydney, David Piltz was awarded this year’s Charles Todd Medal for his outstanding contribution to celebrating the telecommunications history, through protecting and celebrating its valuable historical assets. This blog provides the short speech made by the author, in awarding the medal on behalf of the TelSoc Board, and David Piltz's response.

The Charles Todd Medal has been awarded regularly since 1992 to individuals who have made the most outstanding contribution to Australian telecommunications in recent years.

Because this year is the sesquicentenary of the completion of the Overland Telegraph, the TelSoc board decided it would be appropriate this year to award the Medal to the individual who has made the most outstanding contribution to celebrating the industry’s history. There has been no major work by an historian on Australian telecommunications as a whole since Ann Moyal’s masterpiece, “Clear across Australia’, published in 1983. So, we turned to those who have played a vital role in protecting and celebrating our industry’s valuable historical assets.

Before 1990, there were several telecommunications museums in Australia, housed in telephone exchange buildings of Telecom Australia and OTC with the support of local management, and staffed part-time by unpaid volunteers.  With the creation of Telstra, these museum assets together with many other heritage items not yet forming part of the museums, became the property of Telstra. As Telstra became progressively privatised in the 1990s and 2000s, and at times became headed by CEOs with little personal interest in the industry’s history, many became concerned at the fate of the valuable historical archives and heritage equipment. We would hear how some of the original museums had been closed down, and much of the archives and valuable historical equipment had simply been bundled up and sent off to warehouses.

But throughout this period there would be whispers that a Telstra engineering executive named David Piltz was acting as a guardian angel, co-ordinating the efforts of many volunteers in keeping the Melbourne, Sydney and Brisbane telecommunications museums in operation, and protecting as much as he could of the remaining national heritage assets, whether already warehoused or still kept in Telstra buildings across the nation.

In 2018 we learned to our great pleasure that Telstra had created a not-for-profit charitable subsidiary, Heritage Telecommunications Ltd, with David as its foundation Chairman, and had transferred all of its heritage assets plus considerable funding to this subsidiary. Not only would there be money to upgrade the remaining museums, the Melbourne Museum would become the National Communications Museum and be professionally staffed. Even better, the vast bulk of the heritage assets would be catalogued and stored in a high-quality, temperature- and humidity-controlled warehouse, purpose built for the organisation in Dandenong.

David Piltz retired from Telstra in June this year after 49 years’ service as a telecommunications engineer, and as a member of Telstra’s executive team since 1990. His responsibilities have included the planning, design, construction and maintenance of its national network, through several generations of technology change.

In 2005 he was appointed chairman of a voluntary and informal group within Telstra, which took over the management of Telstra’s historical collection from Telstra’s Corporate Affairs group. By 2018, with the support of CEOs David Thodey and particularly Andy Penn, David was instrumental in the creation of Heritage Telecommunications Ltd as a not-for-profit subsidiary of Telstra, with the charter of managing Telstra’s heritage collection as a stand-alone organization with charitable status. As its foundation Chairman, David continued in the job until his retirement from Telstra four months ago.

I think you have heard enough to realize that David Piltz thoroughly deserves the award of TelSoc’s Charles Todd Medal in 2022, for his outstanding contributions to Australian telecommunications in celebrating our industry’s history and protecting as much as possible of its heritage assets. 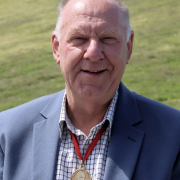 The Charles Todd medal is a very prestigious award. I am extremely pleased to be the 2022 recipient with the focus on acknowledging the dual aspects of my career in telecommunications. I sincerely thank the Telsoc Board for their consideration that I might be a worthy recipient. When announced I was both overwhelmed and humbled as it puts me in illustrious company. I recently looked up the recipients list from previous years - quite a Who’s Who.

Aspects of my nearly 50 years in Australian telecommunications

I started in 1973 with the PMG in Adelaide as a Cadet Engineer and graduated with a BE (Hons) degree from Adelaide University. My career with Telecom Australia, starting in 1975, had me working in District Works (Adelaide North), then with Transmission Construction Country SA (in the Murray Bridge and Mt Gambier District), and then with Darwin and NT (Regional Planning) in the Outer Darwin Semi-Rural Area.

I then transferred to National Office in Melbourne, where I worked in Transmission Planning on Interexchange Fibre Networks, ISDN, Inter-Capital Planning, National Fibre Network, and Data Networks Bandwidth expansion.

In the National Office, I then worked with the Access Planning and Technology division on the following:  Broadband for Consumers and Business, ADSL1, ADSL2+, VDSL, and HFC DOCSIS1. My next job was with Technology Selection and Development, variously for Voice, Data, Video, Mobile services, Connectivity, Broadband, Fibre, copper cables, HFC, Satellite services, PCM, ATM, IP, Internet and Cyber Security.

The rate of change of technologies has had the most significant impact on my engineering career in telecommunication.  But it has also been influenced by changes in government policy, company restructures, company policies and of course people and personalities in leadership positions.

Driving the preservation of the heritage of Australian telecommunications

My involvement in protecting the industry’s heritage began with a suggestion by some work colleagues in 2006, to which I readily responded. It required a commitment of time and thought on how to take the then Telstra heritage collection, which was about to be dispersed and to be no more, to a sustainable, solid, business-based solution that preserved the collection and its valuable knowledge. We took the view that ‘Telstra’s Heritage = Australia’s Heritage’.

For twelve years we worked within Telstra, beyond our day jobs, as the unofficial ‘Heritage Telstra Board’.  We eventually persuaded Telstra’s senior management  to create a wholly owned subsidiary, Heritage Telecommunications Ltd, as a registered charity.   I served as Board Chairman on HTL for four years until my retirement from Telstra in June 2022, after 49 years and 95 days with the PMG, Telecom Australia and Telstra.

Taking this road could not have been possible without some very close collaboration with some equally passionate people. Two individuals in particular should be acknowledged and thanked: Paul Kinchington as Policy and Strategy advisor, and Stef Nowak as the ‘man on the ground’ Collections Officer and keeper of the heritage collection knowledge.

Our network included experts both within Telstra (from Legal, Finance, Corporate Affairs and Operations) and outside Telstra in volunteer organisations that had kept our national telecommunication history and heritage alive in Queensland, NSW and Victoria primarily; but also with links into South Australia, Western Australia and internationally via the OTC Veterans Association.

I have previously presented to Telsoc members in 2021, the details of this sixteen year journey. So now I will only touch on three significant moments that led to the creation of Heritage Telecommunications Ltd:

1.  In 2006, a crucial meeting with Corporate Affairs, the then ‘owner and manager’ of Telstra’s heritage collection. This was a meeting that changed their direction:  instead of dispersing the collection, it was decided to hold it together. The start of the new direction began.

2.  In 2014, The collection was evaluated by an independent external  firm, who reported that Telstra had a collection of “National Significance” and recommended two actions: (a) to preserve and look after the collection;  and (b) to bring it to life.

3.  In 2018, the completion of the ‘CEO Approval Paper, creating the Heritage Telecommunications Limited (HTL) as a subsidiary with charitable  status, and the Deed of Gift. This was the culmination of a year-long term intensive effort to convince senior Telstra Executives (the CFO, COO, Legal, Corporate Affairs and CEO) of the virtues of having a sustainable approach to managing and displaying the Heritage collection. They rose brilliantly to the challenge.

Since its inception in 2018, Heritage Telecommunications Ltd (HTL) has funded:

Overall the HTL entity is adequately funded and resourced, enabling the heritage collection to be consolidated and brought to life in a sustainable way.

Finally I wish to thank the TelSoc Board for awarding me the Charles Todd Medal for 2022.