A 1945 technical paper from the Telecommunications Journal of Australia is revisited that describes the timing and signalling equipment used at the Melbourne Observatory between 1853 and 1945. The equipment was used to provide the Victorian Time Signal Service for over ninety years.

The measurement of time has a long history stretching back thousands of years. In most ancient civilisations the sun and the moon were observed to determine the time of day, the lunar cycle and the seasons. This led to astronomical observatories being the traditional sources of time measurement.

Fast forward to the Victorian gold rush: the Melbourne Observatory was established at Williamstown in 1853 to provide an astronomical capability for the new colony and a time ball tower for shipping (Cannon 1945). It was then moved to South Yarra in 1864 because of the deterioration of observing conditions at its previous site due to smoke and dust. The Observatory site still exists in South Yarra today and is managed by the Royal Botanic Gardens. (RBG 2014)

The Observatory closed in 1945 due to encroaching light pollution from the city.

The TJA paper describes in detail the timing and signalling equipment in the observatory at the time of its closure in 1945, including the pendulum reference clocks and the transit telescope. The paper also discusses the electro-mechanical equipment used to insert the time signal pips into the time signals.

One could be forgiven for assuming the pendulum clocks would lack accuracy compared to today?s quartz clocks. These pendulum clocks were actually designed by British railway engineer William Hamilton Shortt in collaboration with horologist Frank Hope-Jones,and manufactured by the Synchronome Co. Ltd. of London, UK.They were the most accurate pendulum clocks ever commercially produced,and became the highest standard for timekeeping between the 1920s and the 1940s. Recent non-intrusive optical testing has verified their error rate to be only one second in 12 years. (Wikipedia 2014b)

Naturally, special precautions were taken in 1945 to ensure the time references were not disturbed in the transfer from the Observatory to the PMG. The PMG also developed new electronic equipment (rather than mechanical mechanisms) to increase the reliability of the pendulum clock references and create the time signal pips.

The transfer of the time signal service to the PMG in 1945 was logical, given the PMG had the means to distribute time references throughout their national telephone network and via high frequency broadcast stations like VNG Lyndhurst in Victoria. Accurate time references have always been required by professionals such as surveyors, for pinpointing locations in remote Australia.

Eventually the quartz clock replaced the pendulum and later the atomic clock (either caesium or rubidium) replaced the quartz clock as the primary standard. Today, GPS is the most practicable time standard in locations with satellite visibility and is linked to US Naval Research Laboratory?s atomic standards. The Precision Time Protocol (PTP), described in IEEE standard 1588, is used for Ethernet based time references and is linked to similar atomic standards. (Wikipedia 2014c)

The oldest Shortt pendulum clock (Number 5) from the Melbourne Observatory was donated by the PMG to Museum Victoria in 1972.  (Melbourne Museum 2014b)

Wikipedia-1, 2014a. ?Melbourne Observatory?, at  http://en.wikipedia.org/wiki/Melbourne_Observatory 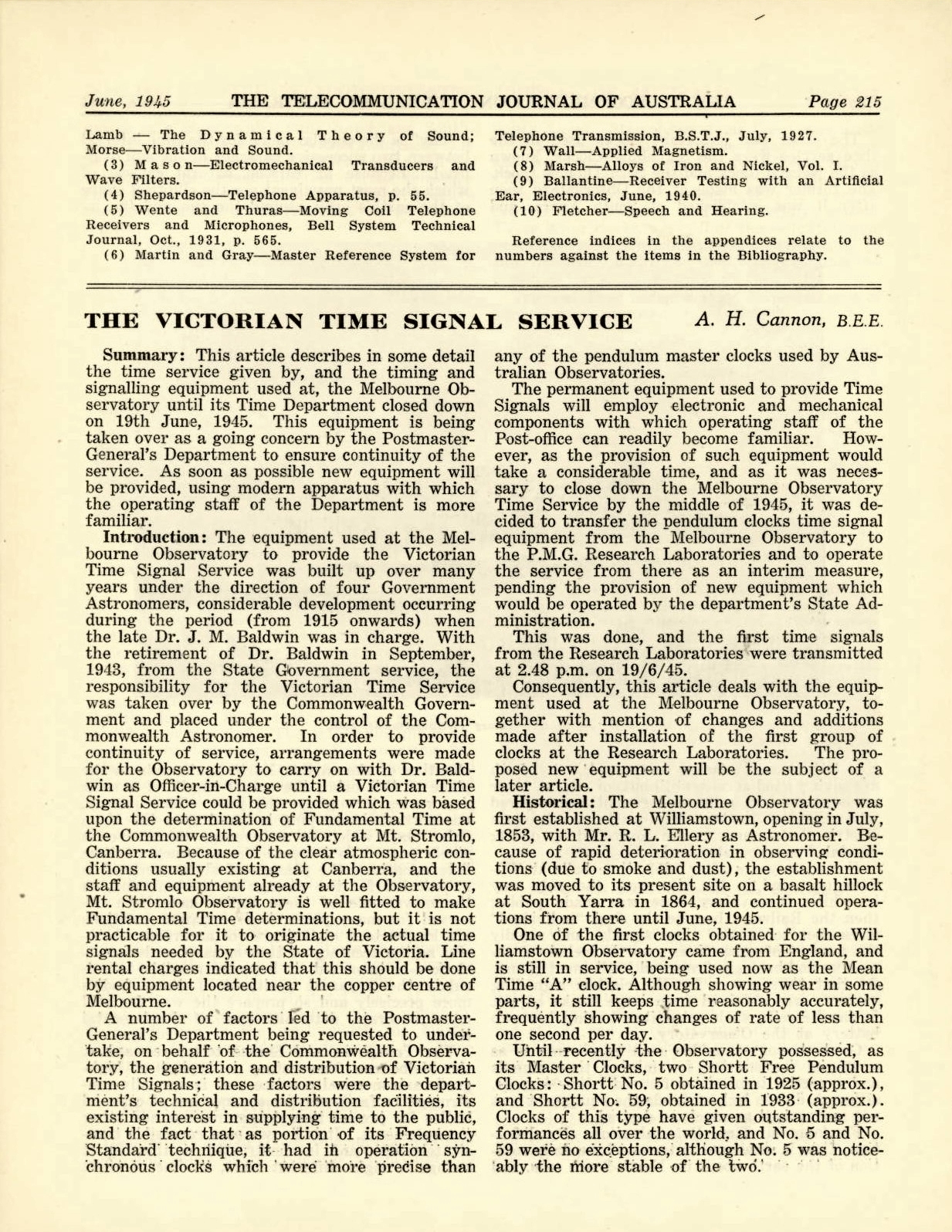 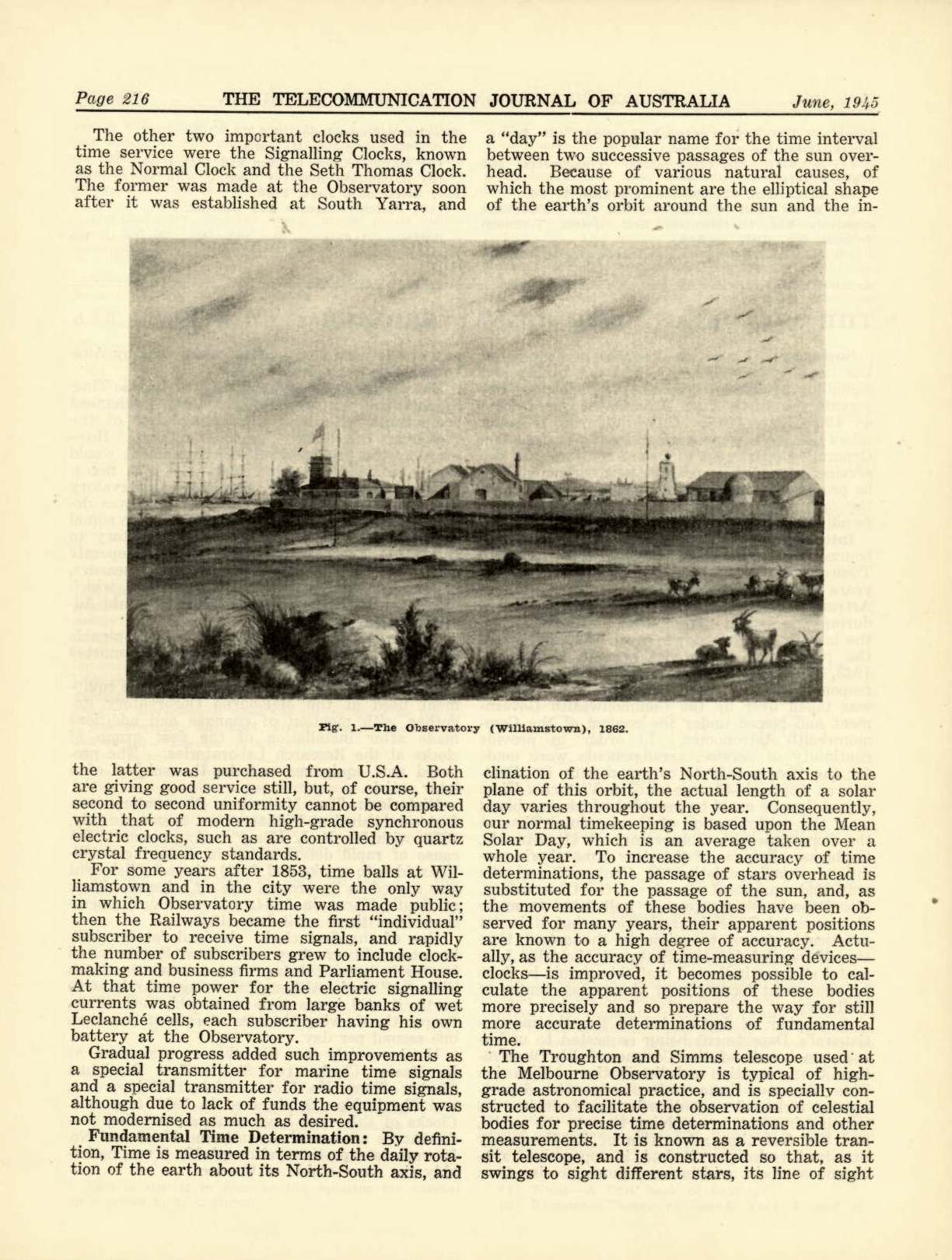 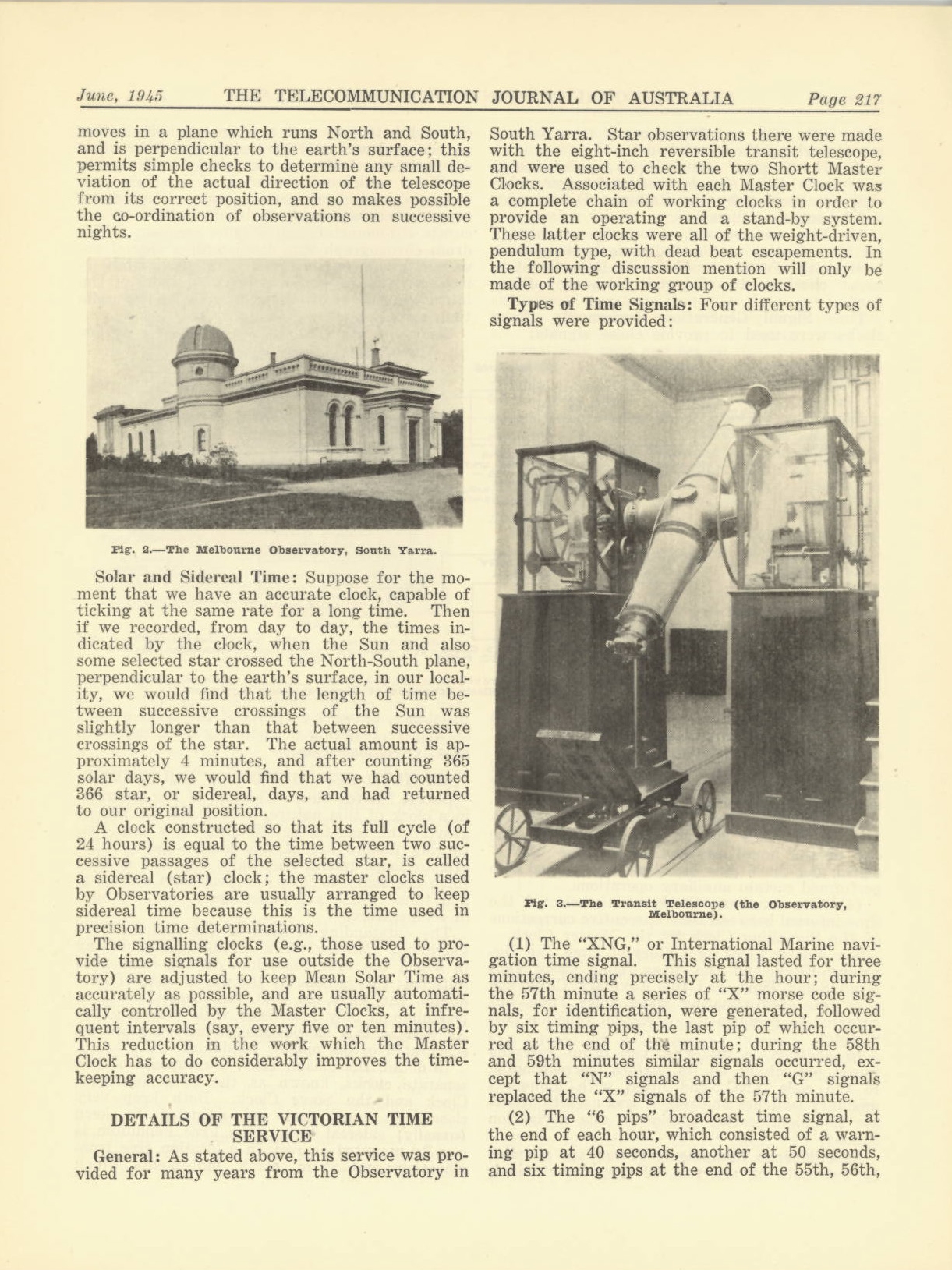 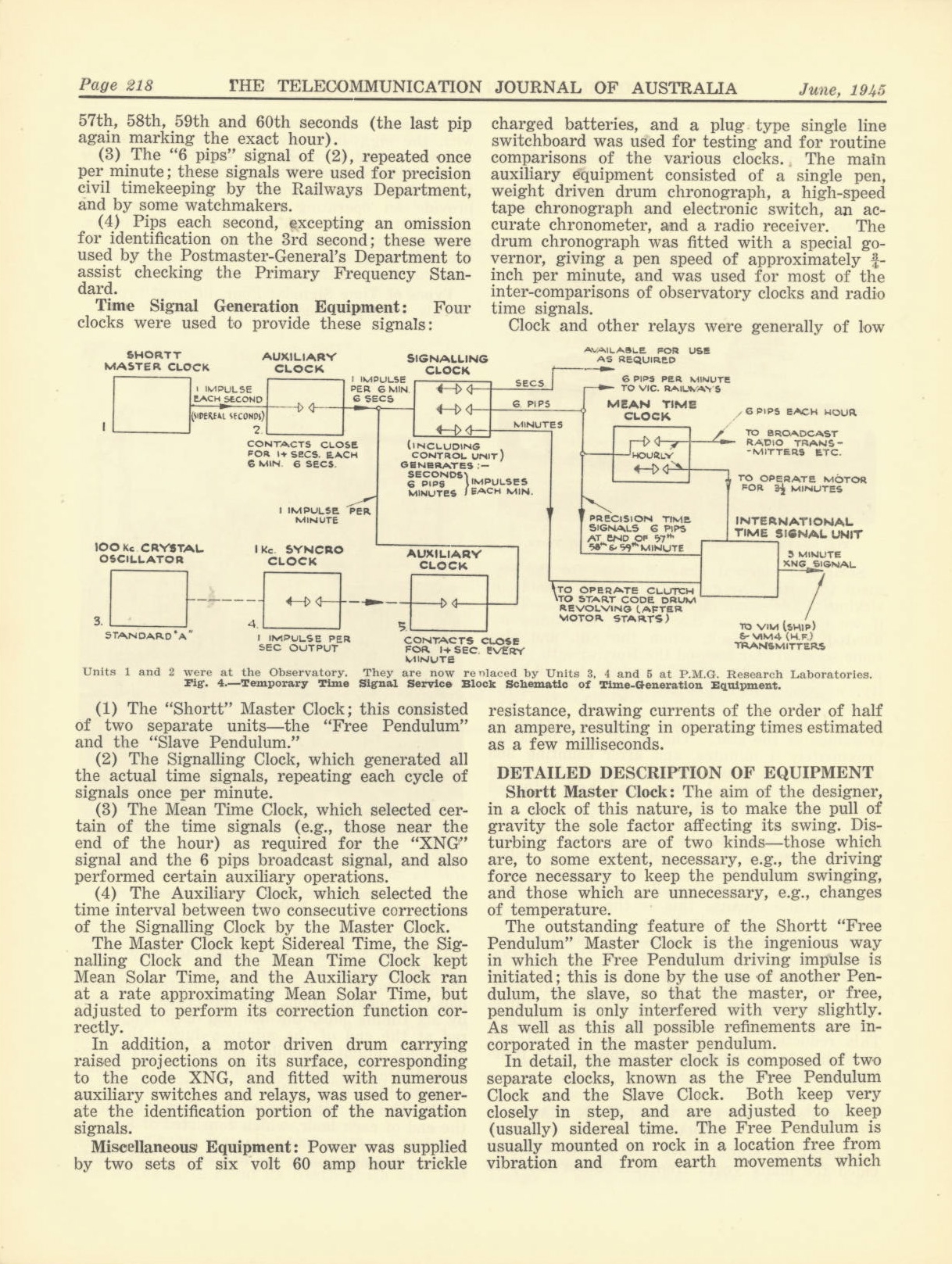 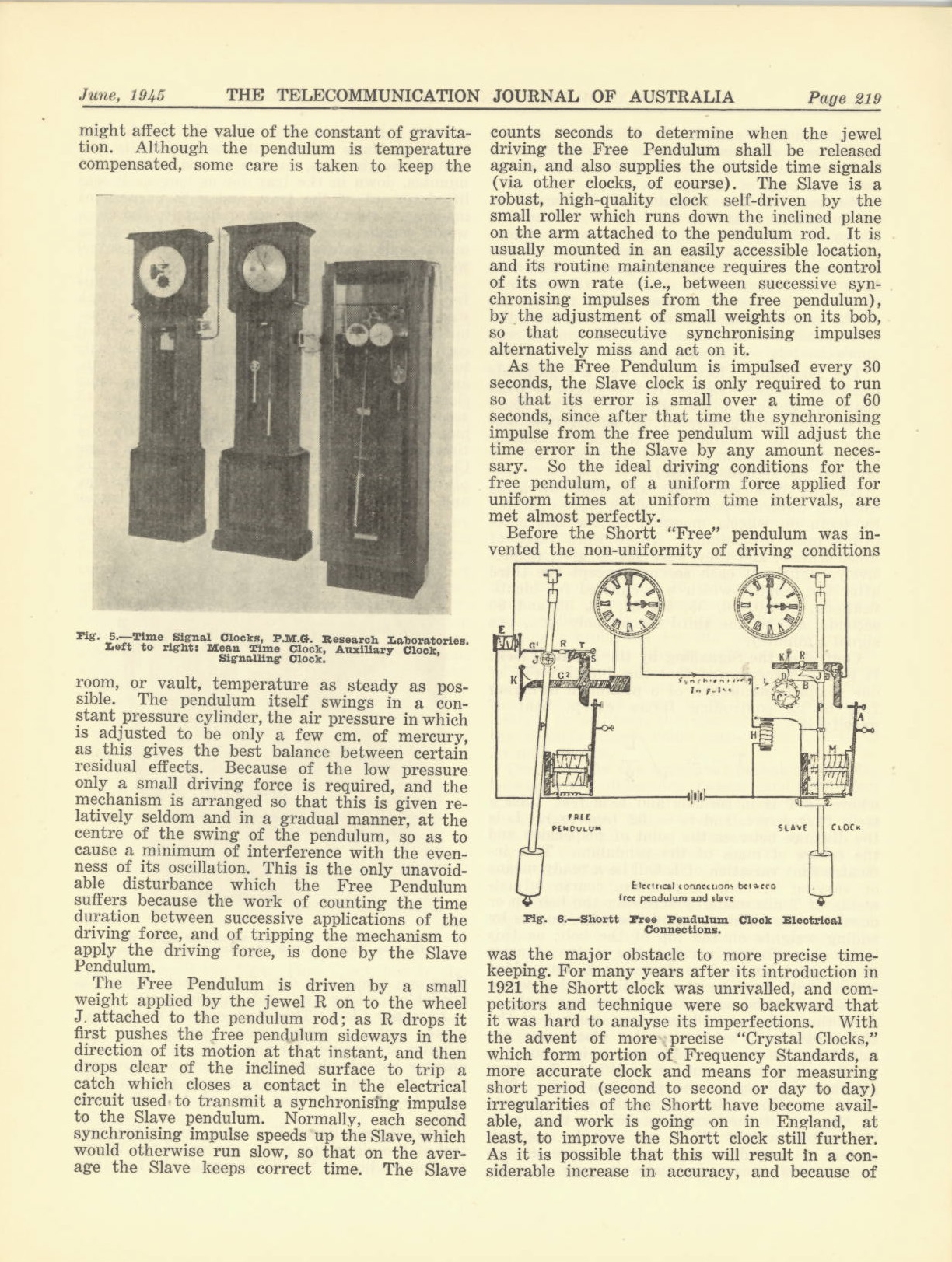 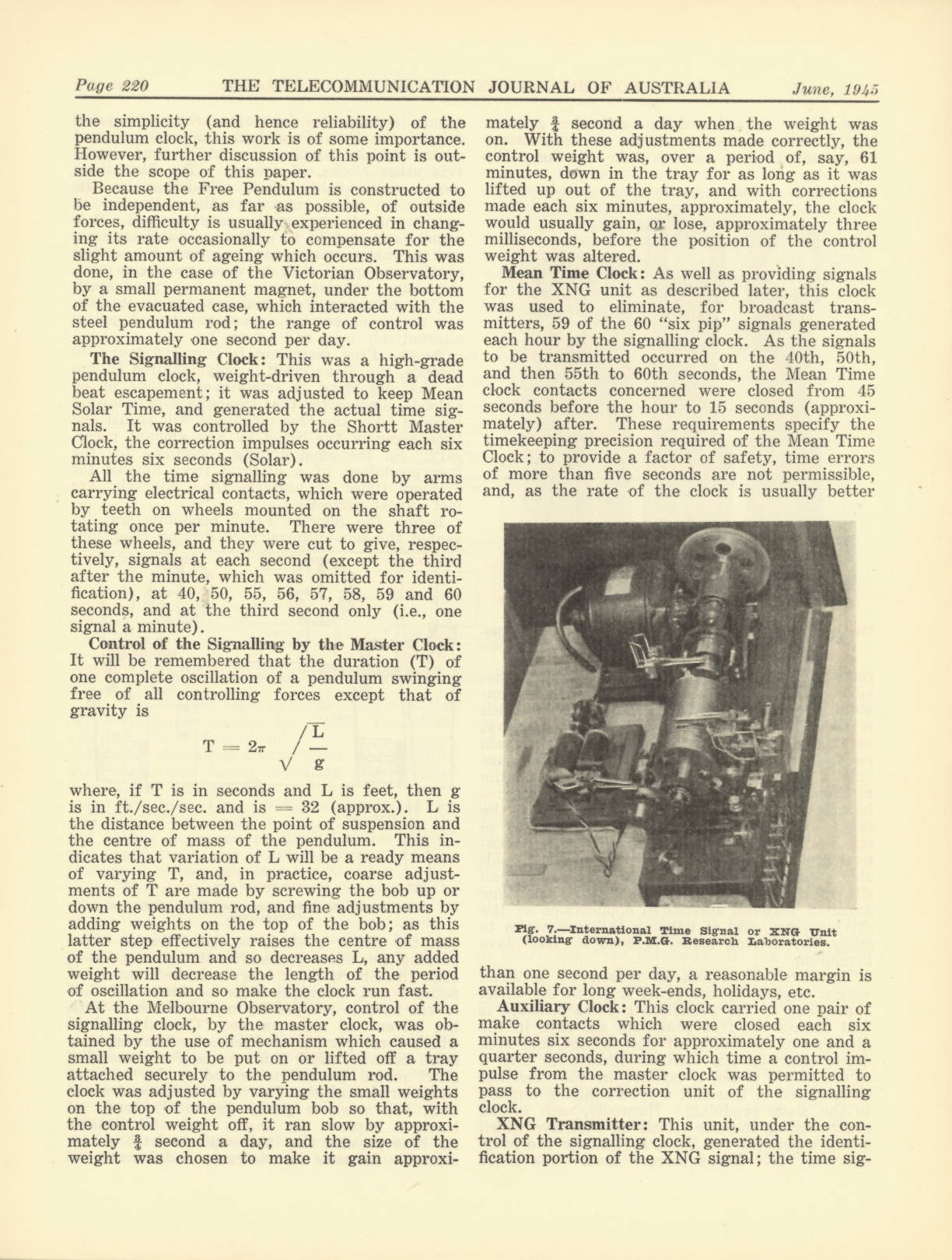 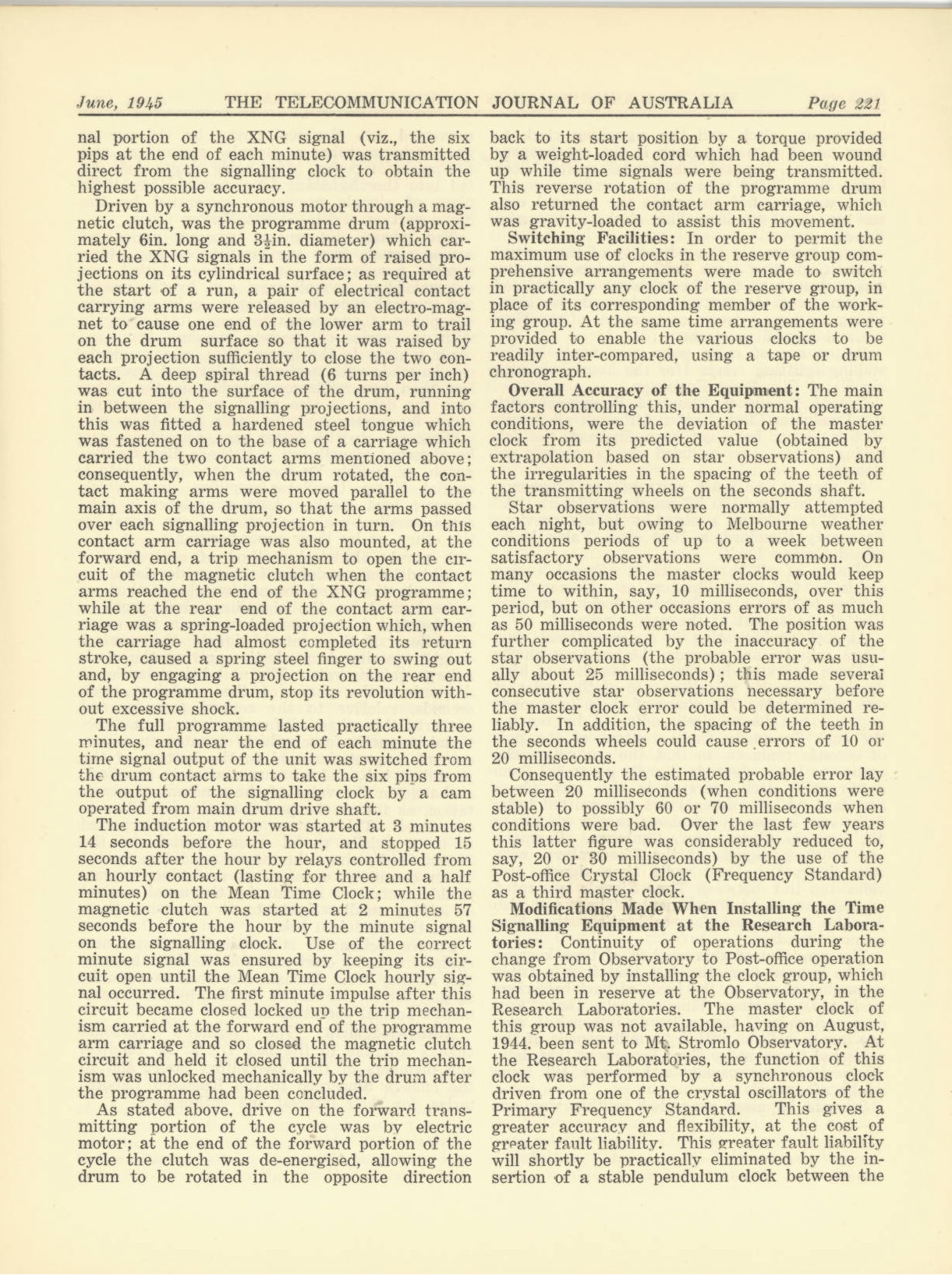 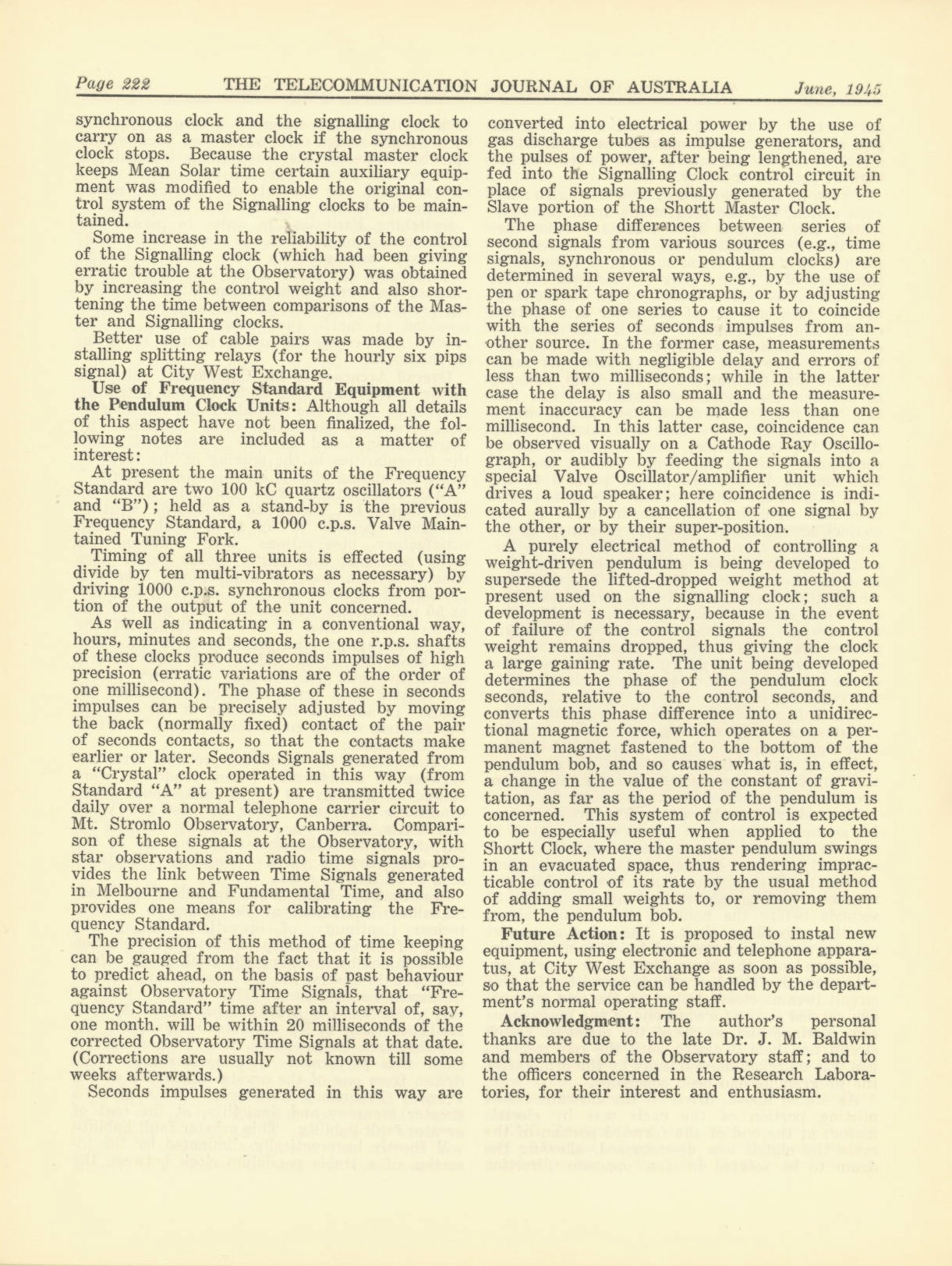