A remarkable paper from 1961 demonstrates that the Post Master General?s Department was at the forefront of technological developments concerning radio communications by artificial satellites before the launch of Telstar.

It is widely acknowledged that Arthur C. Clark?s paper on Extra-Terrestrial Relays published in Wireless World in October 1945 (Clark 1945) conveyed his most prescient prediction ? that geostationary satellites could provide global communications.  It should be remembered that only German V2 rockets existed at the time and Clark?s proposal also necessitated the future development of rockets sufficiently powerful to deploy such satellites.

The historic paper (O'Grady & Craig 1961) was written only 16 years later and demonstrates a thorough understanding by the Post Master General?s Department (PMG), of the engineering principles of satellite communications. This paper preceded the launch of Telstar by NASA in July 1962 and Early Bird in April 1965, which later became Intelsat 1.

The paper is by F P O?Grady, then Deputy Director General of the PMG and E R Craig, Divisional Engineer at the PMG Research Laboratories. The introduction provides a broad overview of the communication technologies available in 1961, which is fascinating in itself. But the detailed analysis of satellite technology is what surprises the reader. Many pages are provided of path loss formulas, system parameters, orbital conditions, antenna ratings and even low earth orbit designs for television.

The PMG was clearly well versed in the possibilities of satellite communications for Australia before the launch of Telstar.

It is timely for the Journal to publish this article in the year in which NBN? (NBN Co) plans to launch two new generation Ka band satellites, each to provide an aggregate of 80 Gbps of bandwidth to remotely located subscribers in Australia, rationed at a wholesale rate of 25 Mbps per subscriber (Locke 2015). 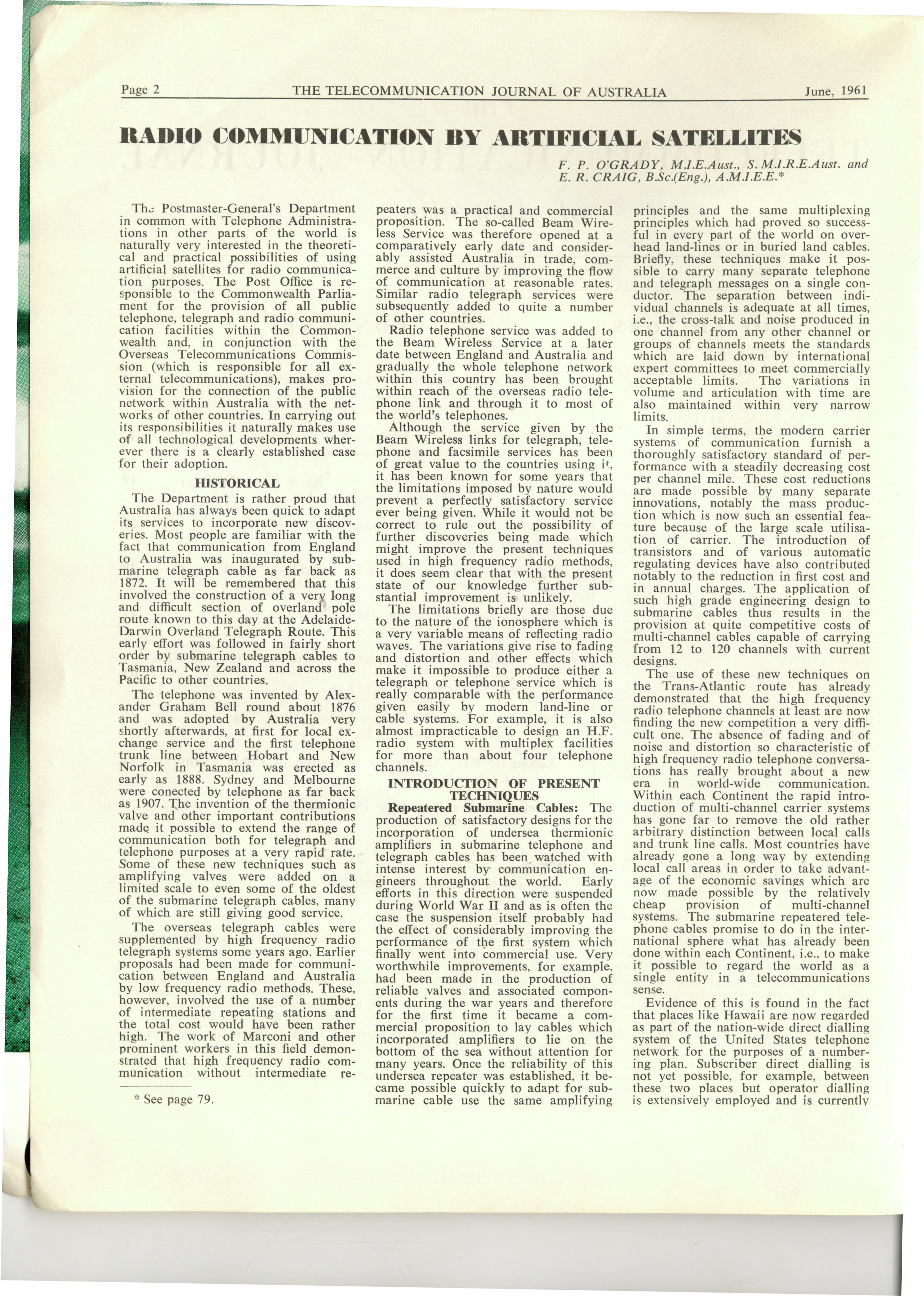 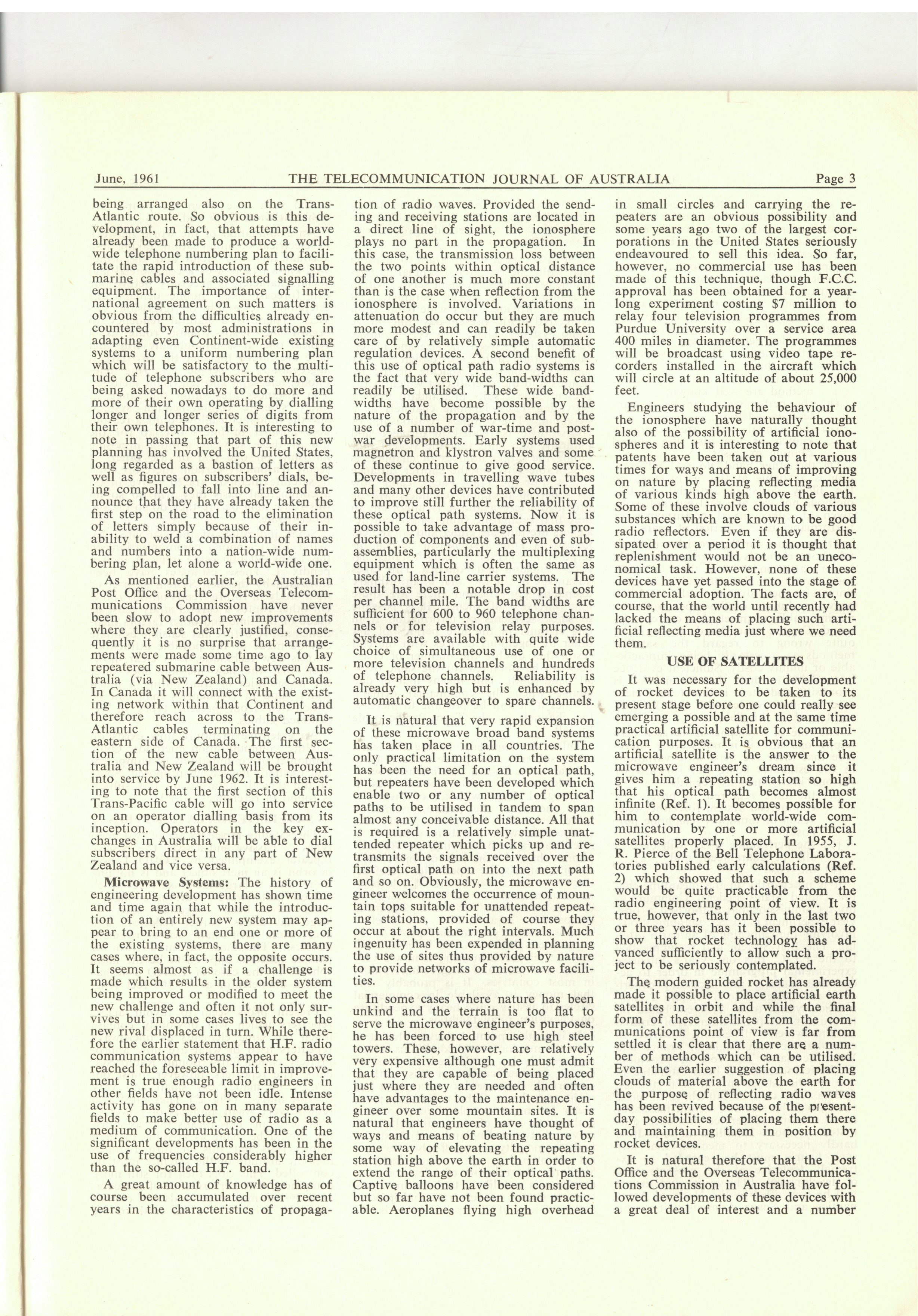 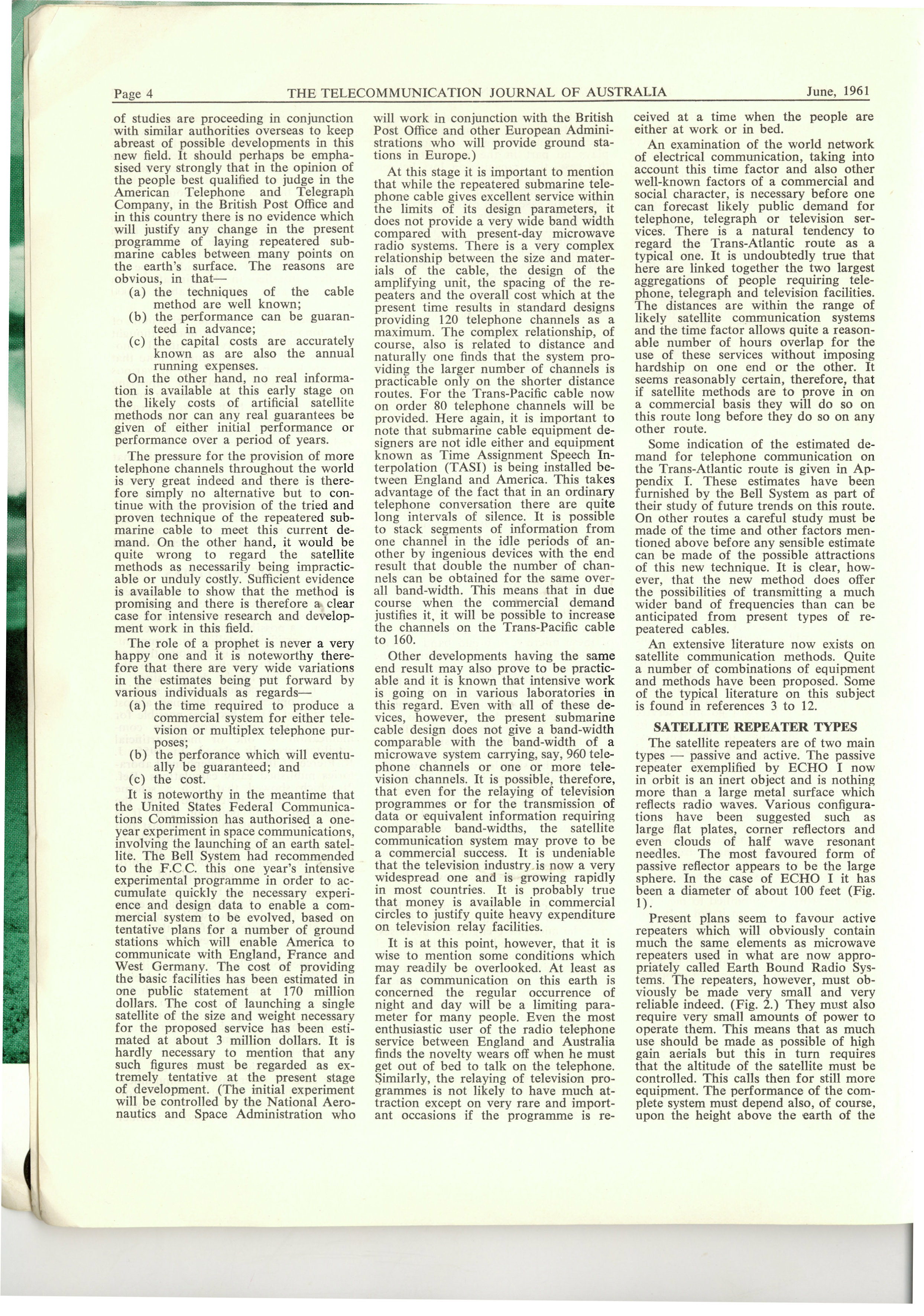 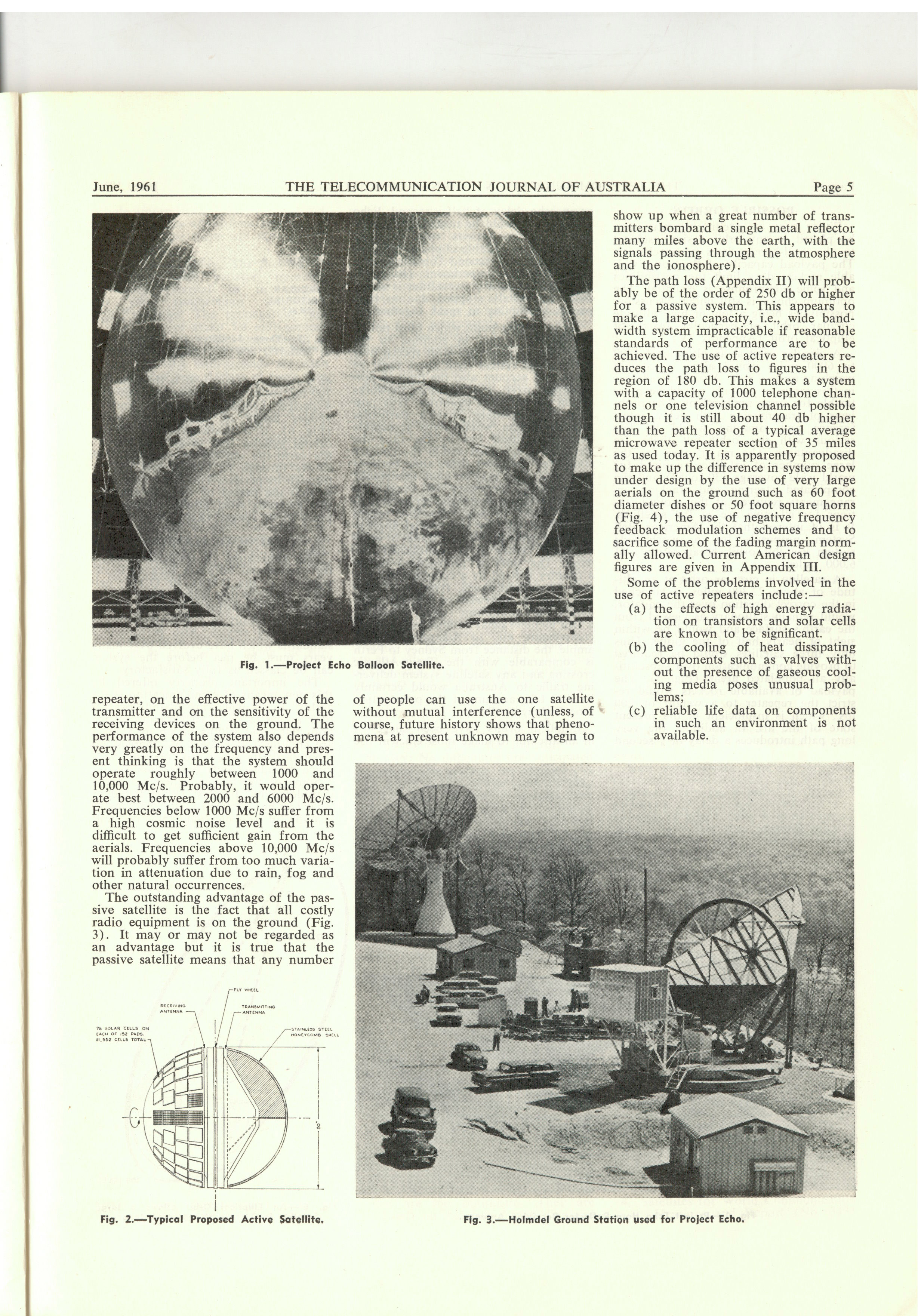 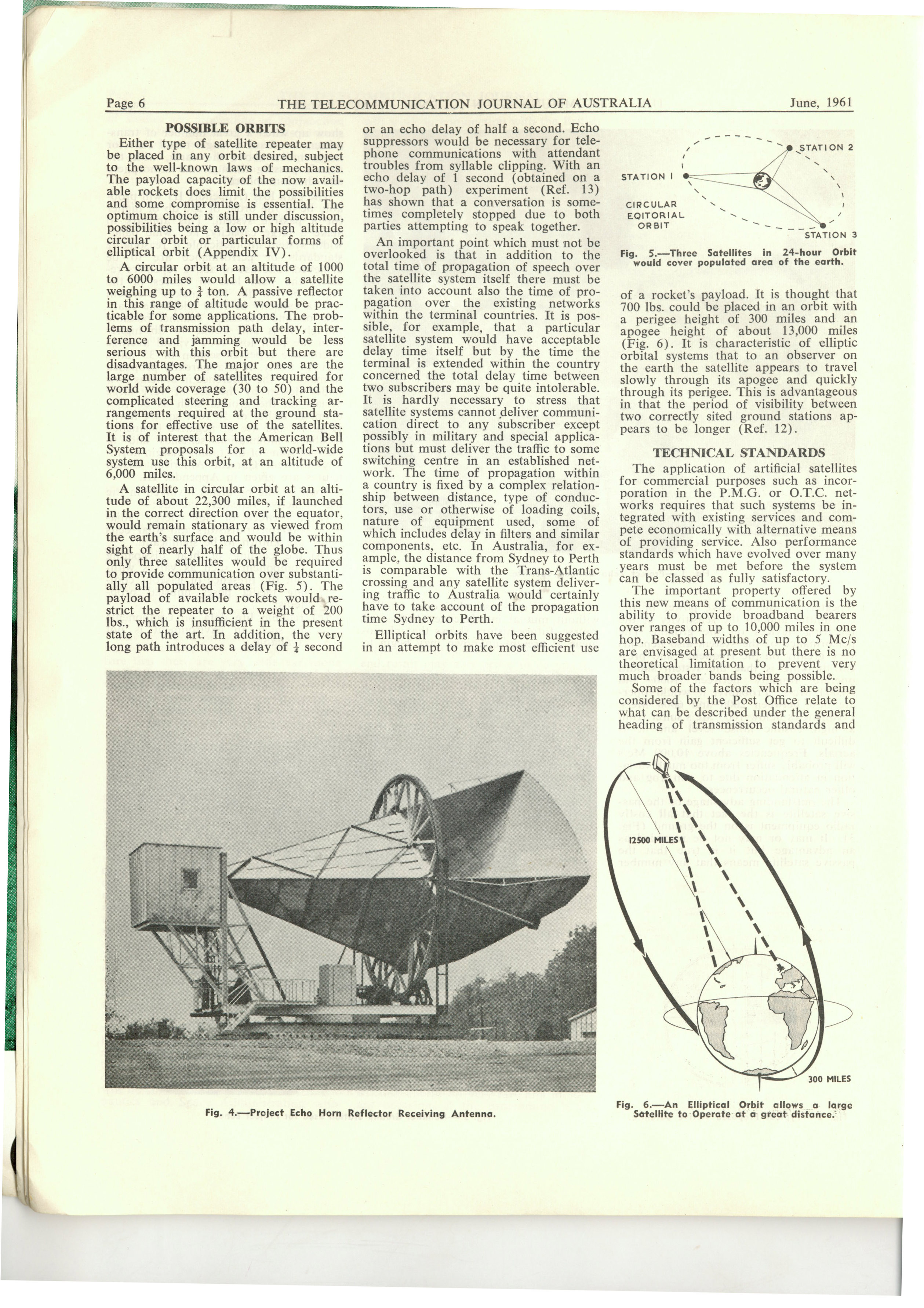 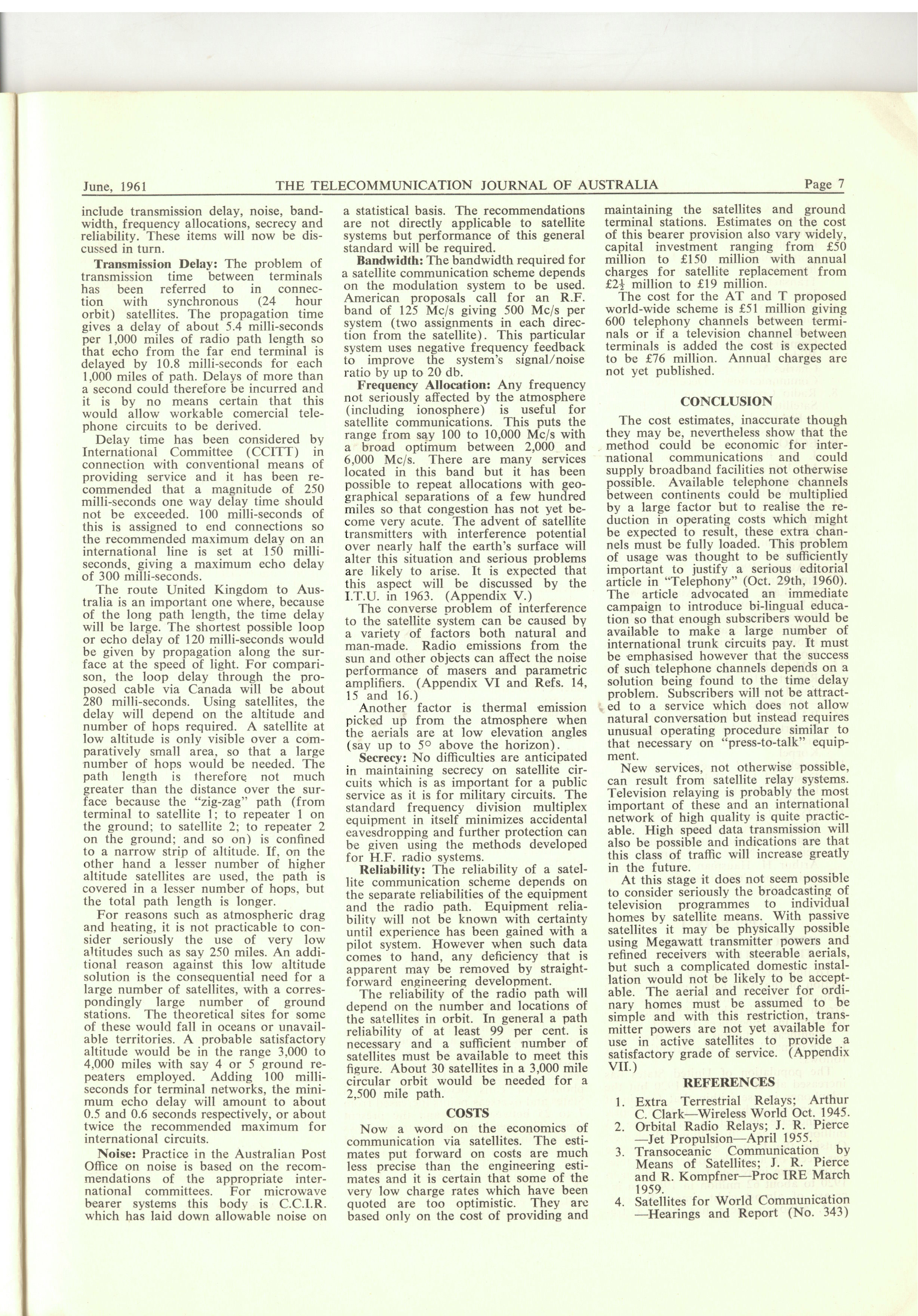 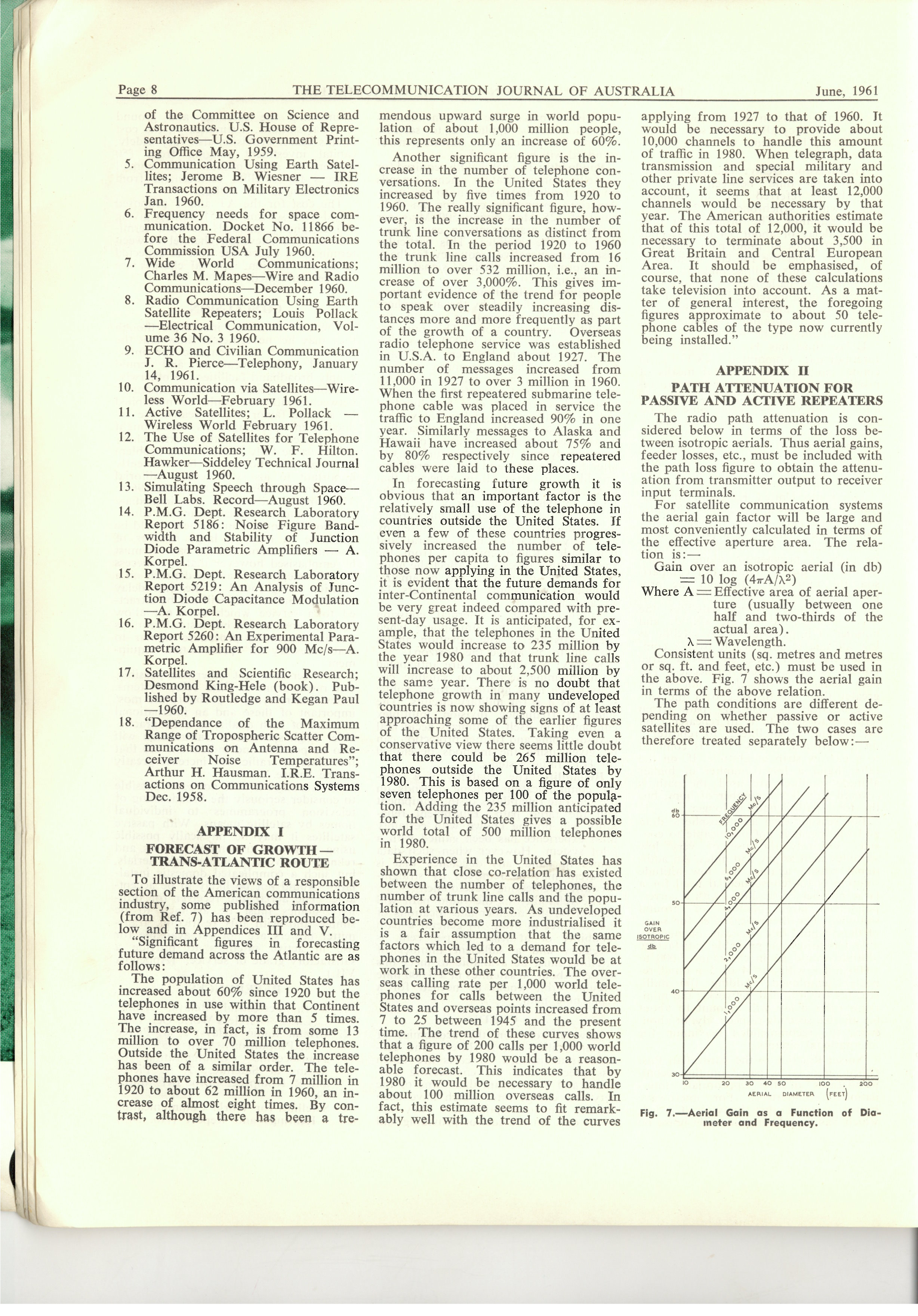 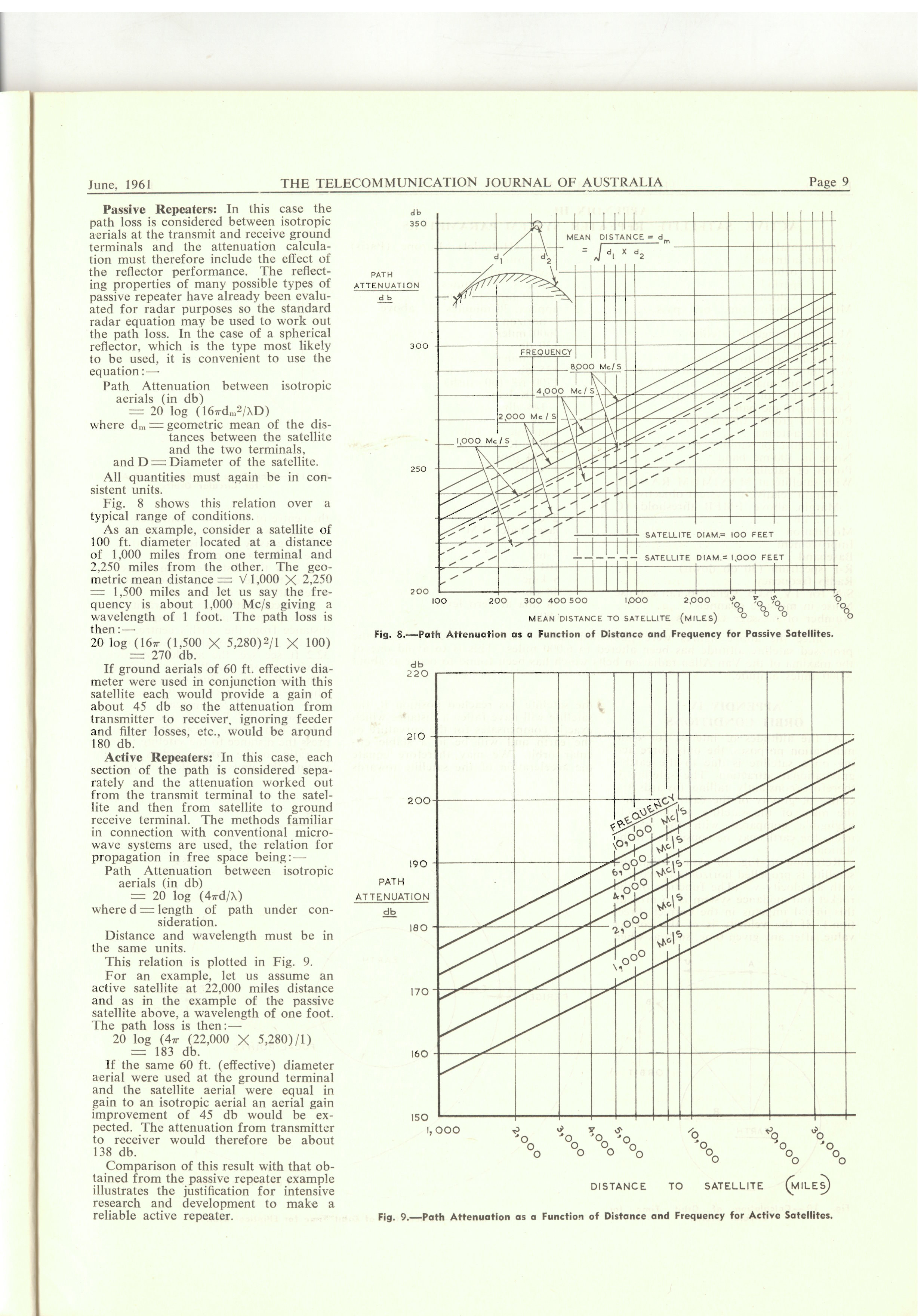 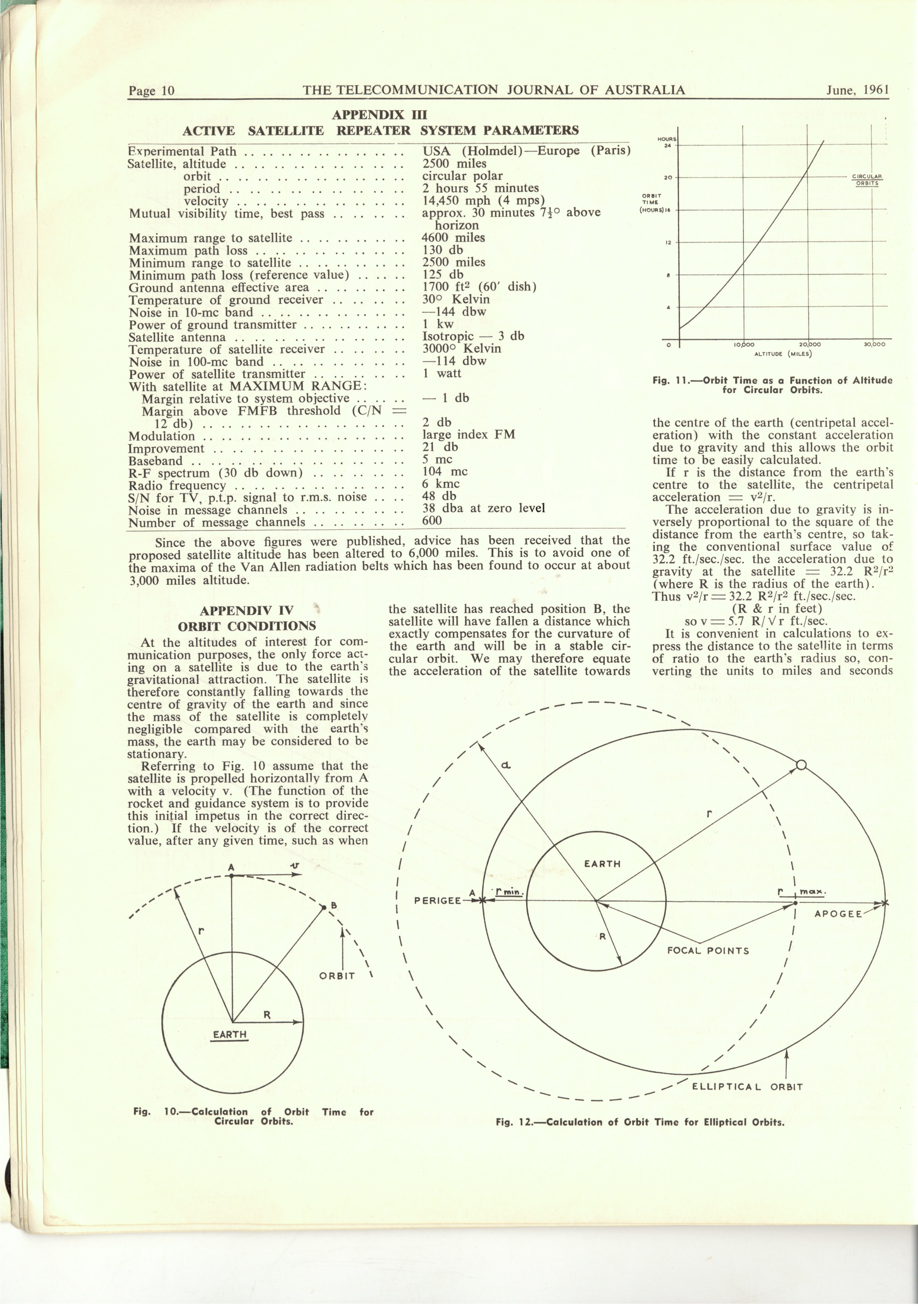 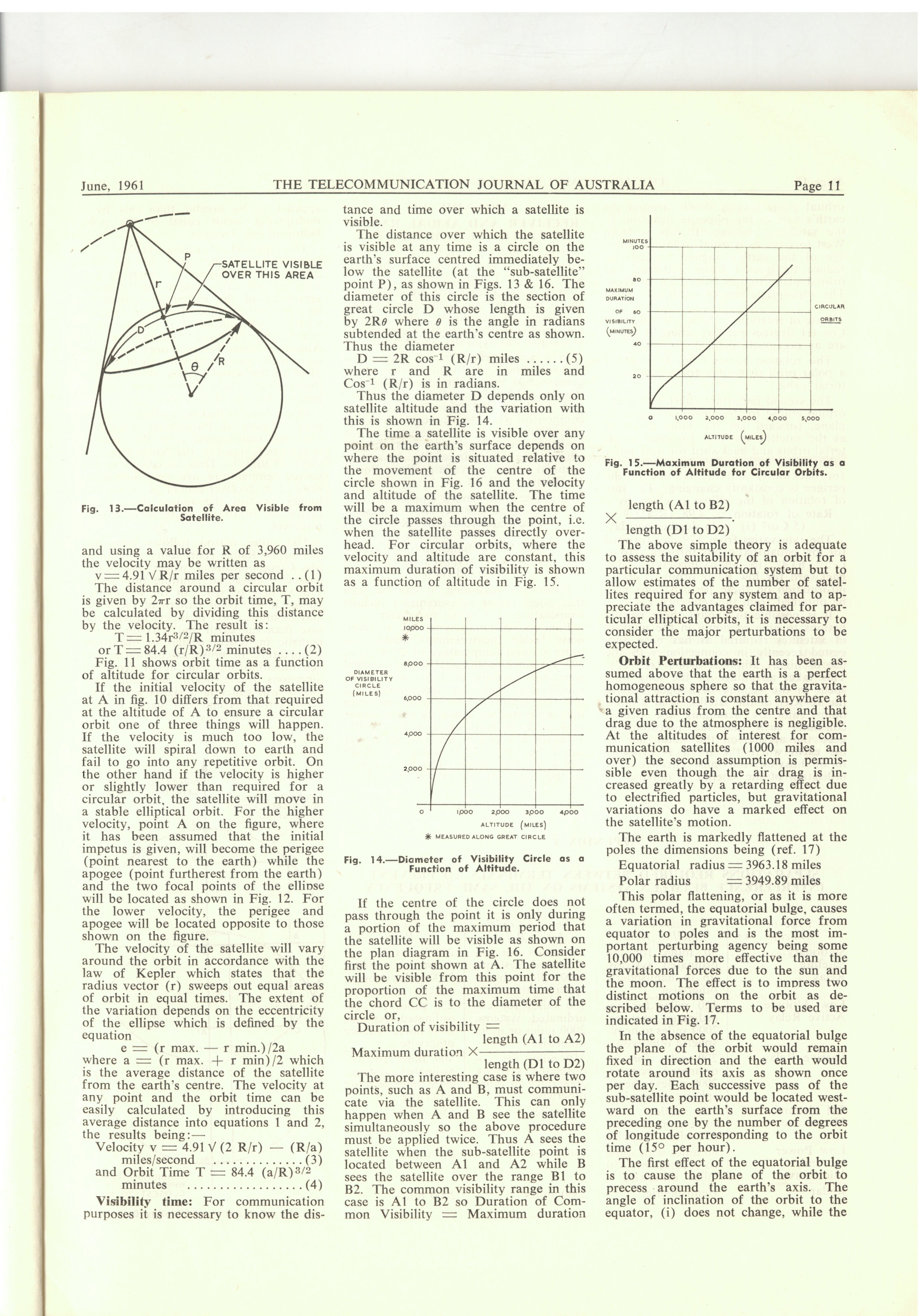 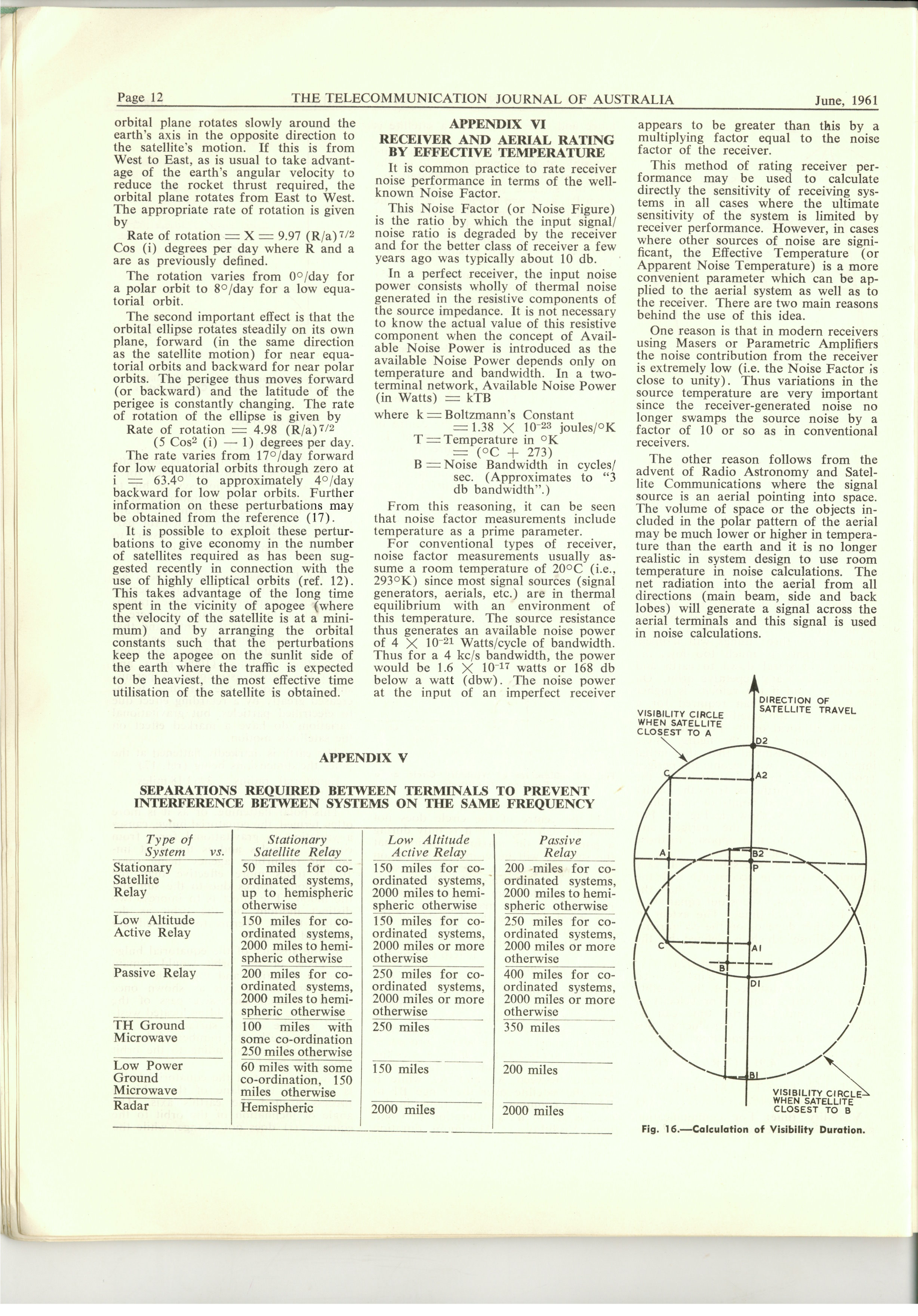