A historic paper from the Journal in 1976 regarding the colour conversion of transmitters in the National Television Service by Telecom Australia (now Telstra).

The National Television Systems Committee was formed in the United States in 1950 to research the problems associated with colour television. The Radio Corporation of America (RCA) played a large part in development of a compatible system adopted by the committee called the NTSC system. (Hutson 1971) The United States commenced regular colour television broadcasts in January 1954 and well before the introduction of monochrome television in Australia in 1956 and in time for the Olympic Games in Melbourne.

The new colour system was compatible in both directions, meaning an existing monochrome receiver was able to display a monochrome picture with a colour broadcast and a colour receiver was able to display a monochrome picture with a monochrome broadcast. The NTSC system however had some drawbacks such as phase distortion which caused hue or colour errors. This led to the NTSC system being referred to as ?Never Twice the Same Colour? by broadcast engineers.  In 1958, Graham Kennedy of Channel 9 fame, visited the United States and witnessed a number of colour television broadcasts. He was impressed but only saw the system on expertly-tuned studio monitor sets. Kennedy said of the NTSC system, "I believe however it can be a tricky business for the viewer with a clutch of knobs to twiddle on your set and if you are not too expert you get green cows, white grass and purple people eaters would probably come out tartan" (Blundell 2003)

Whilst Australia was far behind the United States in the race to introduce colour television, we eventually chose a variant to the NTSC system called PAL which was developed at the Telefunken Laboratories in the German Federal Republic.  The system was designed to reduce the effects of phase distortion on the colour signal. (Hutson 1971)  In 1967 the PAL system was adopted by the German Federal Republic and the United Kingdom.

?The timing of the introduction of colour television into Australia is a matter for decision by the Government at the appropriate time. Consideration of all the factors relevant to the matter including the experience of overseas countries in colour television suggests the desirability of a cautious approach. The matter of colour television, having regard to its complexities, is unlikely to be considered and decided in a way which would not leave manufacturing interests ample time to prepare themselves before final Government decisions are made. The Australian Broadcasting Control Board recently obtained the views of industry in this country on the question of technical standards considered appropriate for Australia? (Hansard 1966).

On 15 February 1972, the Prime Minister William McMahon announced that colour television would be introduced on 1 March 1975, allowing the local broadcast industry three years to convert to the PAL standard that had been adopted by the Australian Broadcasting Control Board (PM Transcripts 1972).  The National Television Service would be updated to colour on a phased basis due to financial constraints brought about by Australia?s continued participation in the Vietnam War (Gyngell 1998).

The historic paper (Lees & Hodgson 1976) details the significant challenges and solutions employed to convert the National Television Service transmitters to colour operation. Telecom Australia?s approach was to modify the existing transmitter equipment wherever possible to minimise the capital expenditure. This presented unique challenges given the equipment had to be operational during the day for monochrome transmissions, then modified and tested during the night with colour and rolled-back by morning when monochrome transmissions resumed. Luckily there were no 24 hour, 7 day transmissions in those days.

Naturally the conversion to colour triggered a number of changes elsewhere in the Telecom?s network such as transmission, not to mention the significant changes at the studio end managed by the Australian Broadcasting Commission and the respective commercial broadcasters.

Additional information on the effects of colour television on Telecom?s network can be found in (Hatfield 1974) and the extensive modifications to the Melbourne Television Operating Centre in (Humberstone & Lock 1976).

Searchable PDF of the original article

(Click on an image for a large sized slide show.) 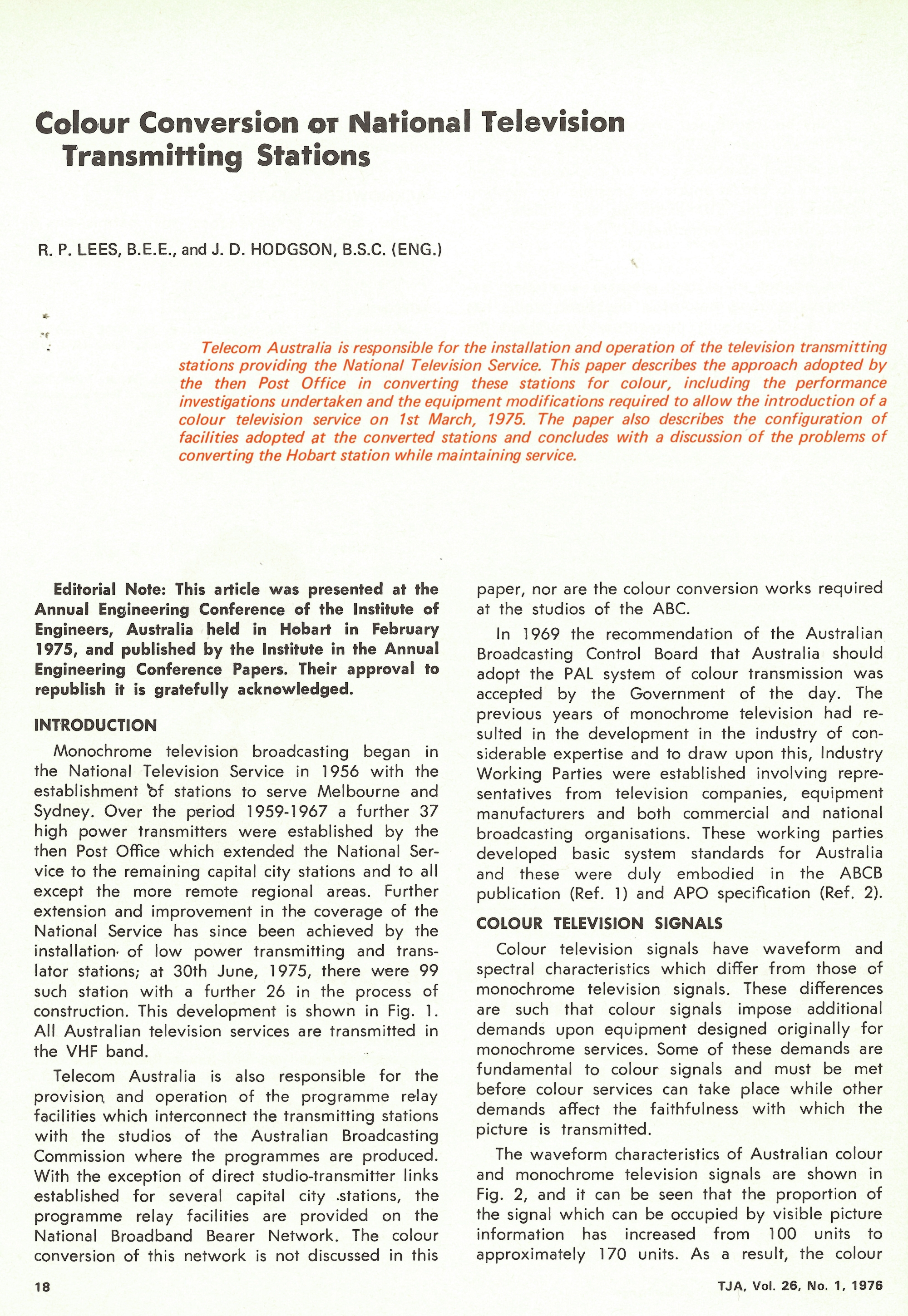 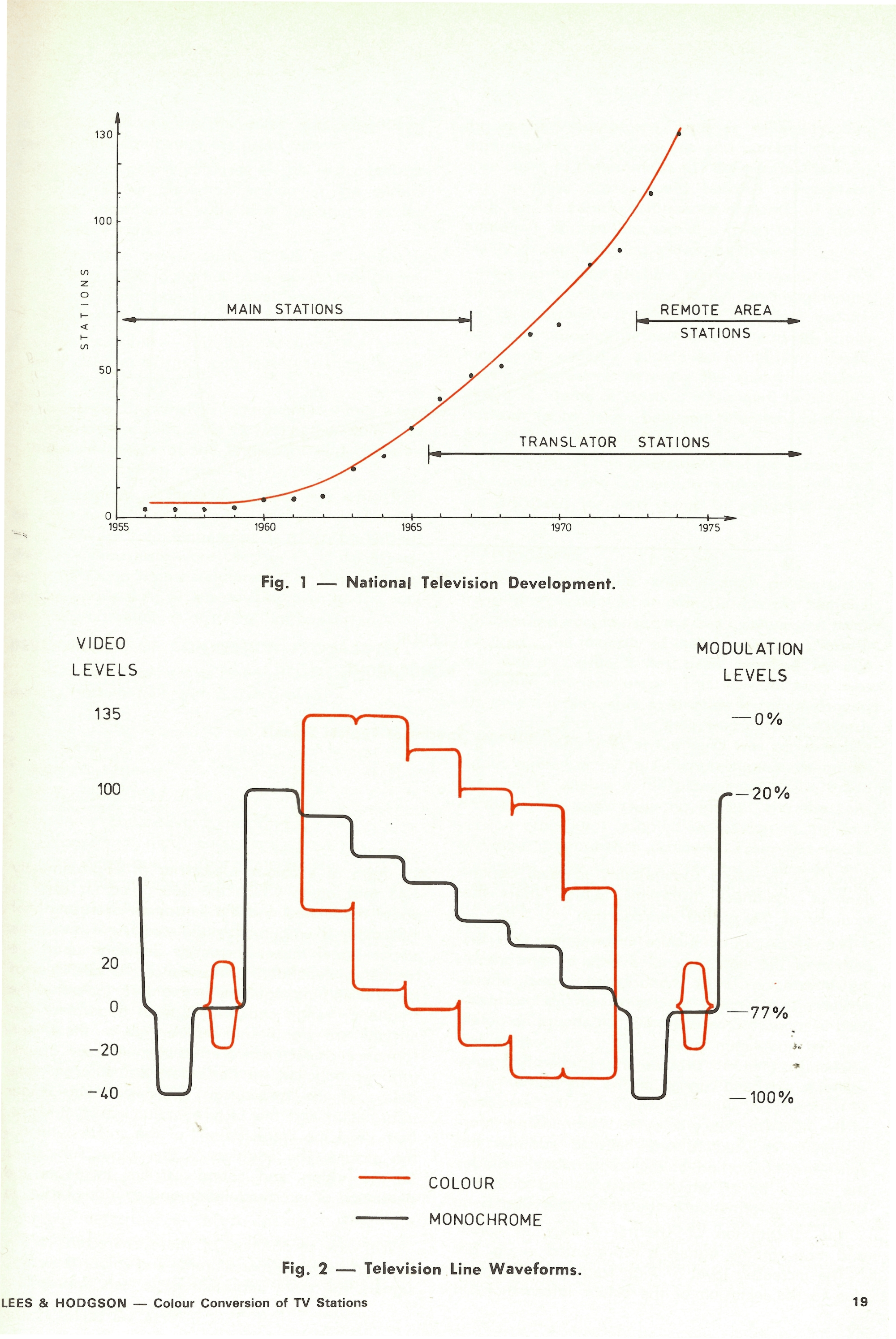 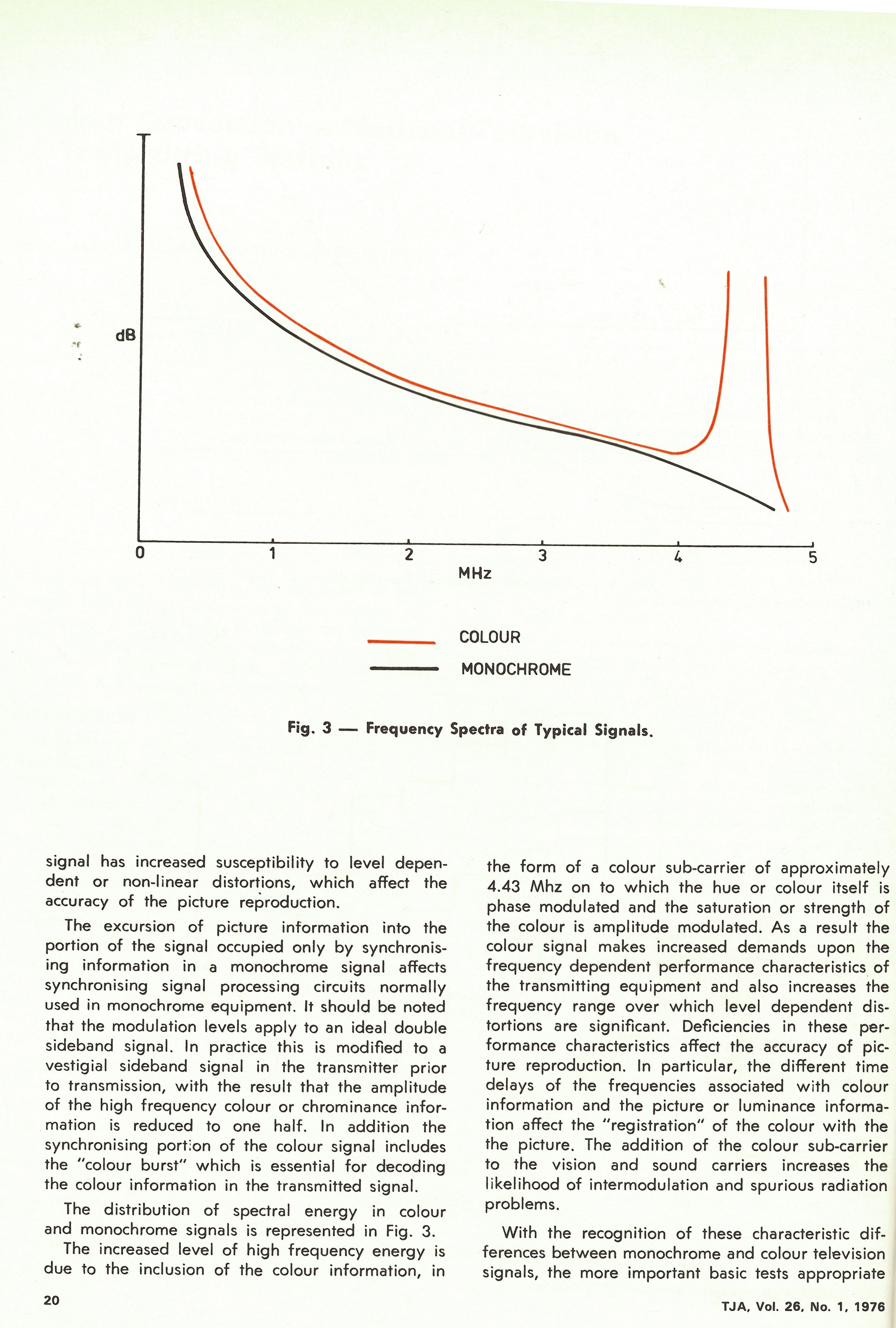 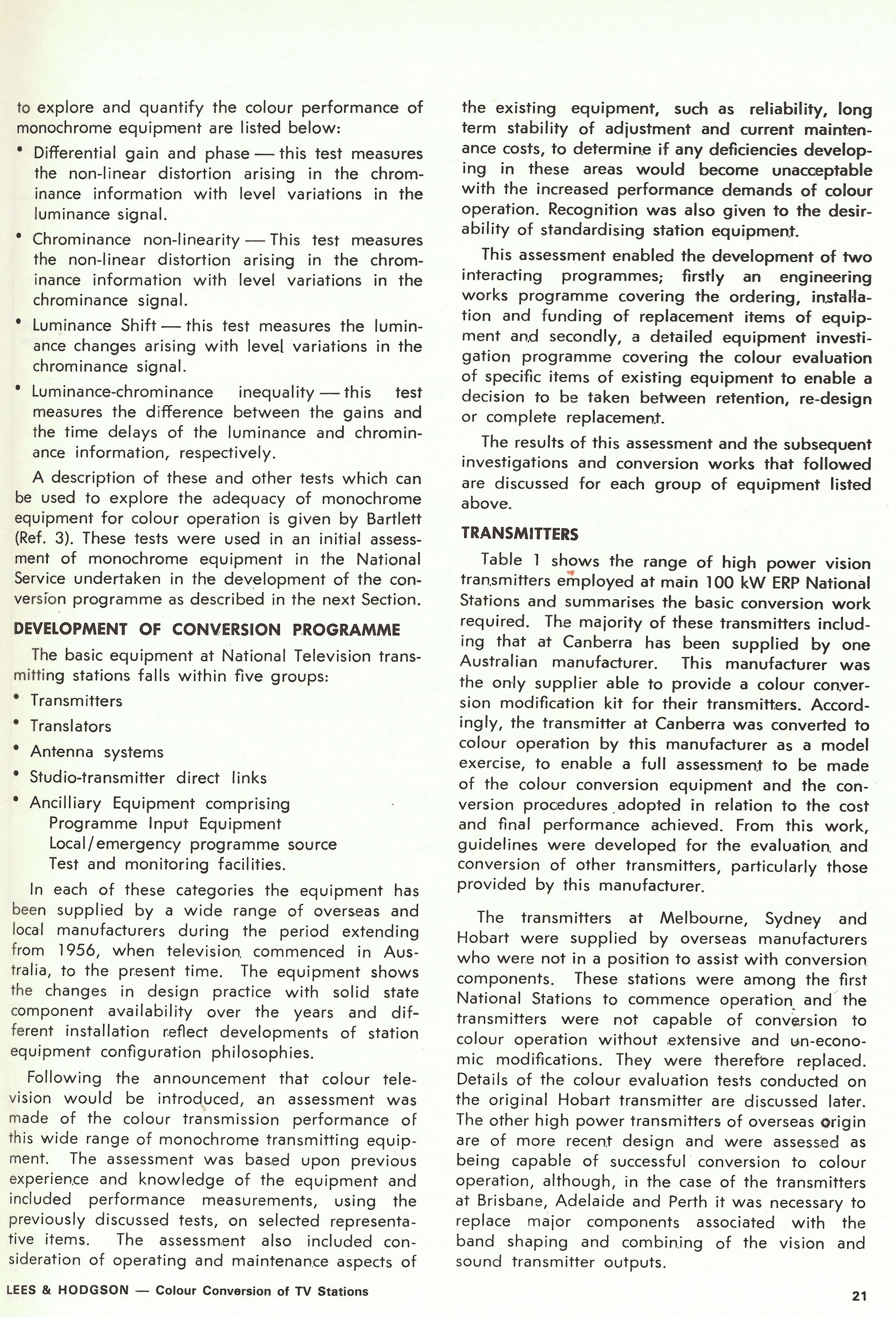 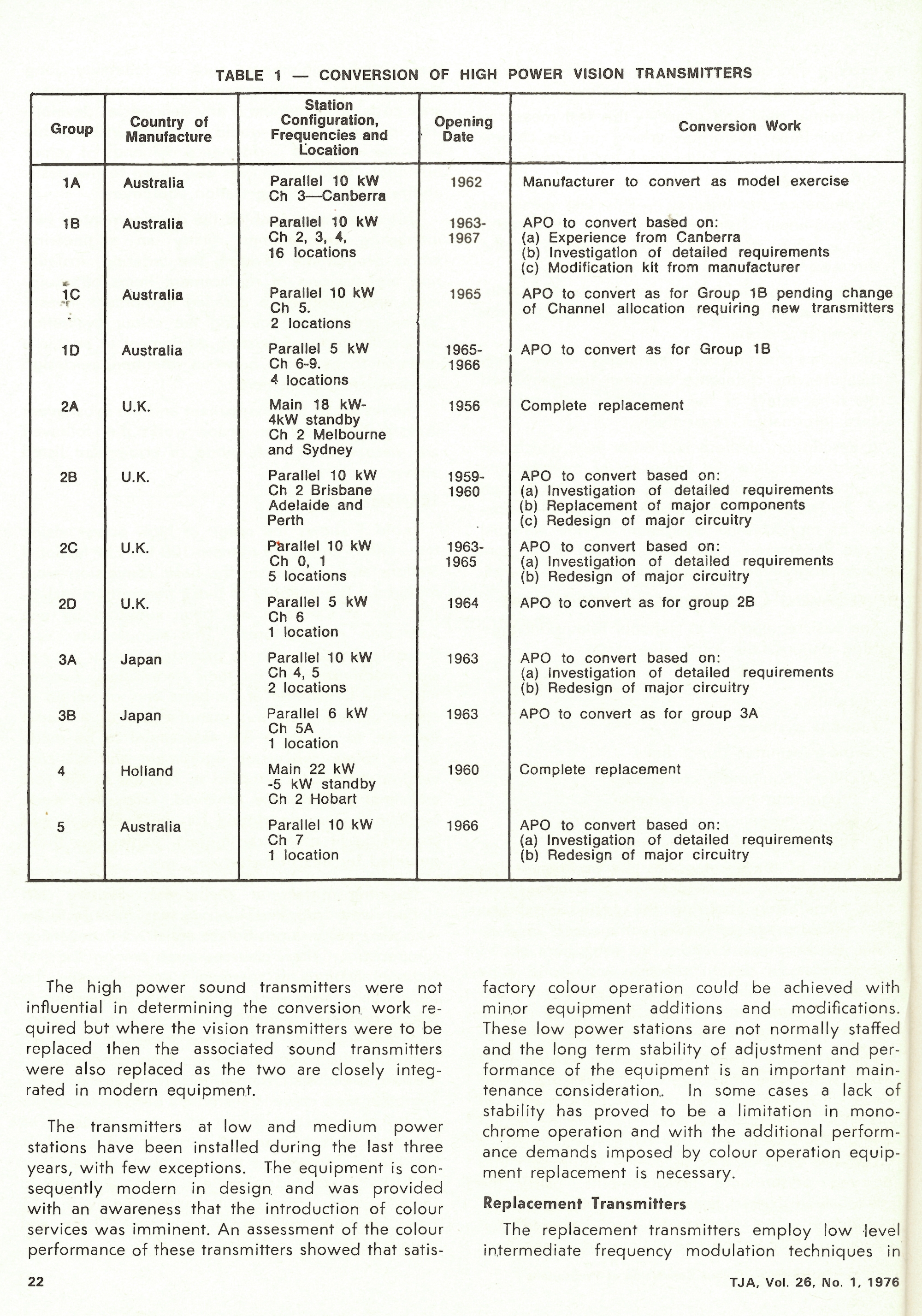 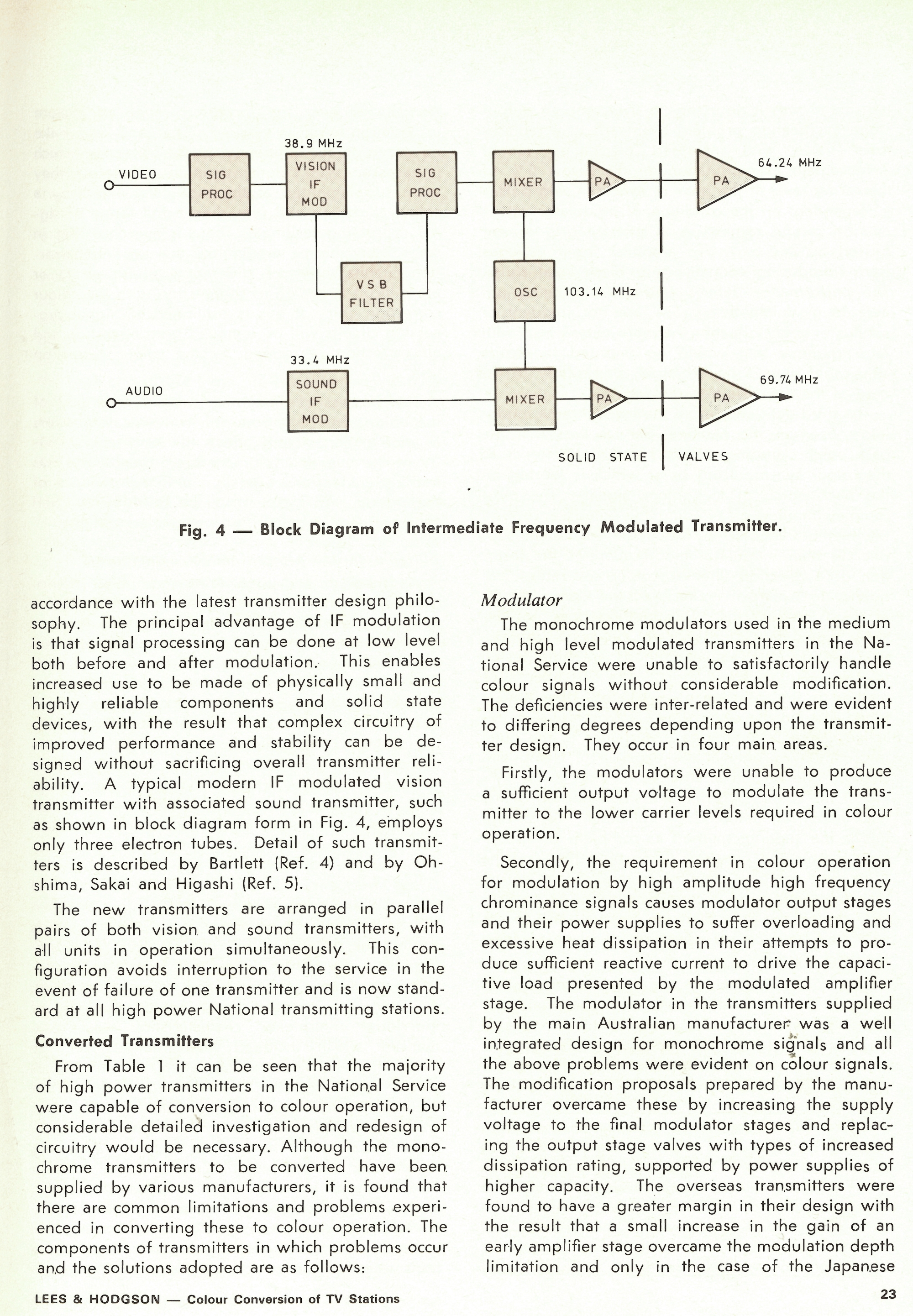 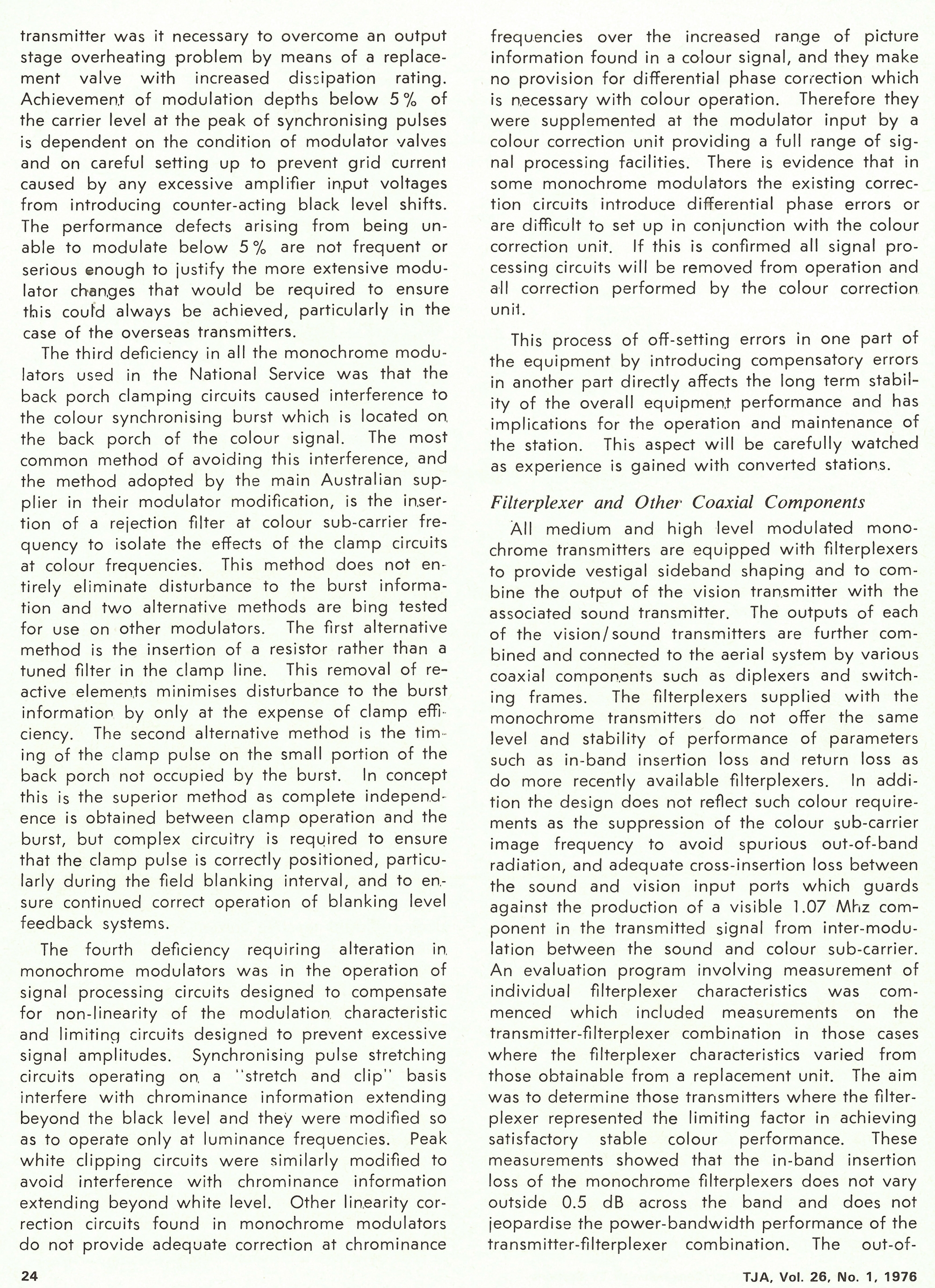 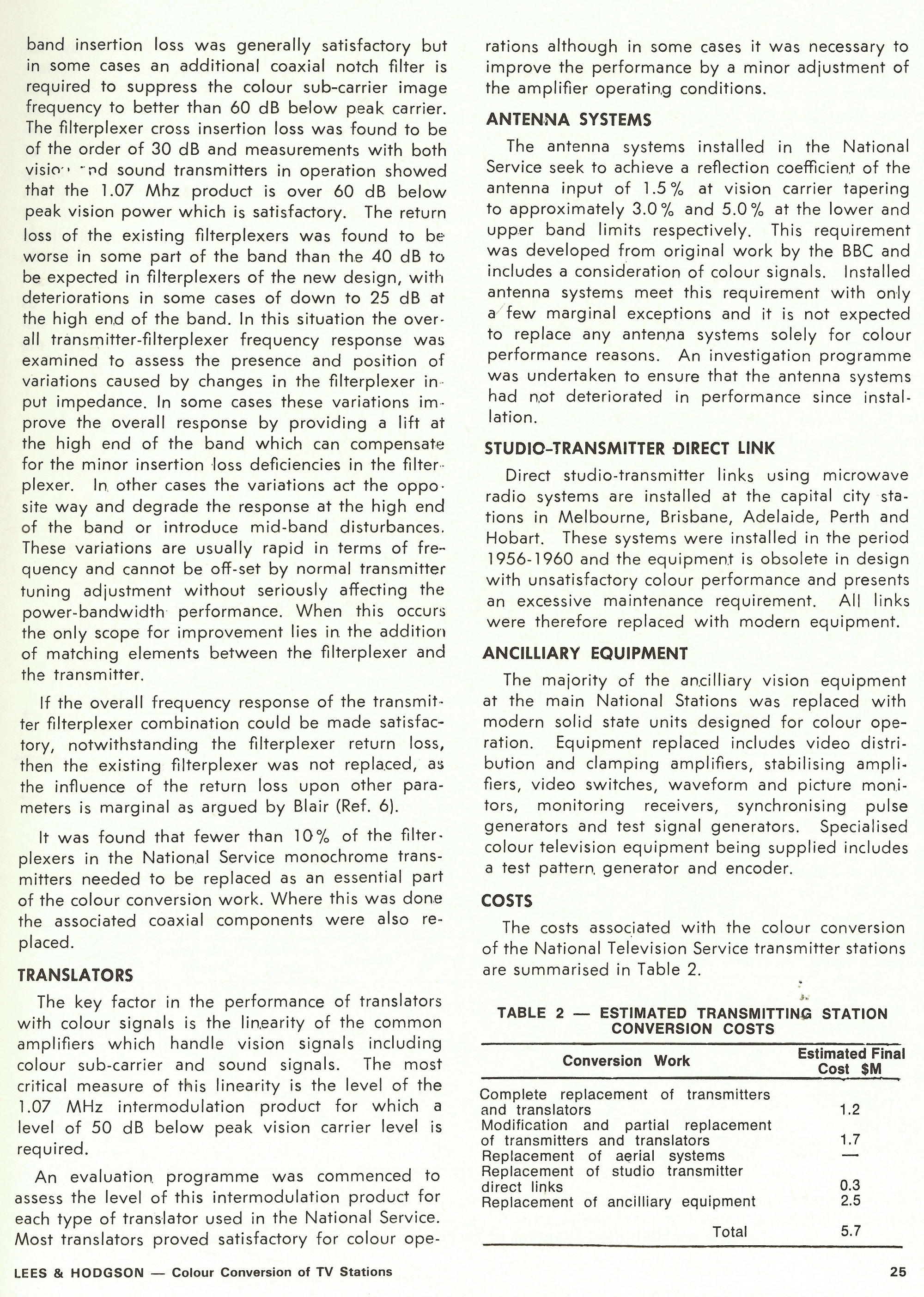 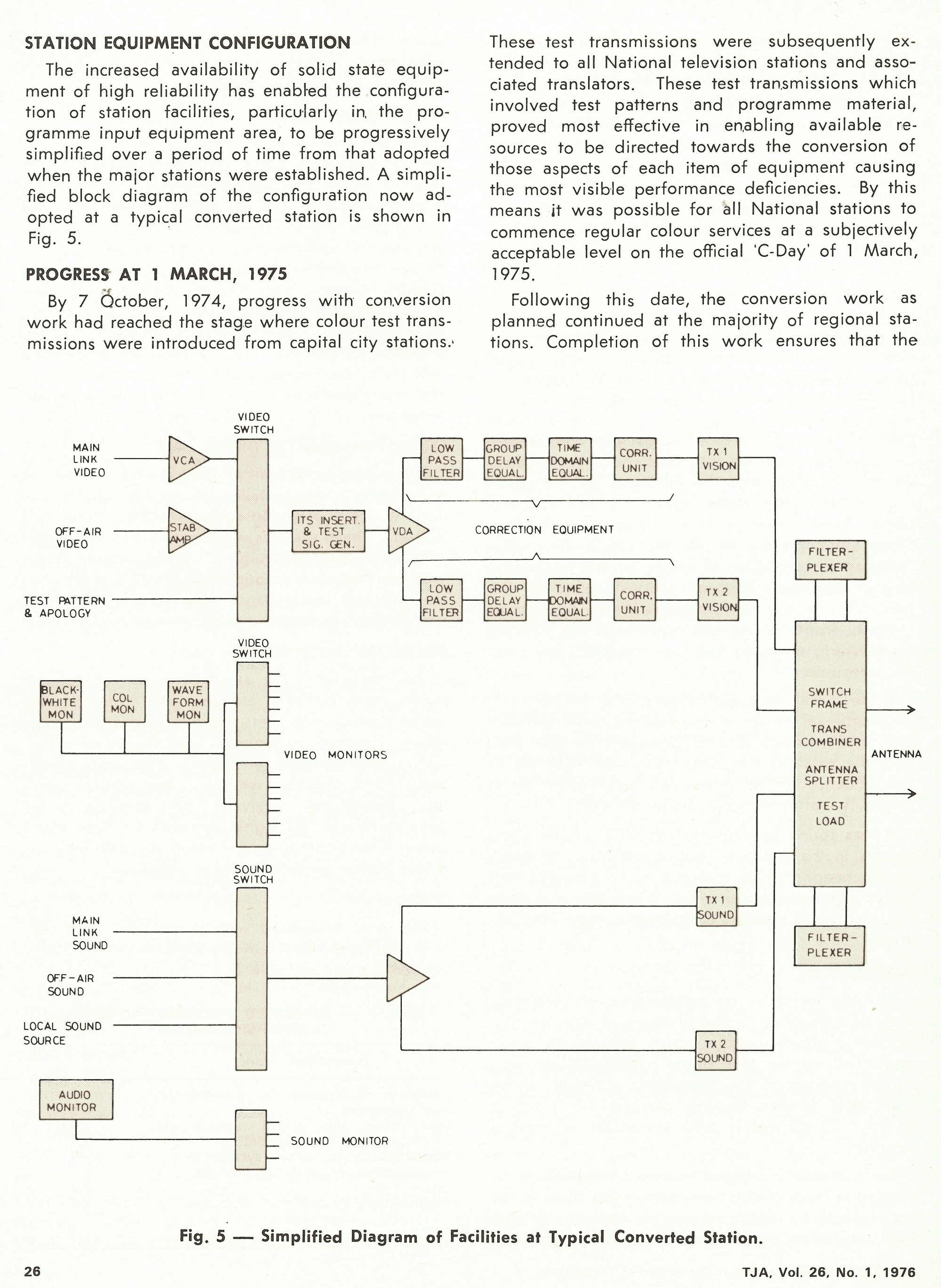 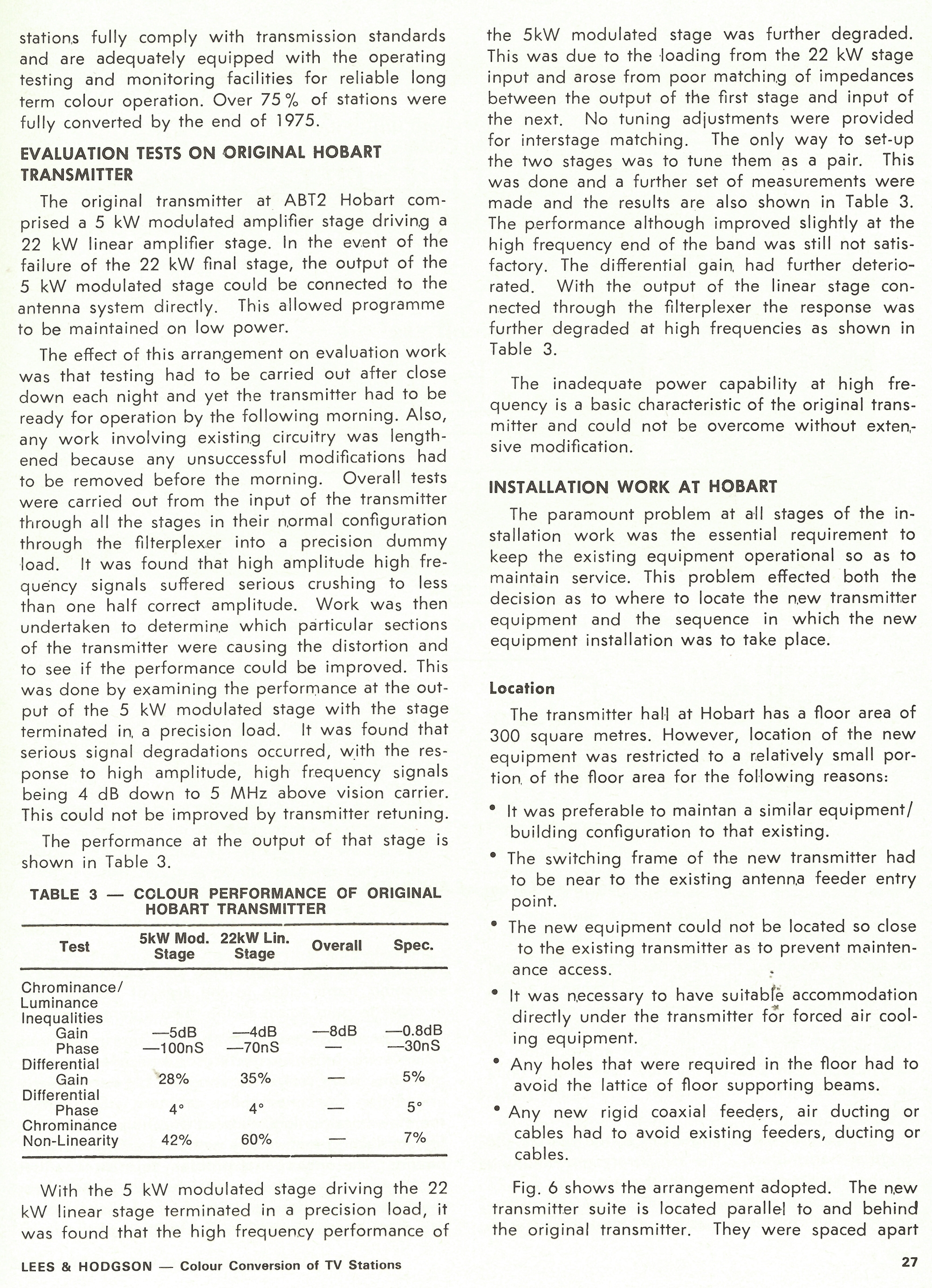 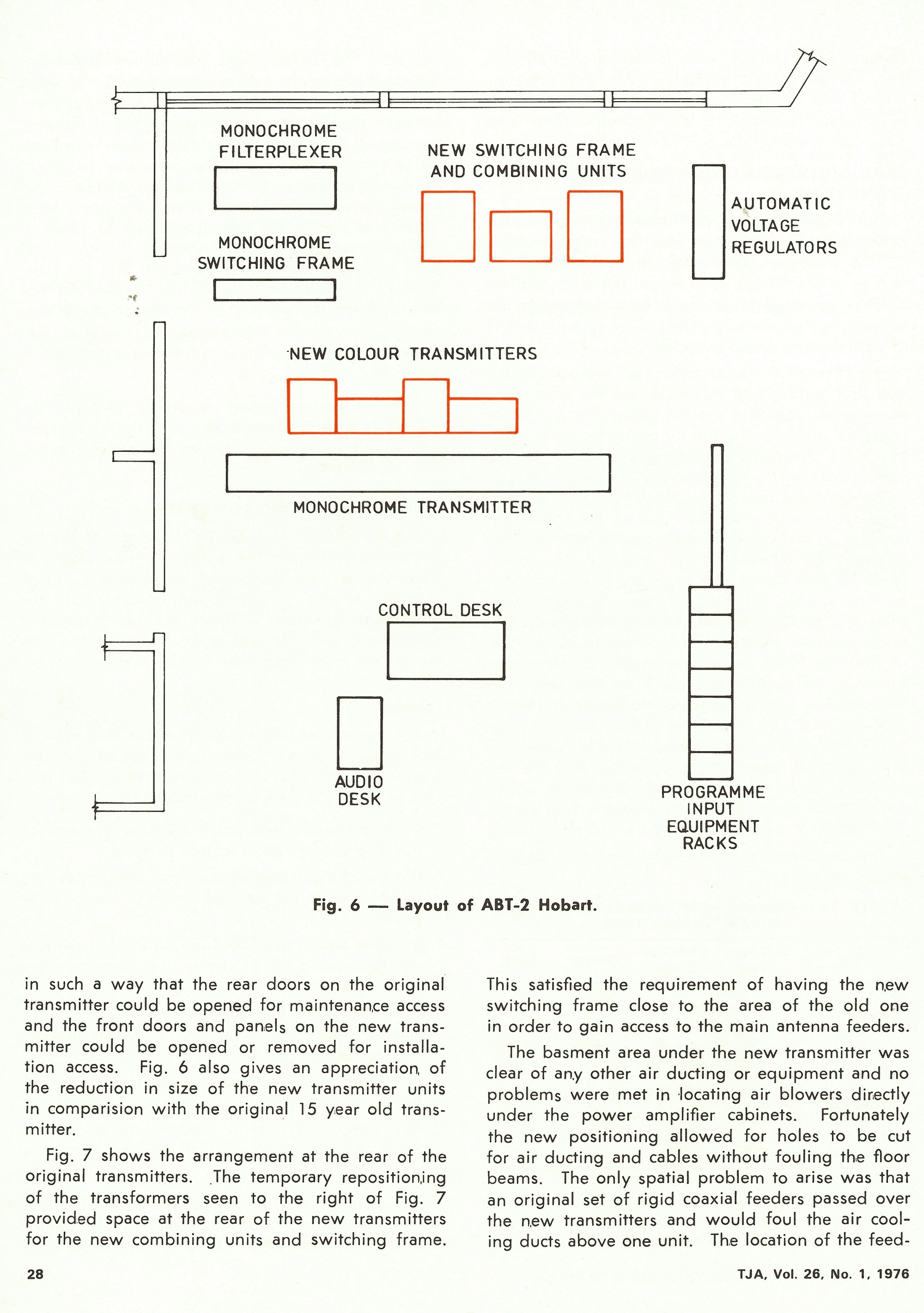 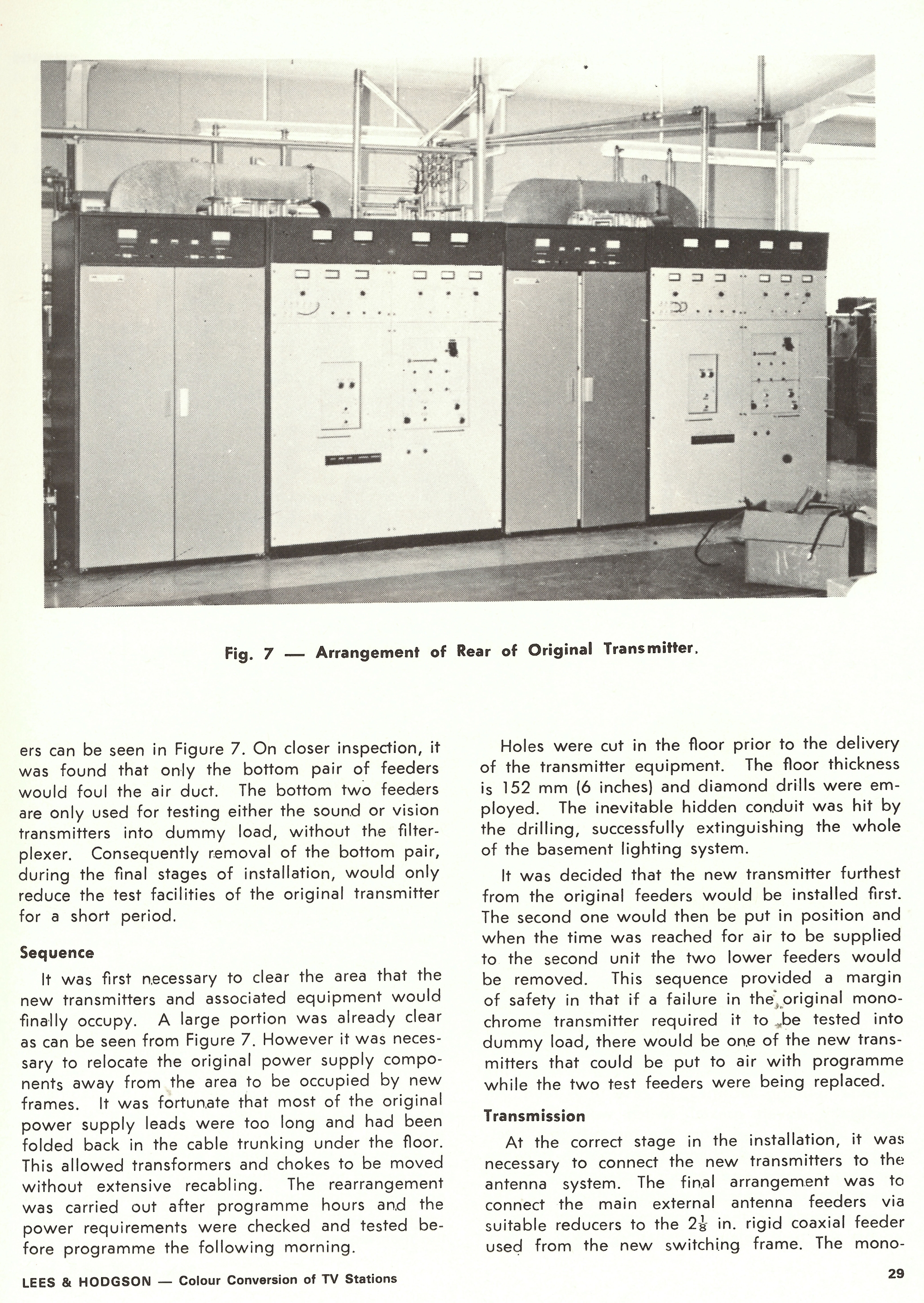 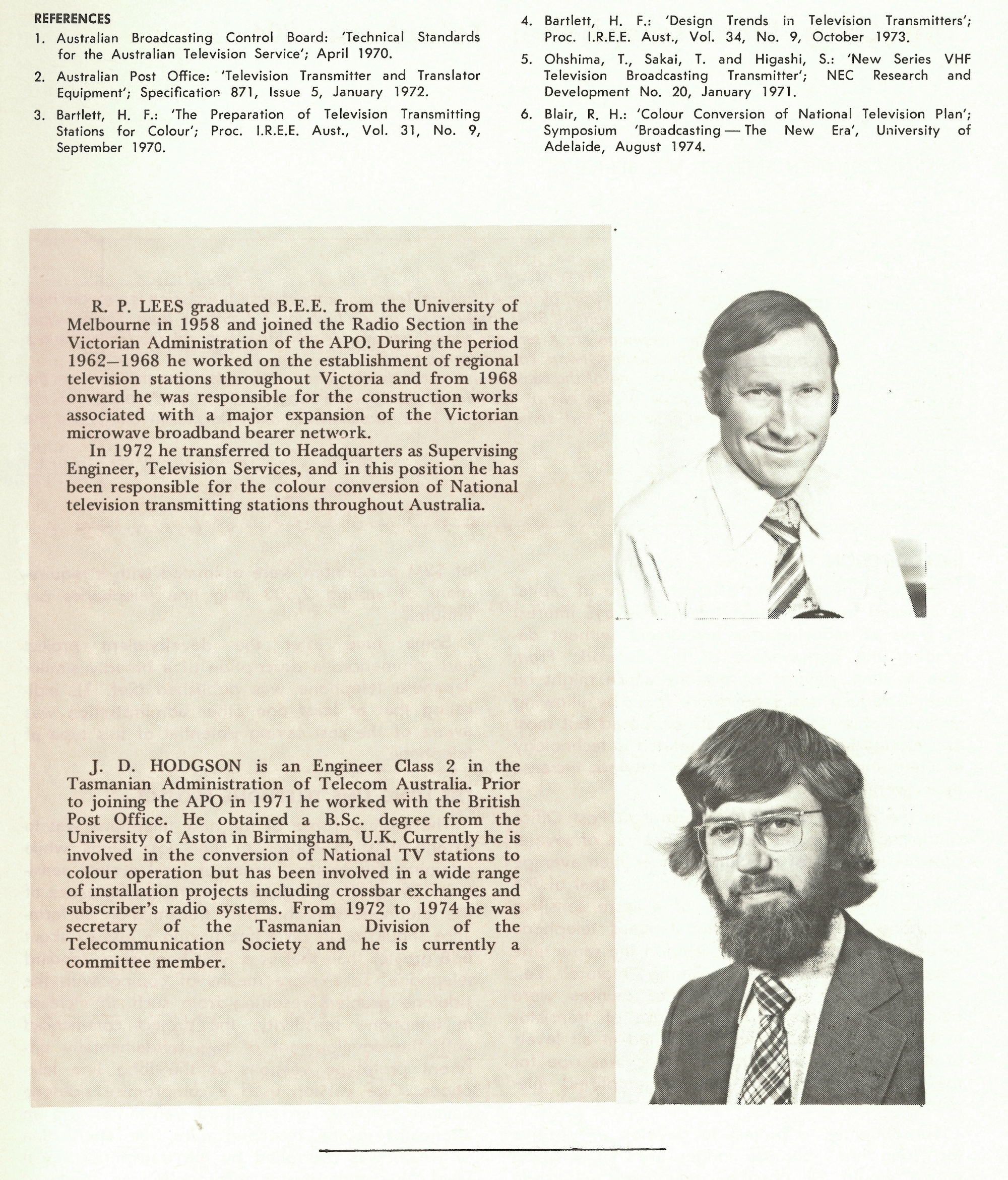