A fascinating paper from 1952 describing the construction of an aerial trunk route and the problems associated with organisation of staff, equipment and materials.

Wooden poles were the mainstay of the telephone network in the early days; however in the USA numerous people including elected officials and newspapers ferociously opposed the erection of telephone poles. They argued that telephone poles were ugly and characterised telephones as playthings of the rich. (Bliss 2008)

By 1901 however, Australians had accepted the importance of communications and Section 51 Sub-section (v) of the Constitution of Australia gives Parliament the power to legislate on "postal, telegraphic, telephonic, and other like services".  These powers were used to merge the colonial mail systems into the Postmaster-General's Department (PMG). This body was responsible for telegraph and domestic telephone operations, as well as postal mail.

The historic paper (Quirk 1952) features the construction of the Seymour to Bendigo pole route by the PMG and the problems associated with organisation of staff, equipment and materials. This route was part of a plan to provide additional circuits between Bathurst and Seymour as back up to the main Melbourne to Sydney trunk route, which follows the main railway through Albury, Wagga, Yass and Goulburn.

The paper details the physical pole configurations to support 12 channels and the selection process to decide the best route. A survey party accurately measures the path and decides the optimum pole positions and transitions to limit cross-talk, once the route is fixed and cleared. These are documented in field books which lines personnel use to plan the construction work.

This project is typical of large scale trunk works at the time which were undertaken by camping parties due to the difficulties of obtaining suitable accommodation in towns.  A typical camp would cover approximately 50 kilometres of the pole route and house approximately 40 men in tents. The paper provides details of the amenities in camp including water and electricity, reticulation, cooking and eating facilities, as well as drainage and waste disposal. 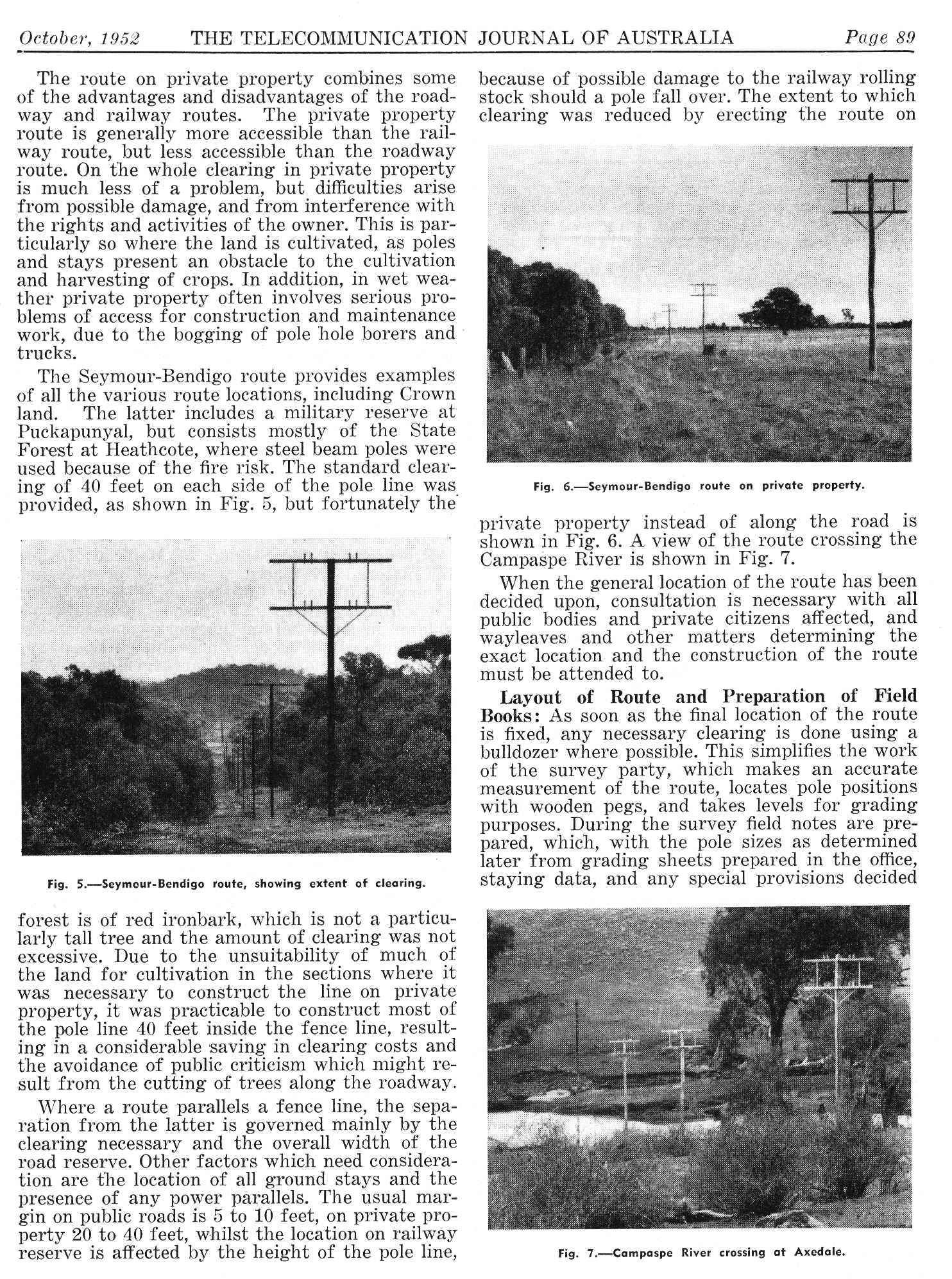 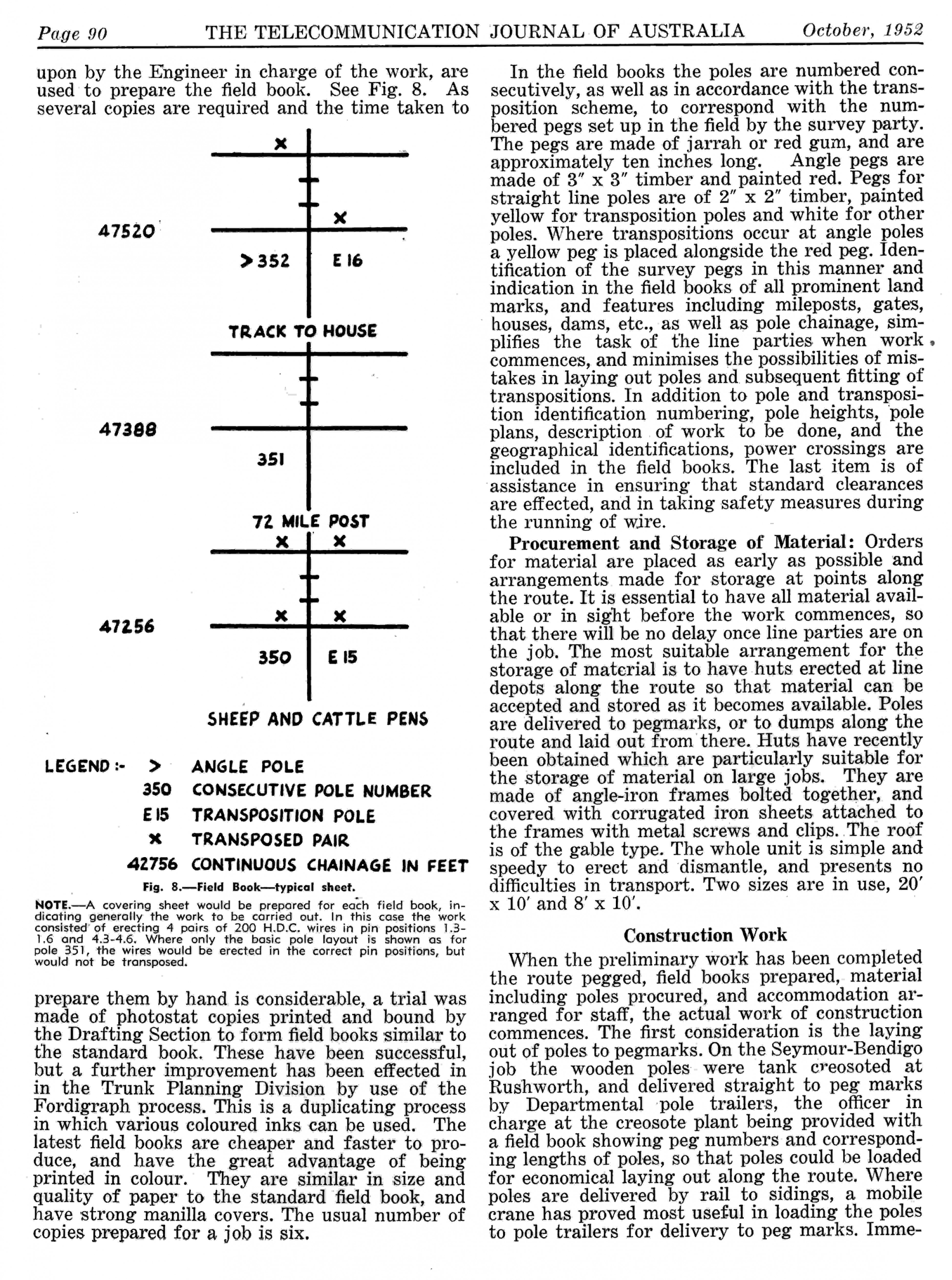 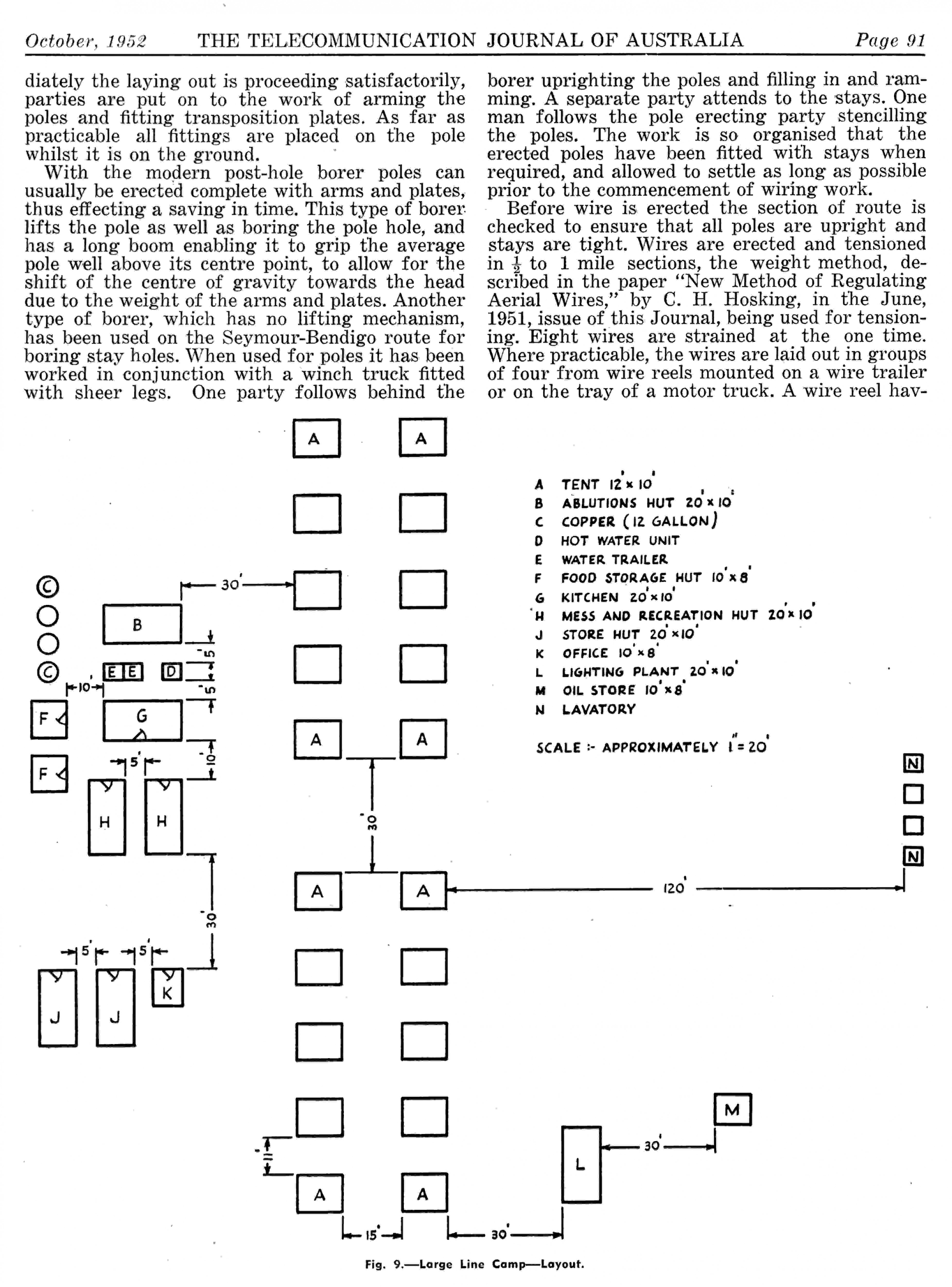 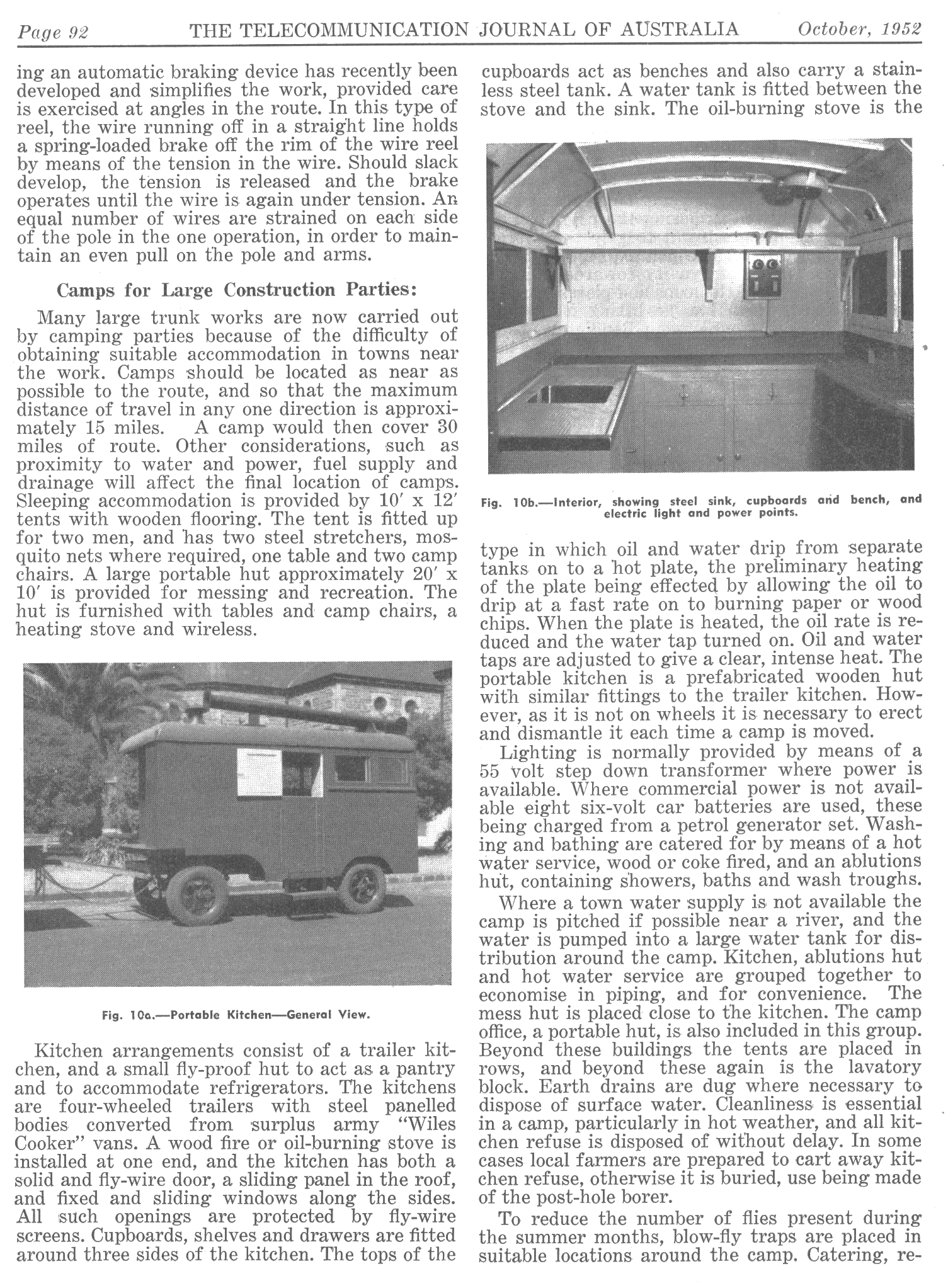 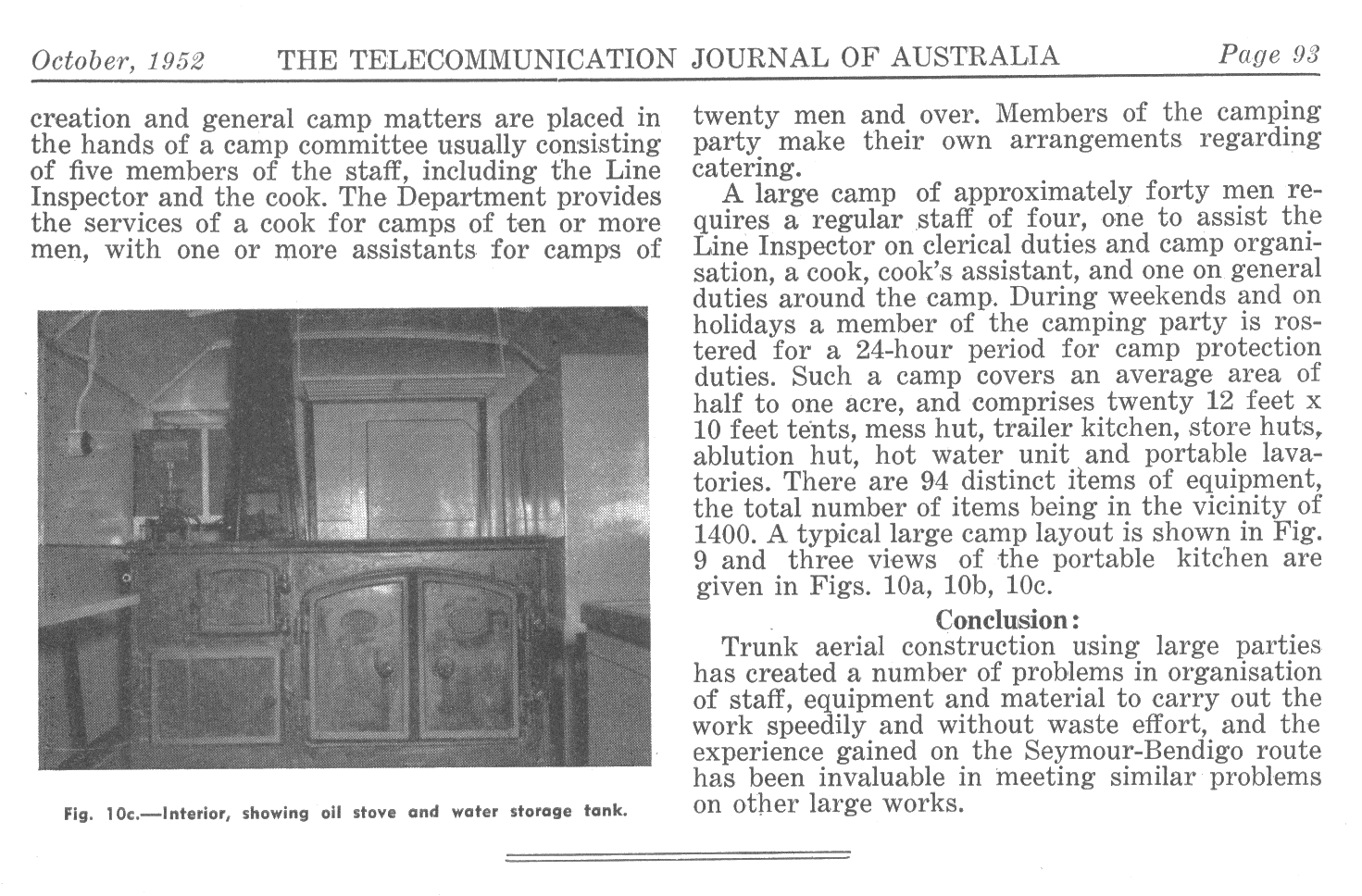