Two papers from 1963 describing the design and construction of the new aerial matrix switch at Radio Australia Shepparton and the ingenuity required to conceive and deploy a world-first solution.

The Radio Australia high frequency (shortwave) transmitting station at Shepparton, Victoria was completed in 1944.  The original aerial switching design allowed 3 transmitters to access 19 aerials in group configuration. The station relied on fixed bearing and fixed frequency directional aerials (usually curtain dipole arrays or rhombics) to skip high-frequency signals off the ionosphere to distant audiences in Japan, North America, South Africa and Europe. The selection of transmitter frequency and associated aerial was governed by the anticipated ionospheric propagation conditions and the need to provide reliable communications to the desired destination.

Fast forward to 1963 and the growth in Radio Australia services necessitated 10 transmitters having access to 35 aerials and one dummy load, which was unworkable with the original group configuration. Ideally a 10 by 36 aerial matrix switch was required to give full availability however none were available at that time with a rating of 100kW for each connection.

In typical Postmaster-General?s fashion, a specialist engineering team was established to solve the problem and included representatives from Radio Australia Shepparton, Lyndhurst Radio Station, Radio Section and the Workshops.

The historic papers (Cliff, 1963; Gemmell & Fullarton, 1963) describe the development of the switch from concept through prototype development, field trials and ultimately staged implementation. The electrical and mechanical engineering challenges were considerable. How do you connect a 100kW transmitter output, configured as a four-conductor open wire transmission line to any one of 35 aerials and dummy load, whilst minimising crosstalk and reflected power? How do you then control the matrix with a 24 hour, 7 days per week transmission schedule to ensure safety and reliability?

The switch had to be physically large and strong to accommodate the 36 transmission lines made from four-conductor, 600 lb per mile hard-drawn copper. The aerial terminating frame and switching frame were both semicircular, with a radius of approximately 15 and 8 metres respectively. The switching frame was approximately 7 metres high and had to be straight from end to end to within a few millimetres. Similar exacting tolerances were required on the switch arms, and a surveyor was engaged to layout the site precisely.

The switch arms were designed from the ground up by the project team. The transmission lines transitioned from an open four-conductor configuration through the hub into a balanced two conductor arrangement enclosed in the arms, then back to four-conductor again at the aerial terminating frame. The arms and connections needed to be rated for 100kW amplitude modulated transmissions as well as withstanding a VSWR of up to 5:1. A complex array of hoist and traverse motors were used to remotely control the arms from the transmitter hall.

The first stage of the switch connecting 10 transmitters to 9 aerials was completed in May 1961 and the final stage connecting to 35 aerials and dummy load was completed in September 1962. The outstanding success of the project highlighted the expertise of the personnel involved and the close cooperation between station staff, Radio Section and the Workshops Drafting teams.

The 1963 matrix switch was replaced progressively in 1991 with a Marconi matrix switch.  It comprised seven transmitter inputs and eleven aerial outputs and one dummy load, still in-situ today. At its inception, the Marconi switch had 11 field switches thereby doubling the available aerials to 22, plus a 500kW Brown Boveri dummy load. This allowed it to accommodate the aerials for Japanese, American/African, European/Continental and South East Asian transmissions, plus three rhombics and the dummy load.

In 1993, the old American/African, European/Continental and South East Asian aerials, as well as the American and European rhombics were removed. All but two of field switches were retained and relocated to provide connection to high and low band Japanese aerials. The American and Japanese rhombics were rebuilt and a new aerial array comprising five multiband TCI aerials was commissioned in 1993 to cover the Central and Western Pacific.

The ABC ended its shortwave transmission service to international audiences from 31 January 2017, in line with the national broadcaster?s commitment to dispense with outdated technology and to expand its digital content offerings. A Senate Committee inquiring into the possibility of restoring ABC shortwave services rejected the proposed legislation on 9 August 2017. (SWLing Post, 2017; Senate Report, 2017). The station at 490 Verney Road, Shepparton is owned by Broadcast Australia International and is currently up for sale according to the local paper and estate agents CBRE (White, 2017; CBRE, 2107).

I worked at Telecom Radio Section in the early 1980?s and the 1963 aerial switching matrix at Radio Australia Shepparton was showing signs of wear, given its unbroken service during the 20 or so intervening years. Doug Cliff was the manager of Radio Section at that time and he had a photograph of the switch on the wall behind his desk. Doug was a good manager and created a collegiate work environment in the office at Richmond, and at the depot at Box Hill. Doug was also an accomplished pianist and the Musical Director of the Whitehorse Musical Theatre company. Doug passed away in 1984 after a battle with prostate cancer and is fondly remembered by those who worked with him.

Senate Report. 2017.  - Australian Broadcasting Corporation Amendment (Restoring Shortwave Radio) Bill 2017 was referred to the Senate Environment and Communications Legislation Committee on 16 February 2017, the Senate for inquiry and report by 10 May 2017; found at: http://www.aph.gov.au/Parliamentary_Business/Committees/Senate/Environment_and_Communications/Shortwaveradio 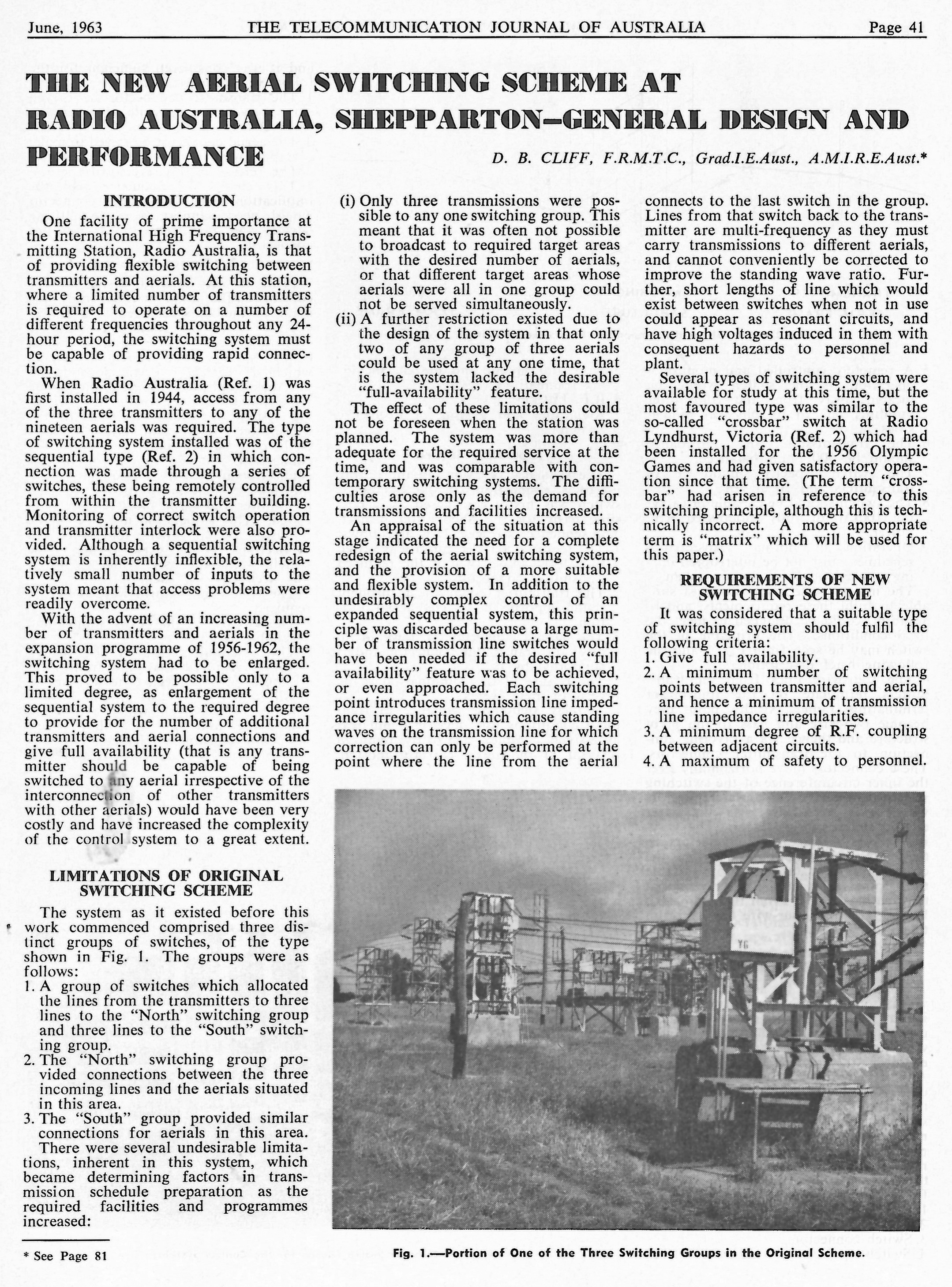 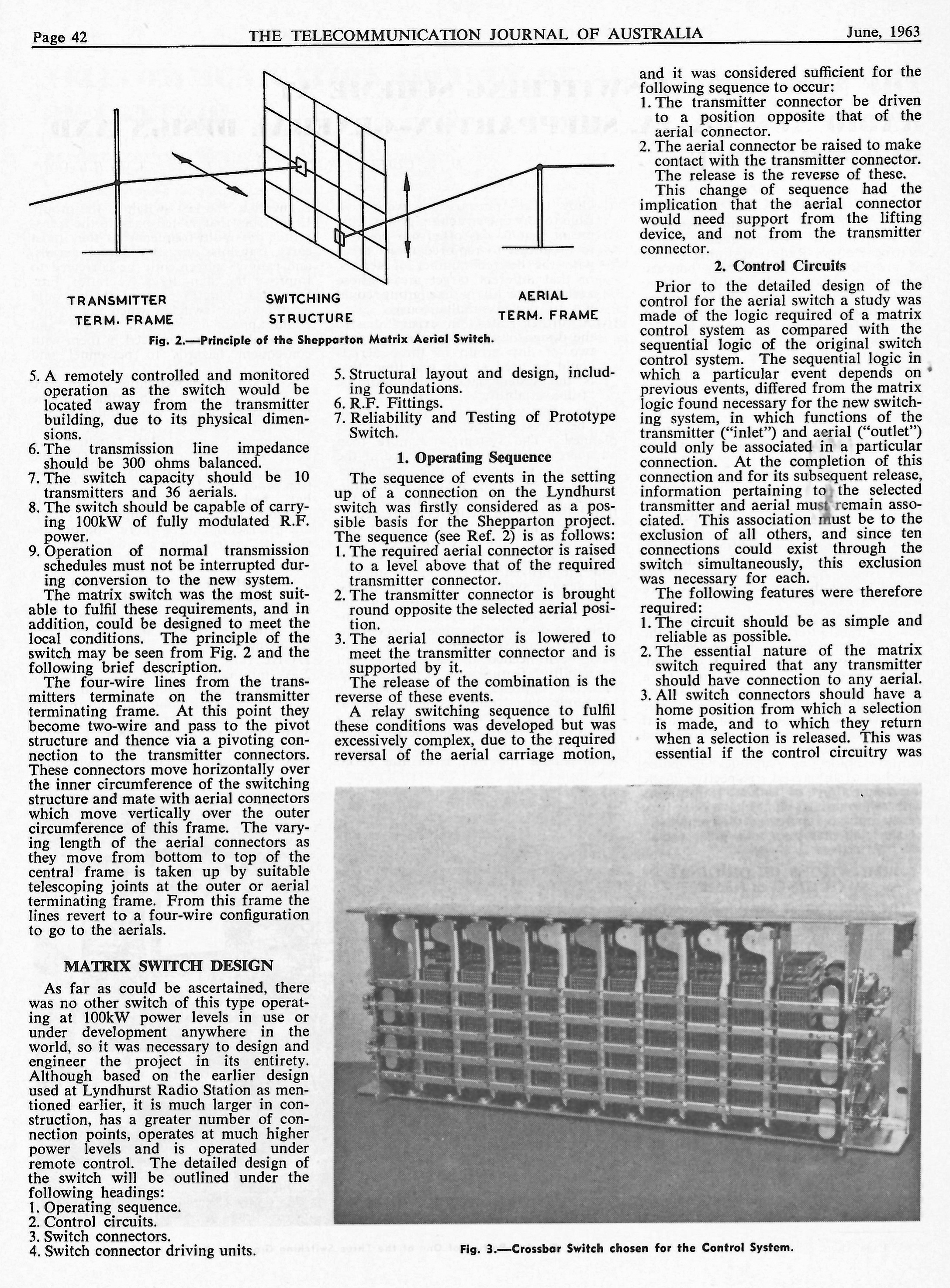 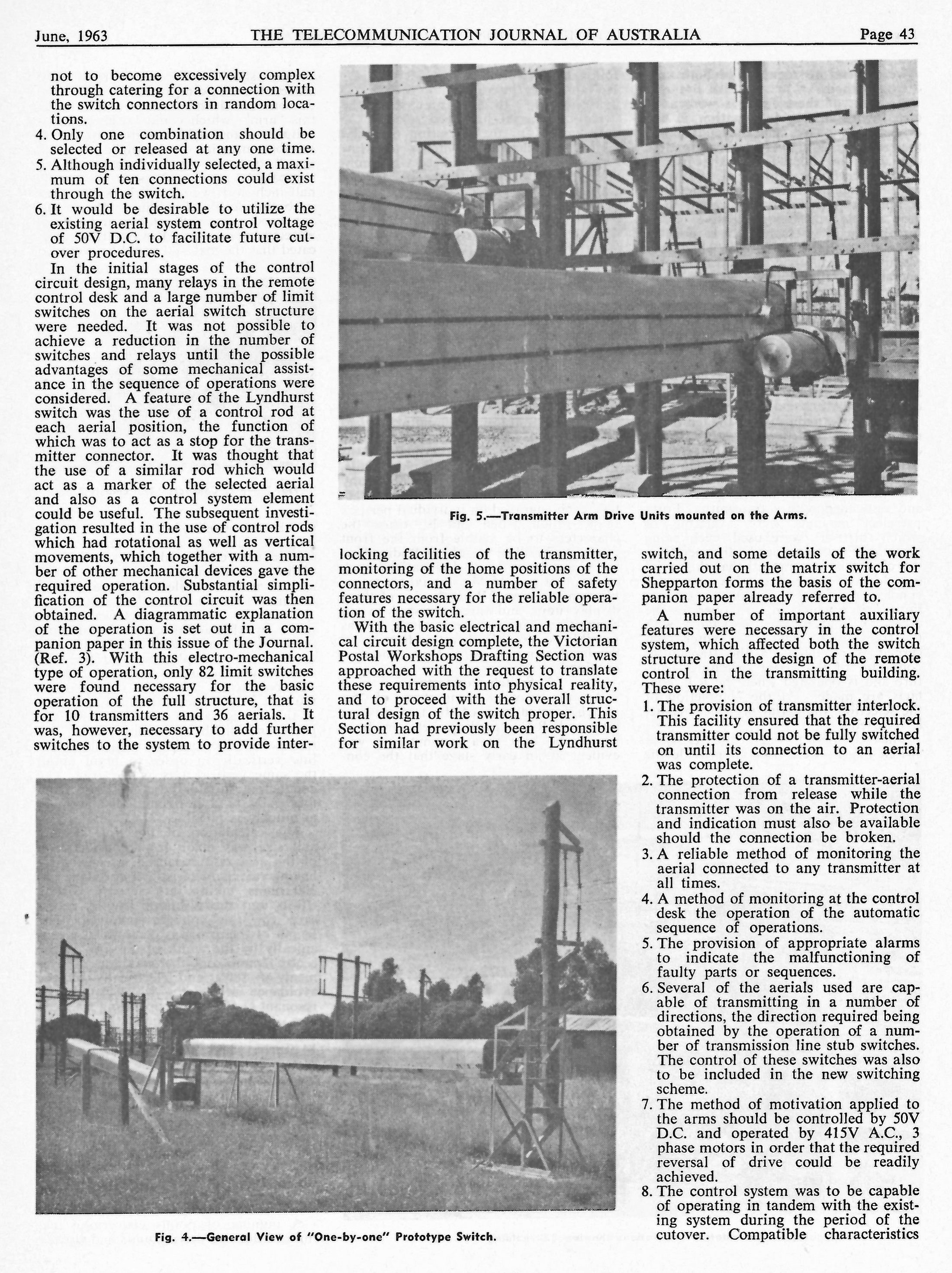 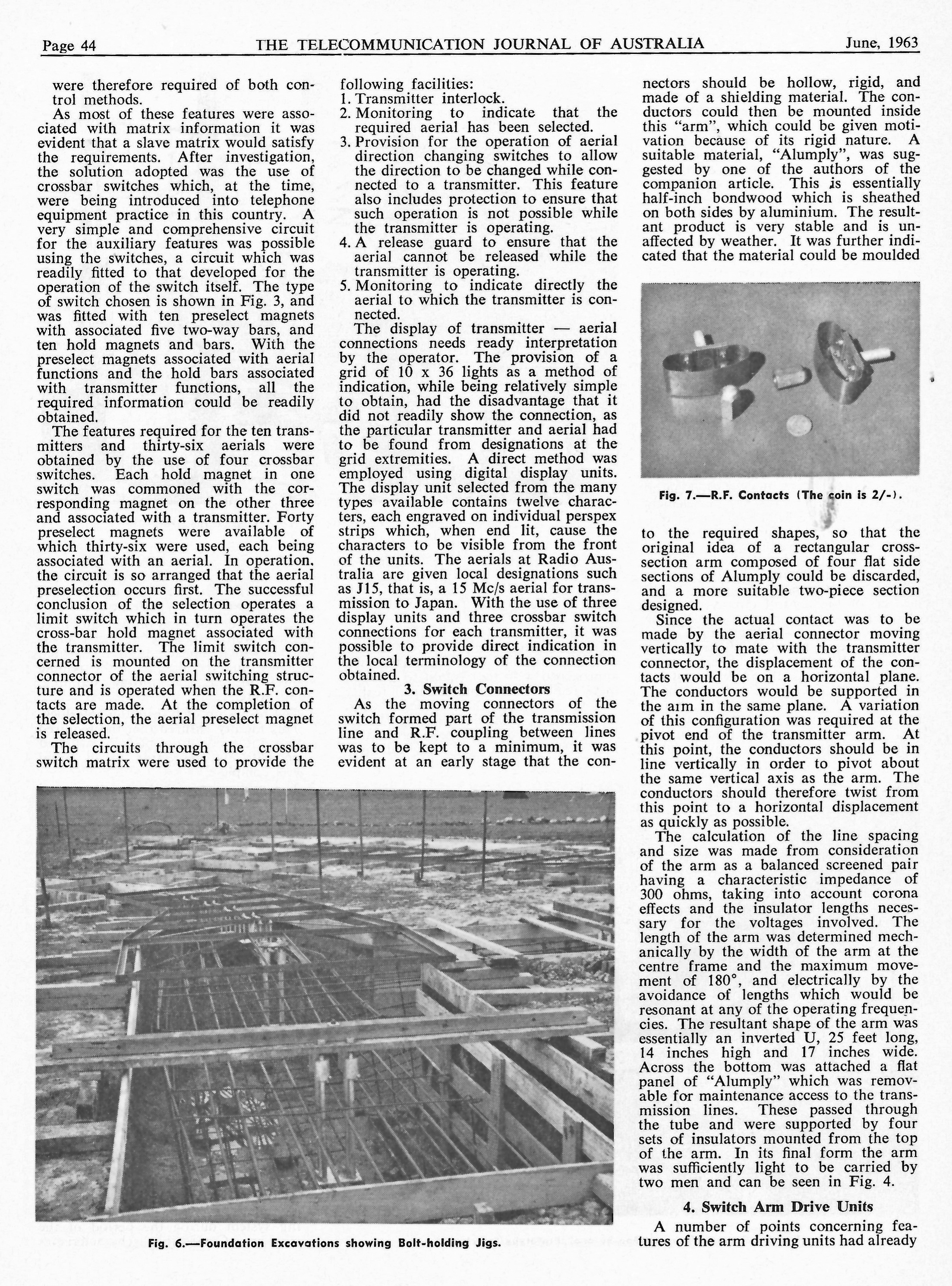 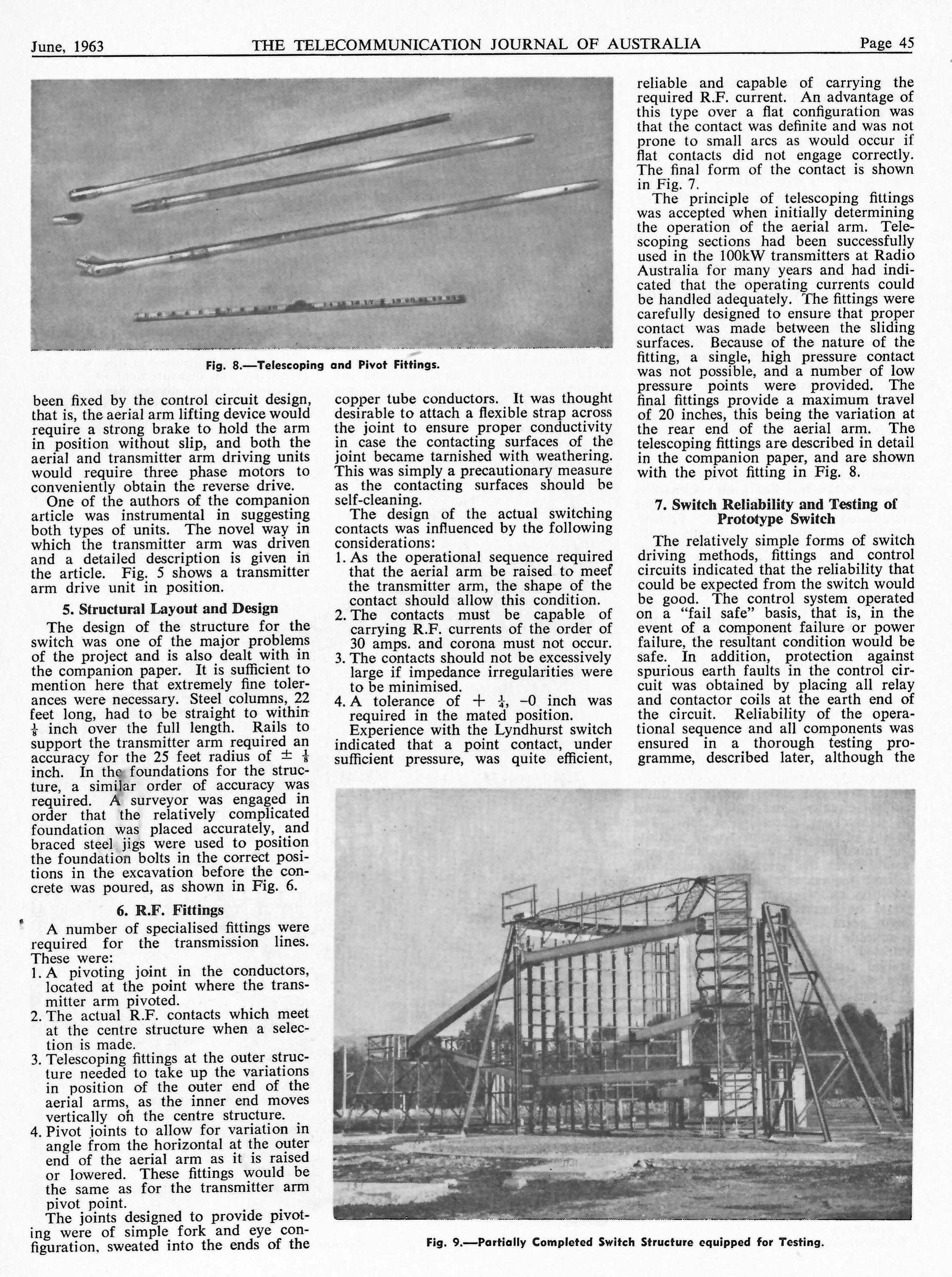 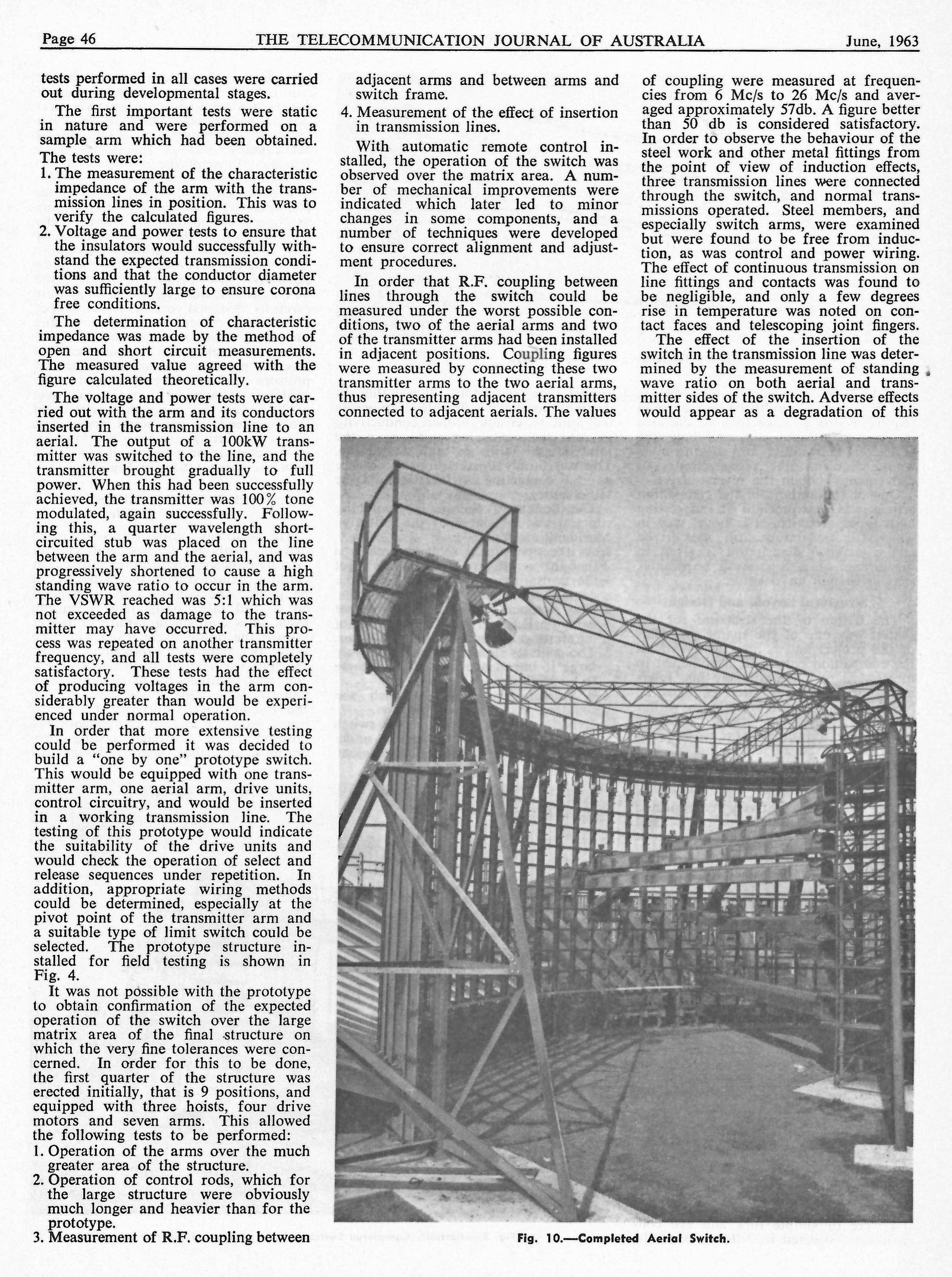 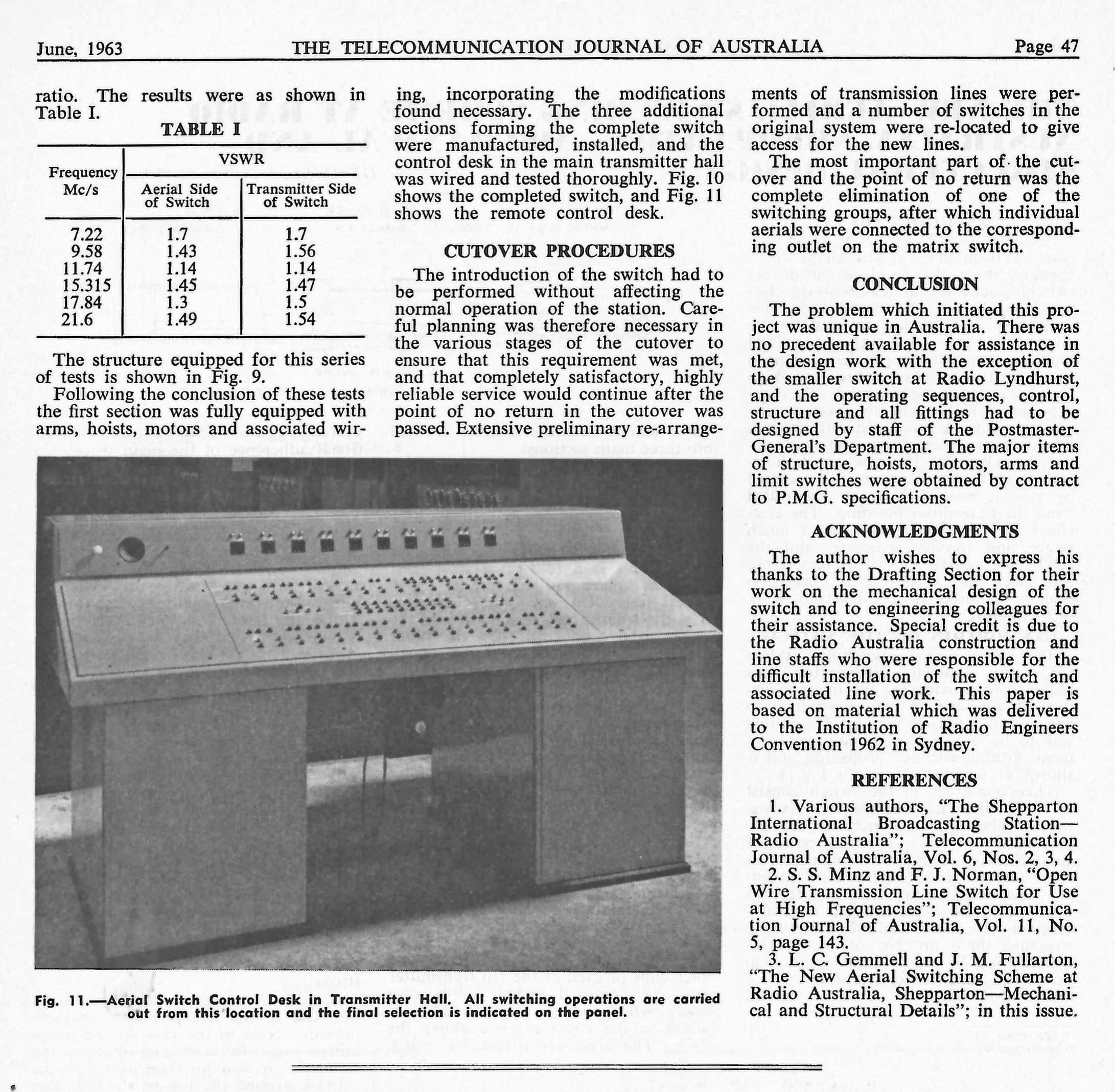 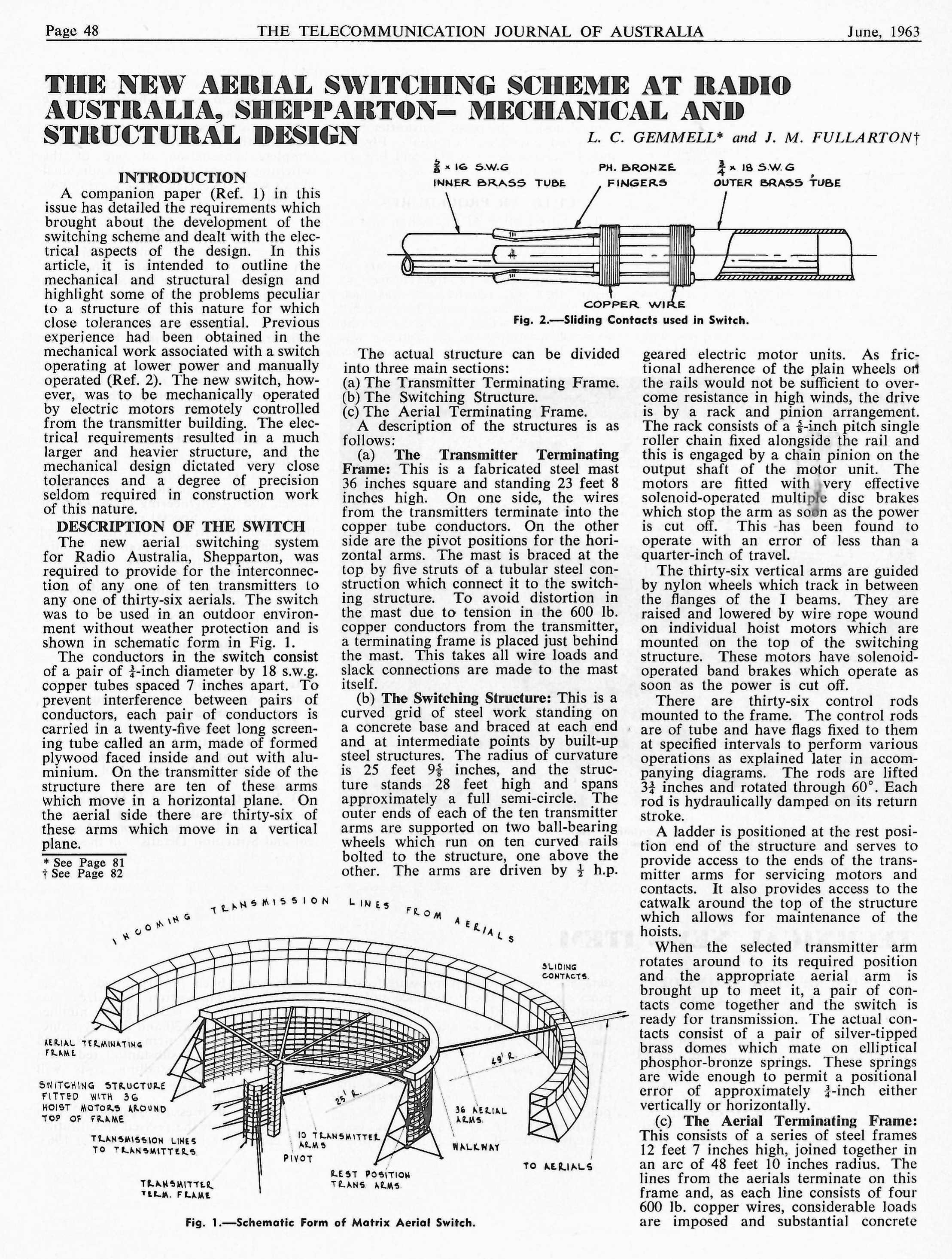 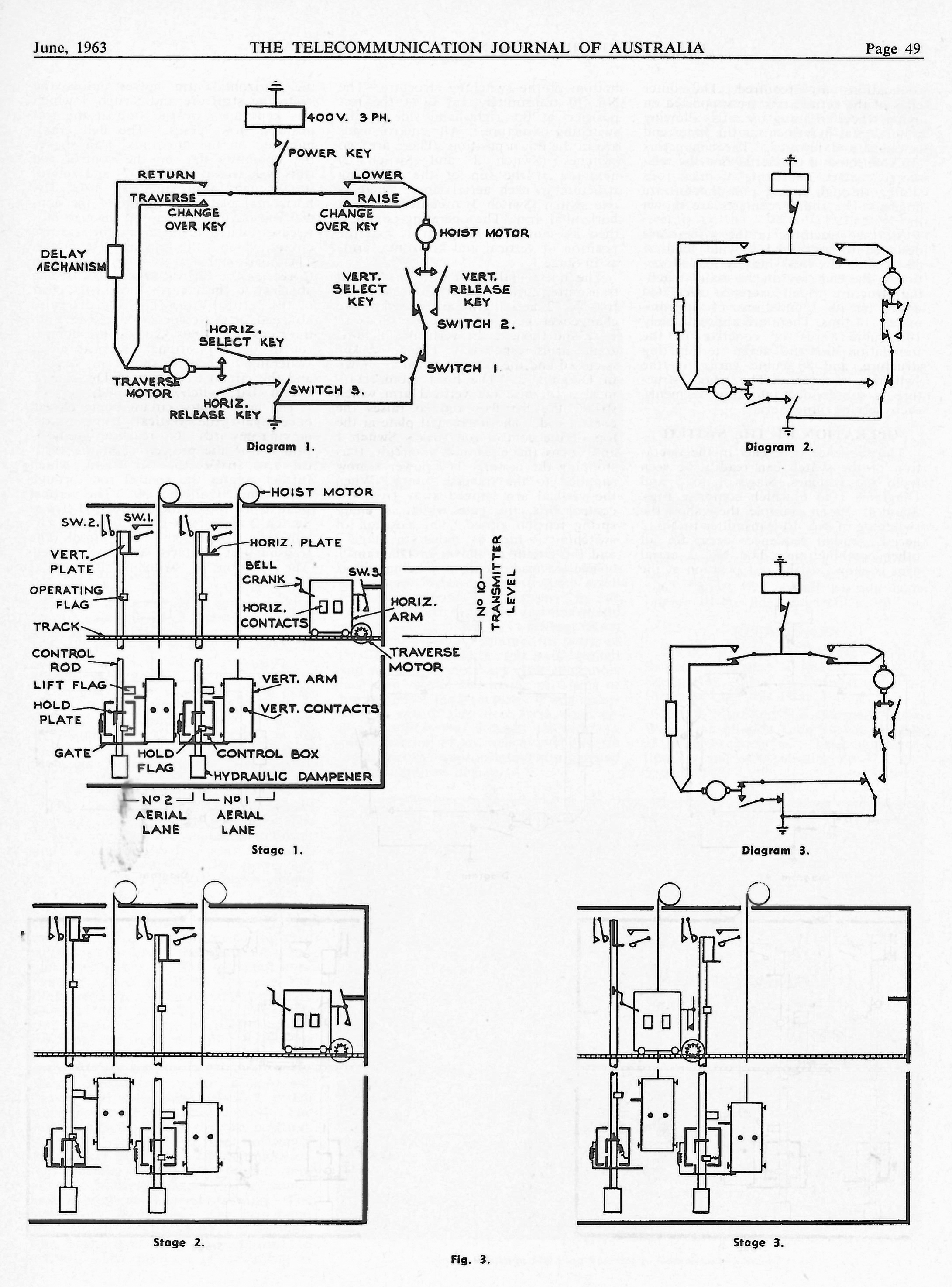 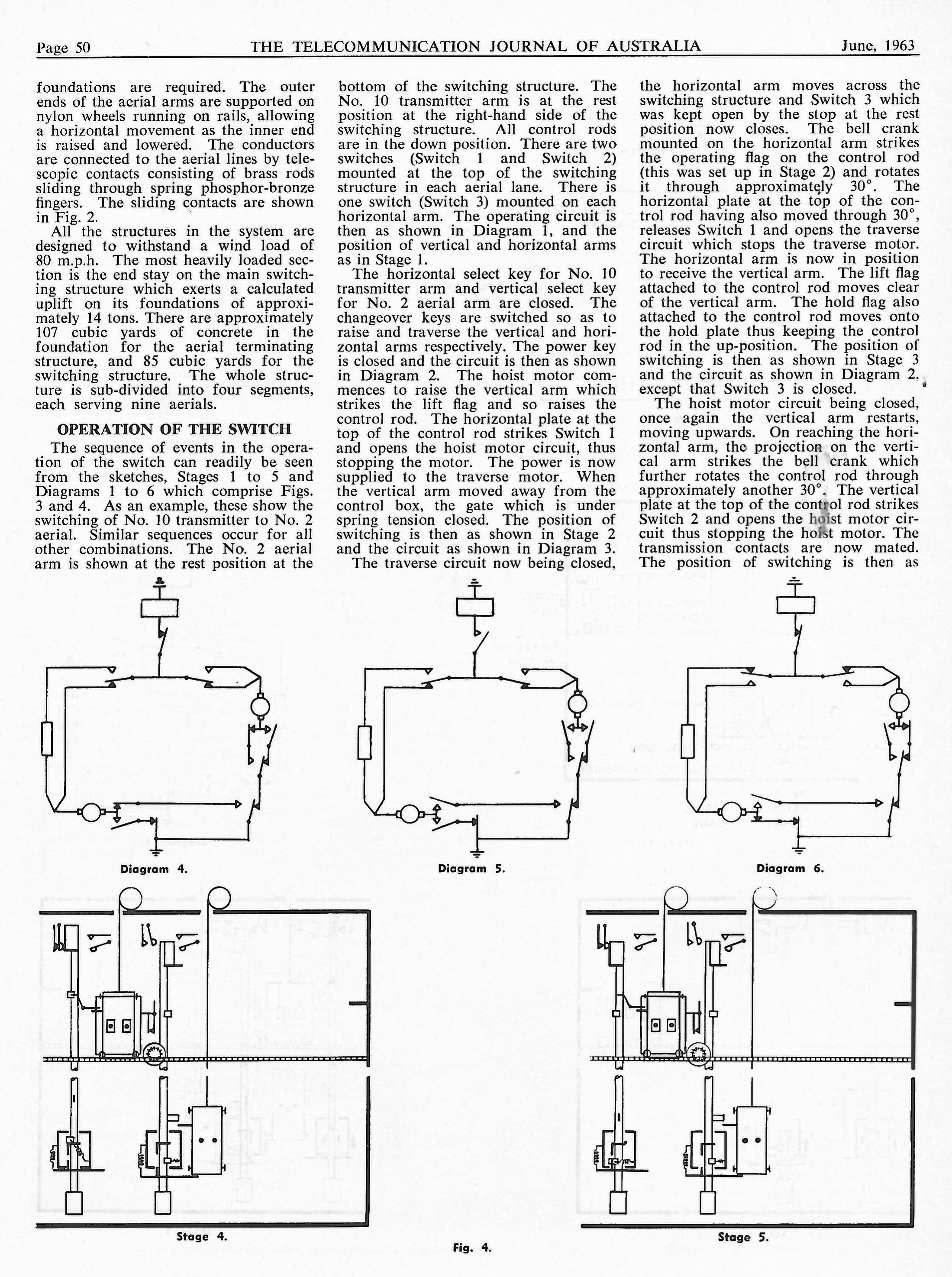 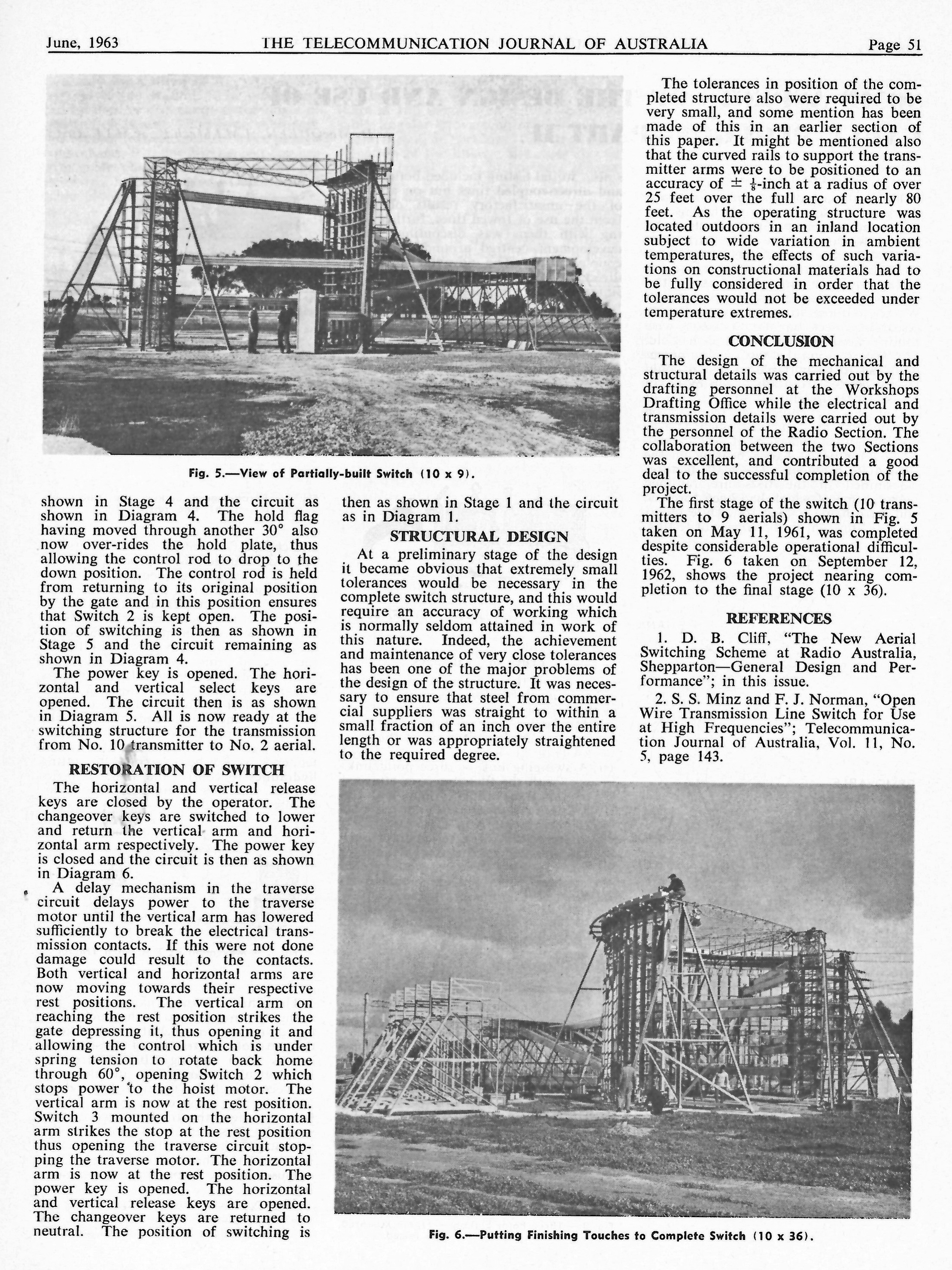 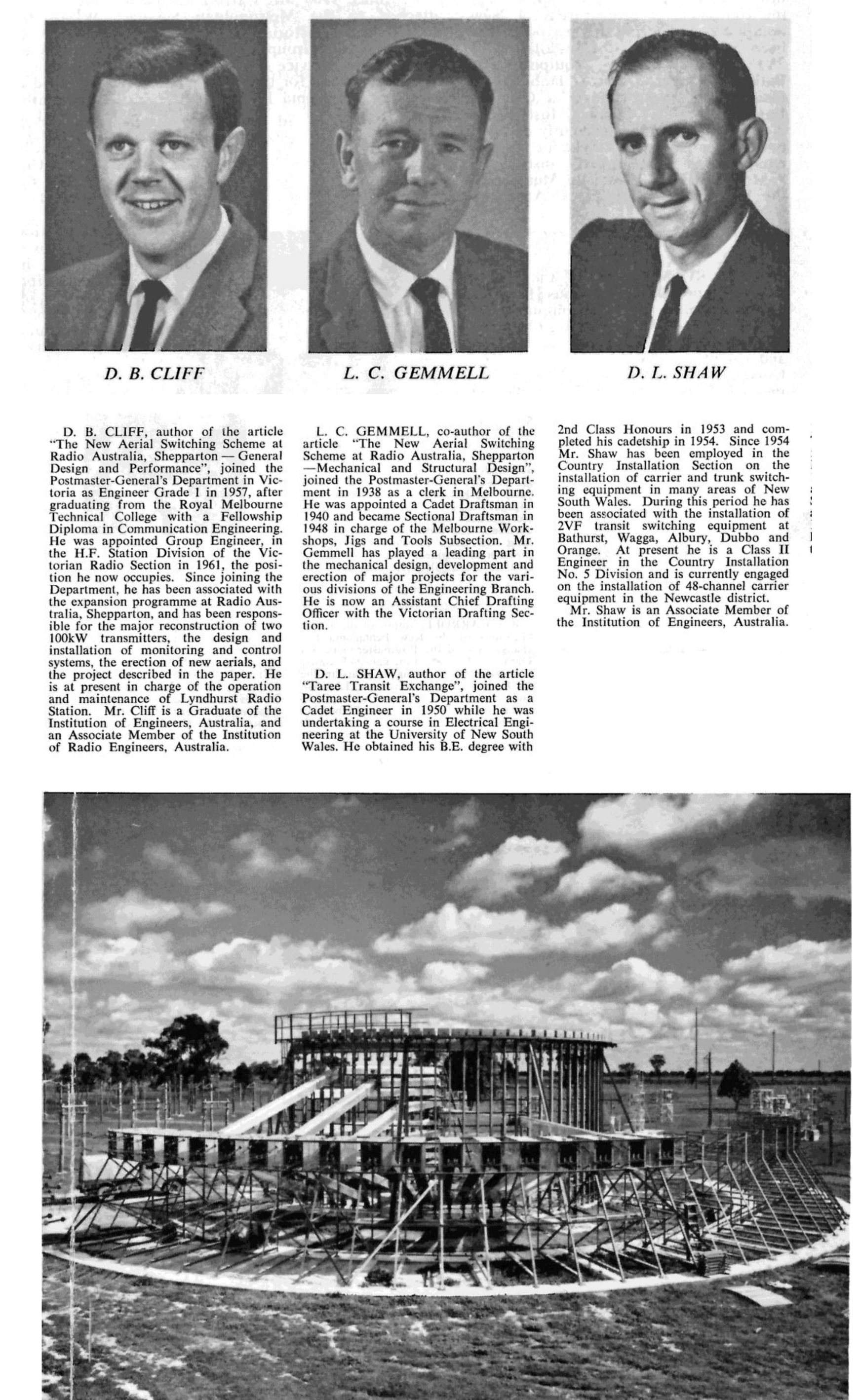