A comment by Australian Prime Minister Malcolm Turnbull on 23 October 2017 has re-awakened interest in the possibility that lay open in 2004 for the then Coalition government, of which Mr Turnbull was a member, to have preceded New Zealand in reaping the benefits of structural separation of the incumbent carrier. The paper ?Revisiting the Structural Separation of Telstra?, published in the Spring 2004 issue of the Telecommunications Journal of Australia and republished below, provided not just the policy rationale for structural separation, but also detailed how it could have been achieved.

A curious comment by Australian Prime Minister Malcolm Turnbull on 23 October 2017 has re-awakened interest in the possibility that lay open in 2004 for the then Australian Coalition government to have preceded New Zealand in reaping the benefits of structural separation of the incumbent carrier.  After all, the paper ?Revisiting the Structural Separation of Telstra?, published in the Spring 2004 issue of the Telecommunications Journal of Australia and republished below, provided not just the policy rationale for structural separation, but also spelled out in practical detail how it could be achieved.

Furthermore, this historical paper foreshadowed how a government-owned ?NetCo?, formed from Telstra?s fixed network wholesale business, would have been able to achieve all that the subsequent NBN Co (2009- ) was chartered to do, but with its costs wholly or largely cross-subsidised from NetCo?s wholesale business. With a conservatively estimated commencement year of 2007 for NetCo, this paper predicted NetCo would have had a good chance of rolling out a national high-speed broadband network by 2015 ? five years ahead of the most optimistic prediction for the completion of the current National Broadband Network (NBN).

On 23 October 2017, Mr Turnbull admitted it was a ?big mistake? to set up a new company to build the NBN, claiming that Labor left the Coalition ?a calamitous train wreck? (ABC Breaking News, 2017).

Mr Turnbull made this comment during an interview with the ABC, the morning after the ABC?s current affairs program Four Corners highlighted widespread user dissatisfaction with the NBN. Four Corners reported on an almost 160% increase in NBN complaints over the previous financial year and on how the rollout was creating a digital divide across Australia, with many households unable to access the higher Internet speeds they were paying for (ABC Breaking News, 2017).

In the same interview, Mr Turnbull went on to say that Australia should have followed New Zealand?s model.

"They [the New Zealand Government] basically ensured the incumbent telco, the Telstra equivalent, split its network operations away from its retail operations. And then that network company in effect became the NBN.

"The virtue of that was you actually had a business that knew what it was doing, that was up and running, that had 100 years of experience getting on with the job."

In a subsequent blog post, on the Independent Australia website, the author pointed out that it was Mr Turnbull?s party, the Liberal Party, that ensured that this far better solution would never happen.

?The Howard Government had this opportunity up until 2005, while it still owned 51 per cent of Telstra. All of the telecoms industry ? except for Telstra and its unions ? were calling for the structural separation of Telstra prior to its full privatisation. [?]

?Instead, the Howard Government ? of which Turnbull had been a member since 2004 ? opted to close down a Parliamentary inquiry into structural separation. Their overriding objective was to maximise the dollars they could earn in selling off the national carrier ? and they succeeded. [?]

?In 2007, the fully privatised Telstra declined to roll out an NBN, except on quasi-monopolistic terms with reduced price regulation. The incoming Rudd Government then had little choice but to set up a new company, NBN Co, to design and build the new wholesale network.? (Independent Australia, 2017)

In the aftermath of this controversy, Emeritus Professor Trevor Barr suggested to this Journal?s Editorial Board that it would be appropriate for the Journal to republish my 2004 paper, which you will find reproduced below, as part of the Journal?s History section.

It gives me considerable satisfaction to have had the policy recommendation I?d made in 2004 confirmed thirteen years later by such an unlikely source. 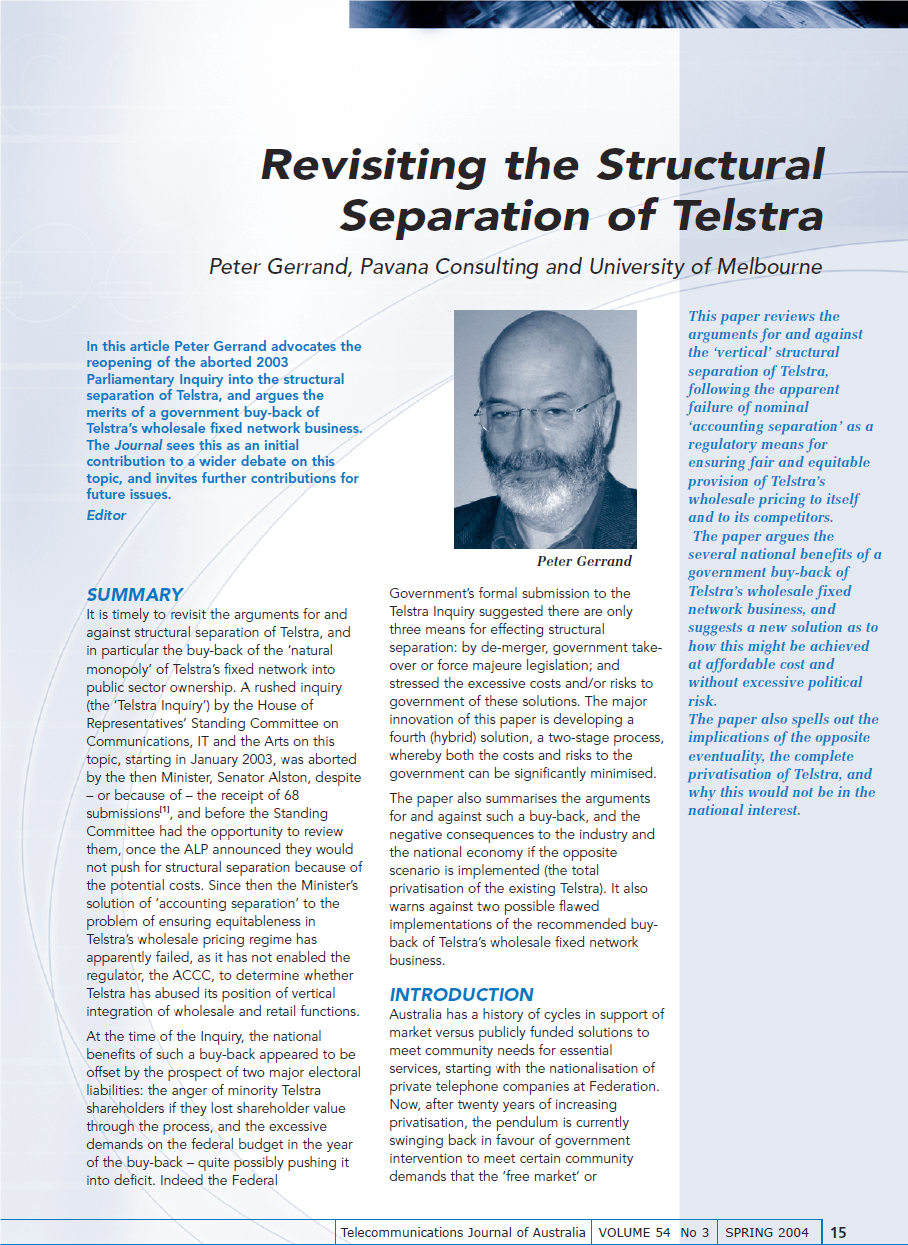 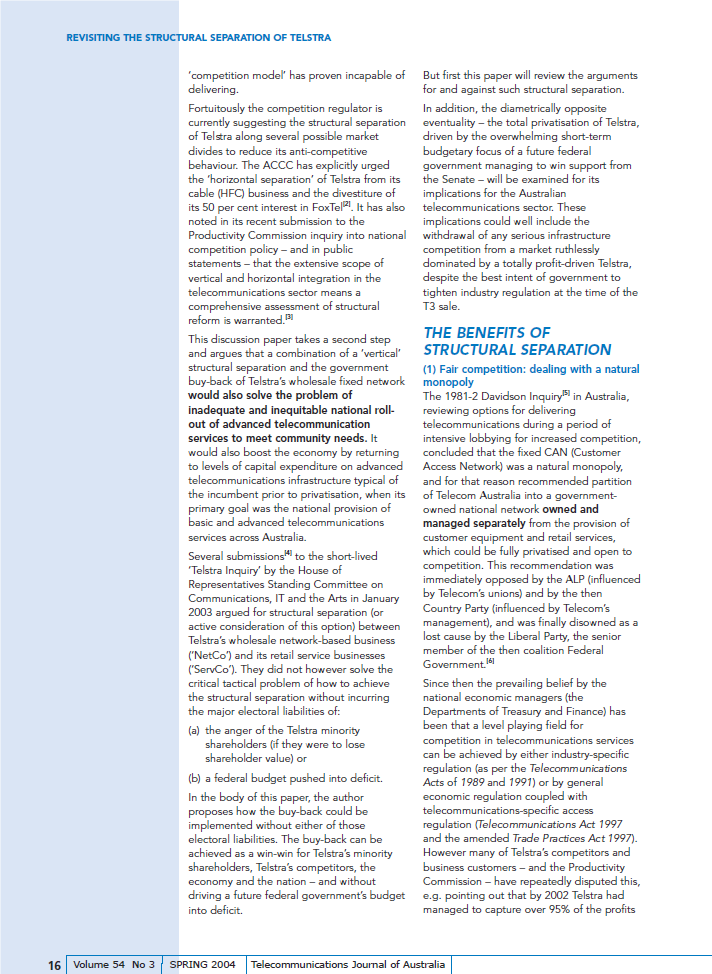 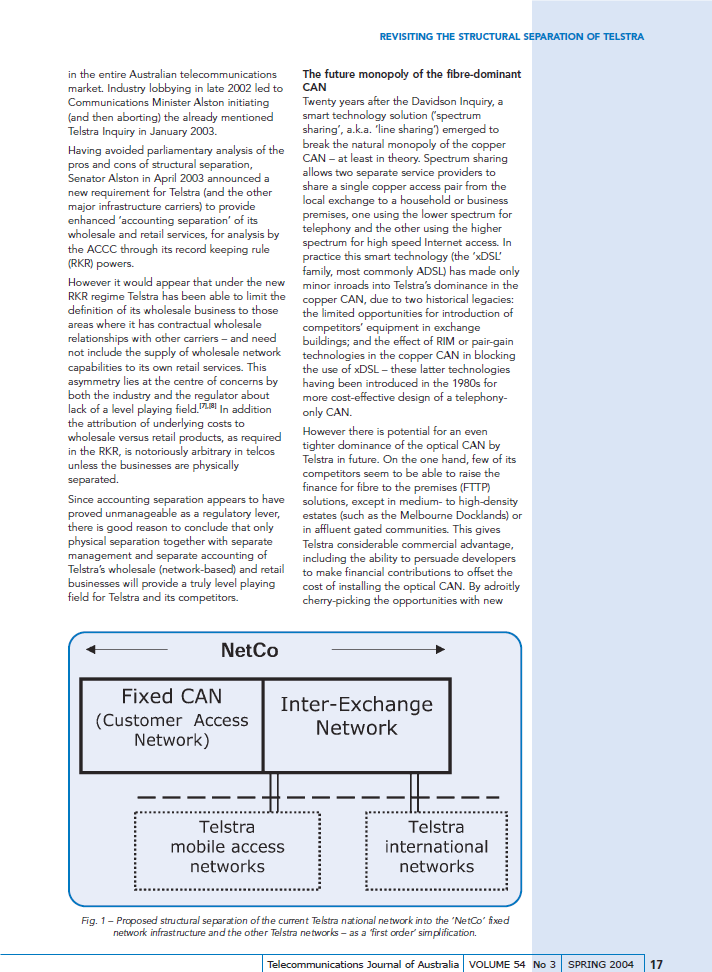 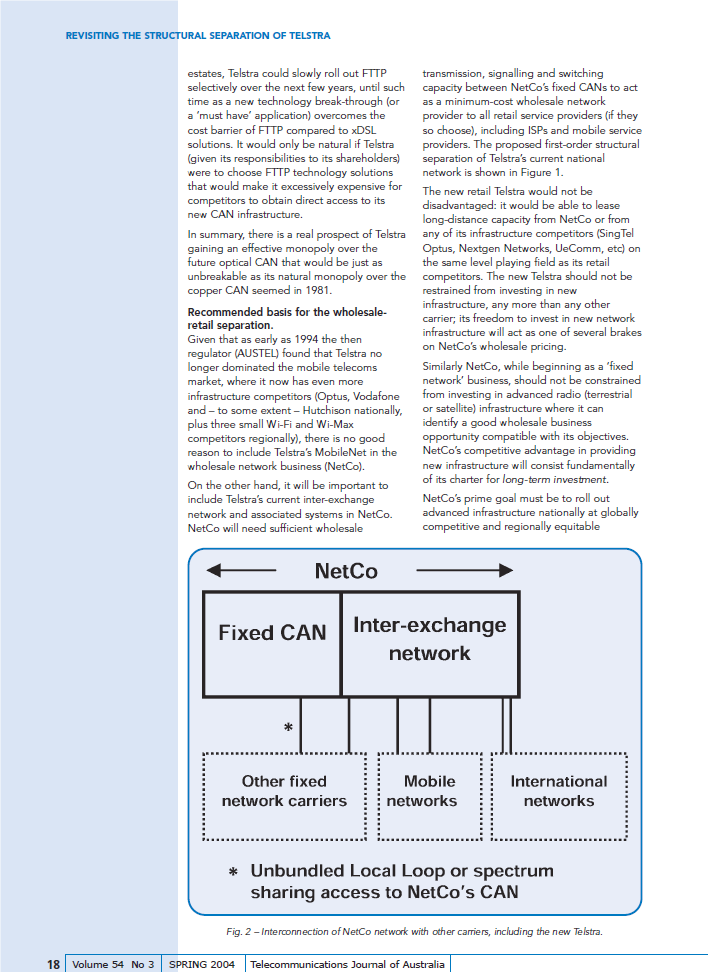 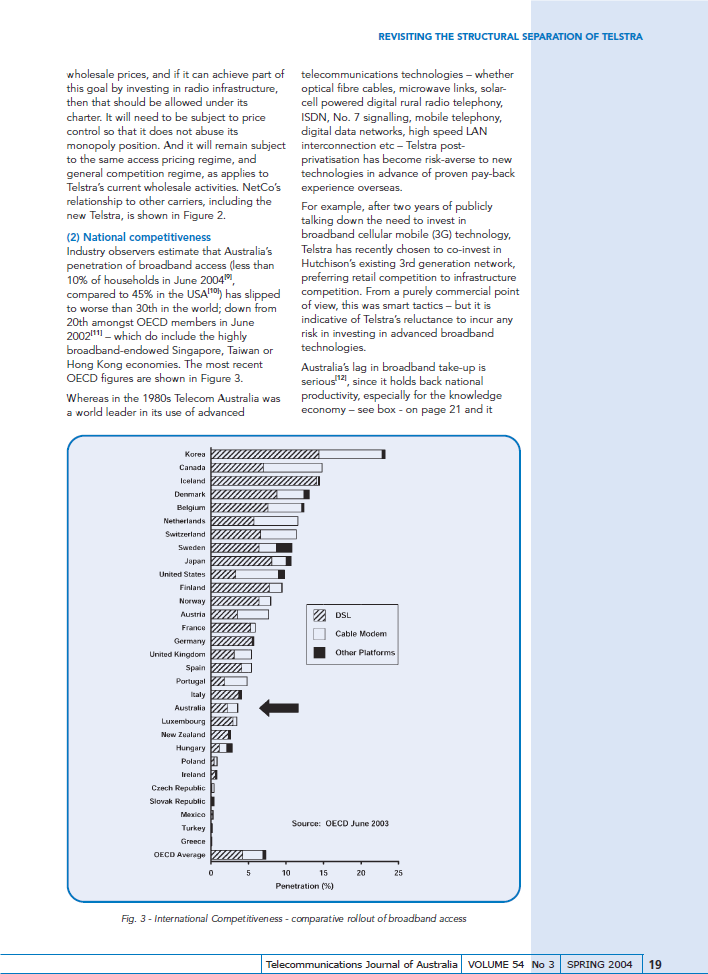 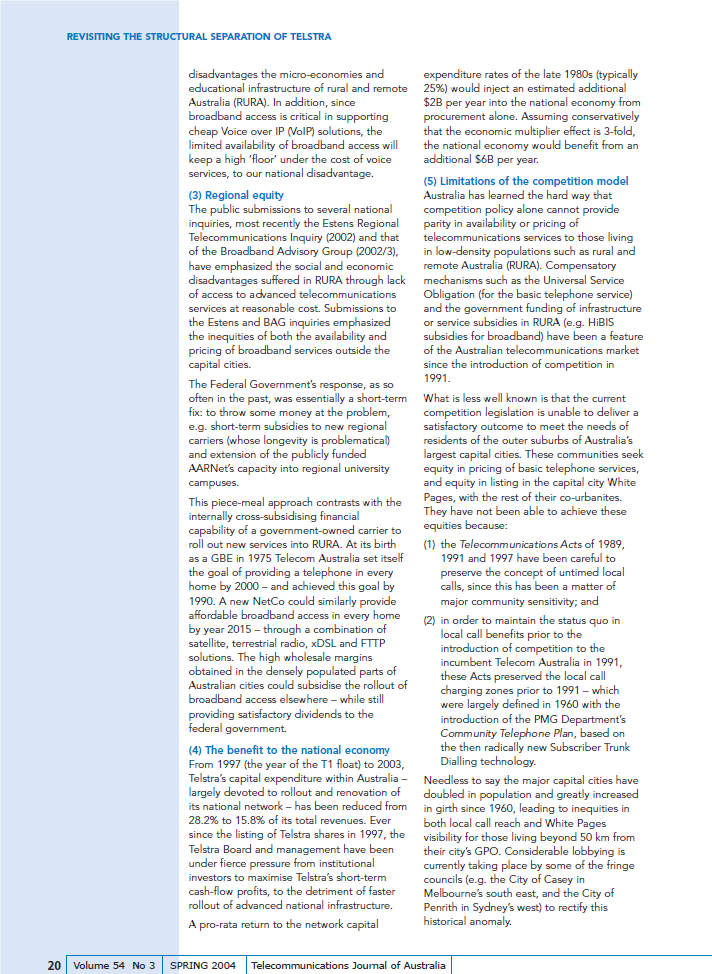 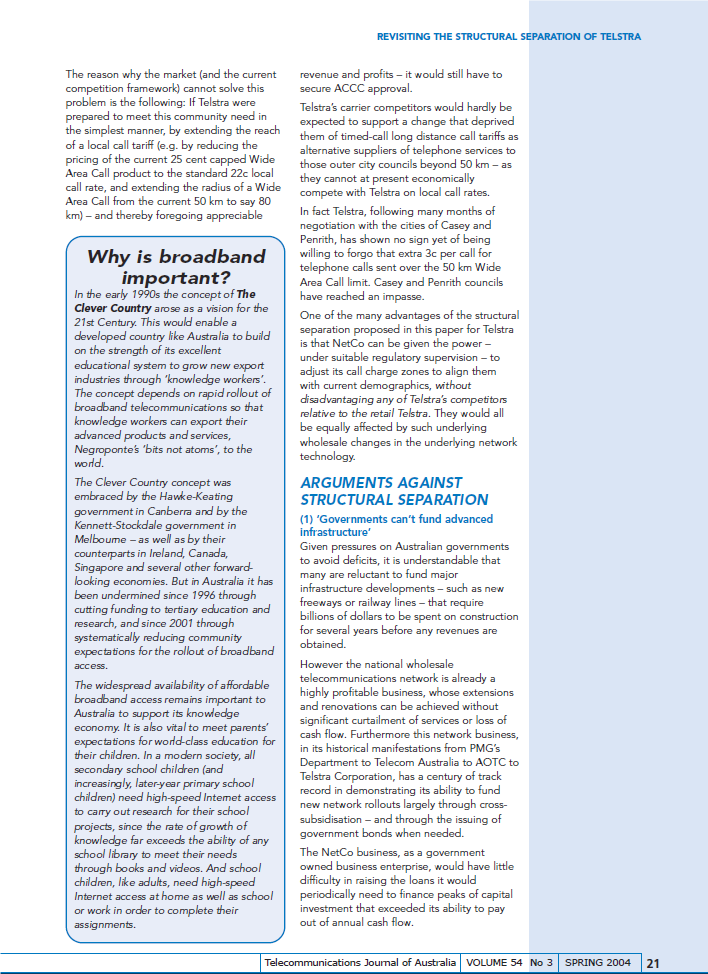 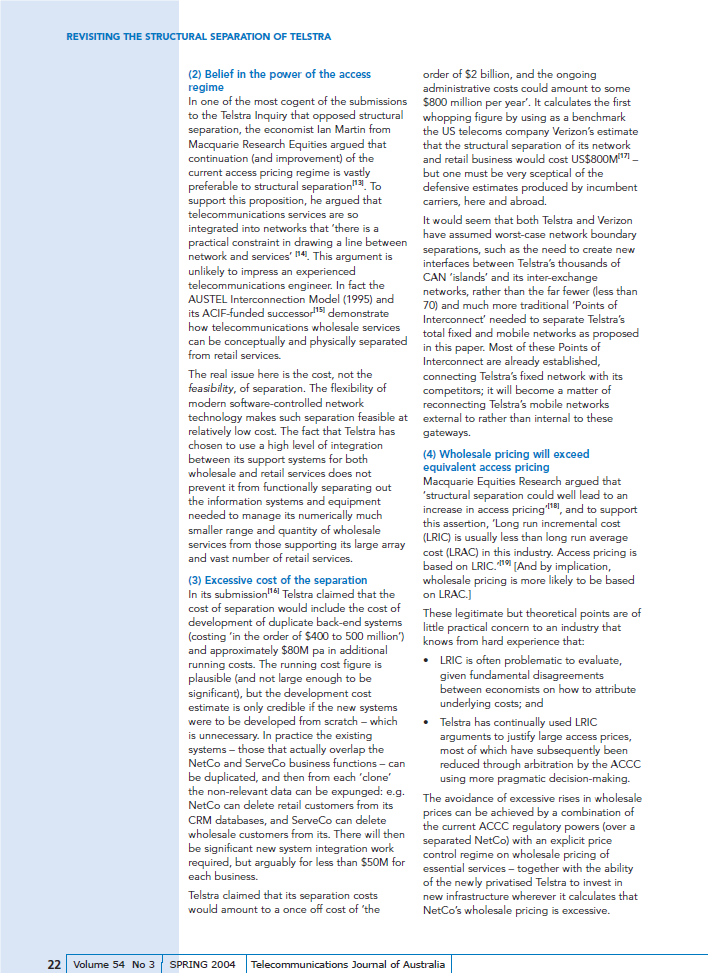 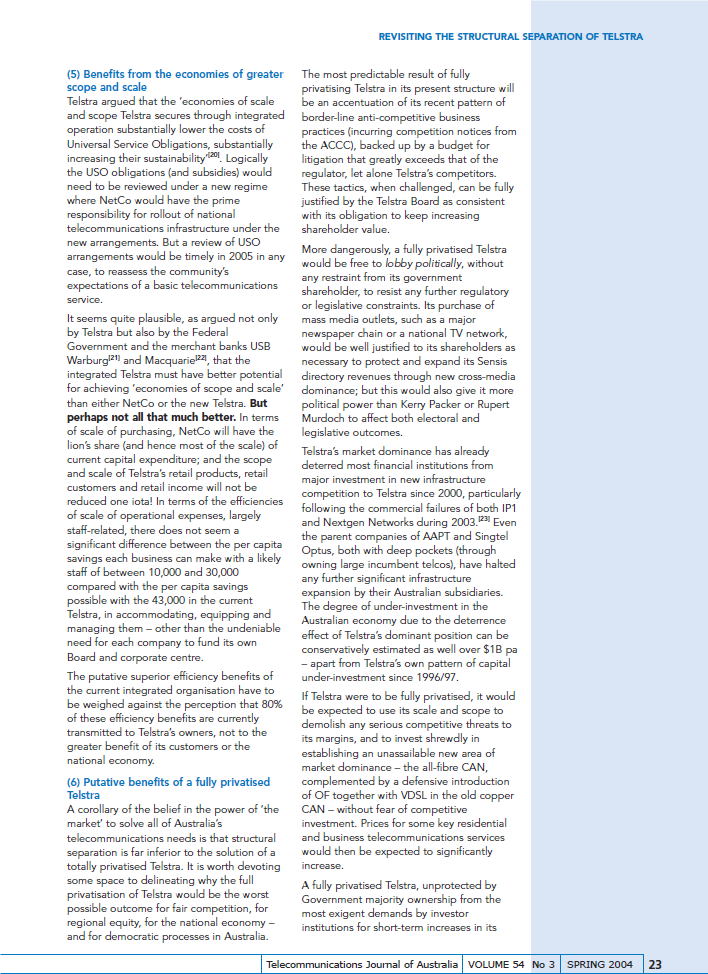 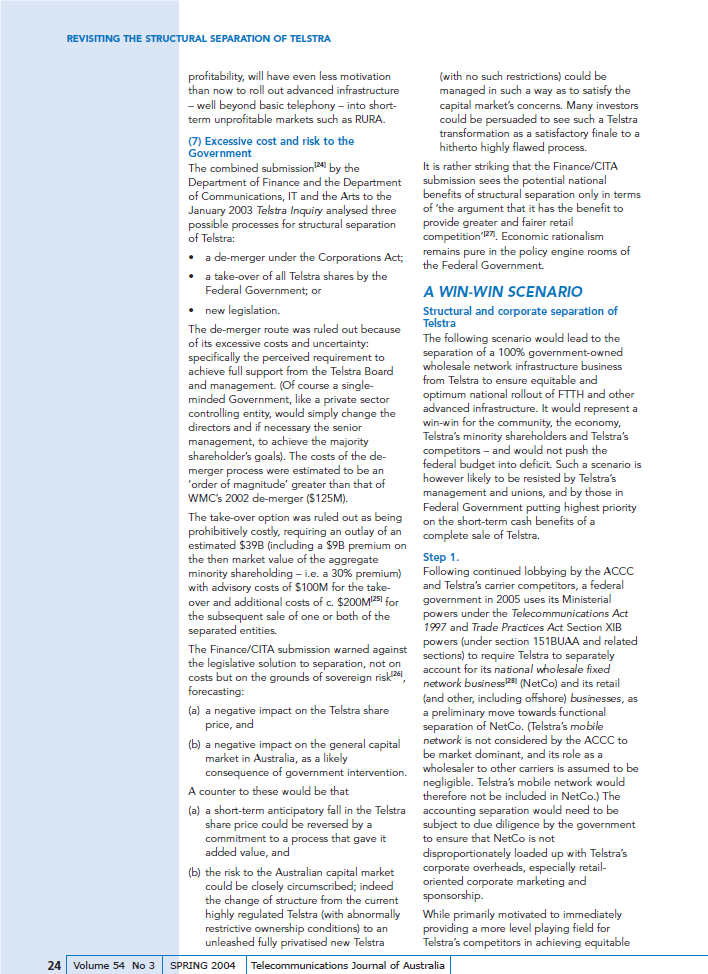 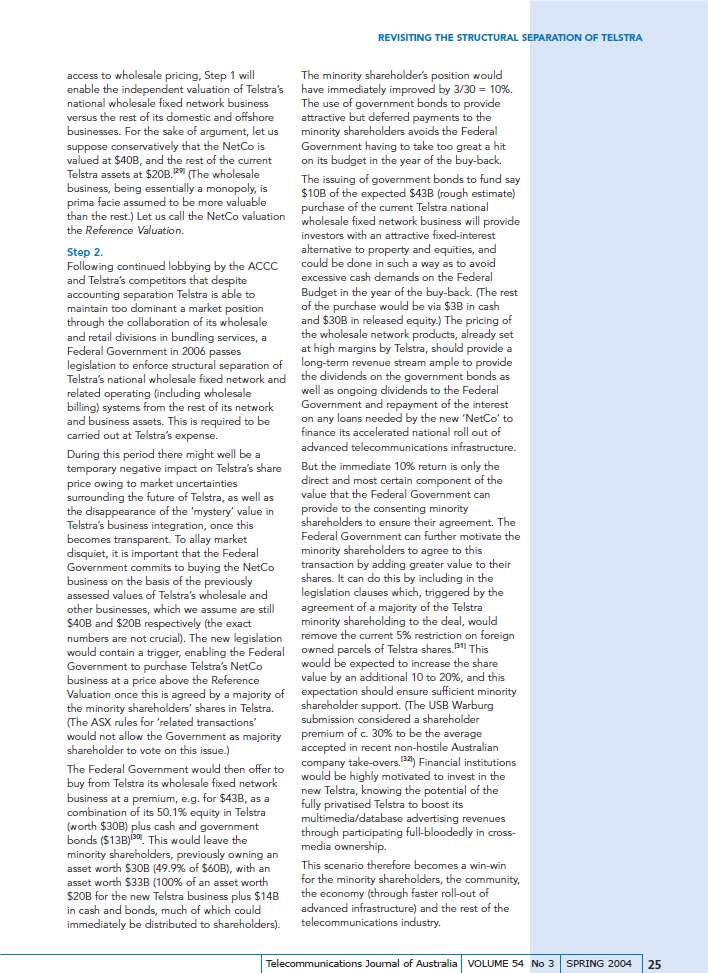 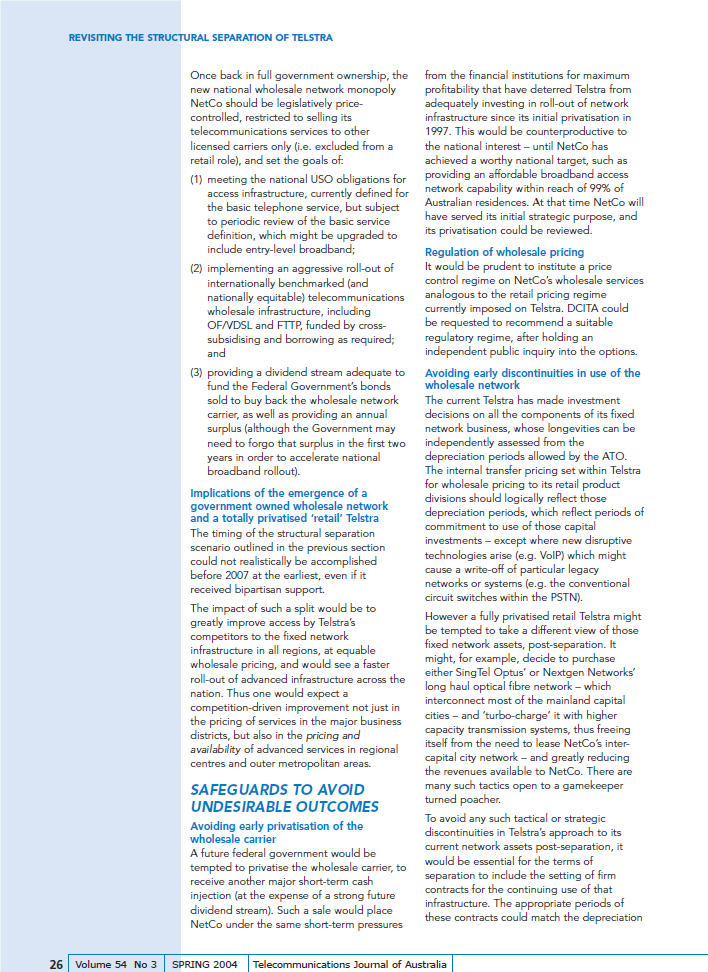 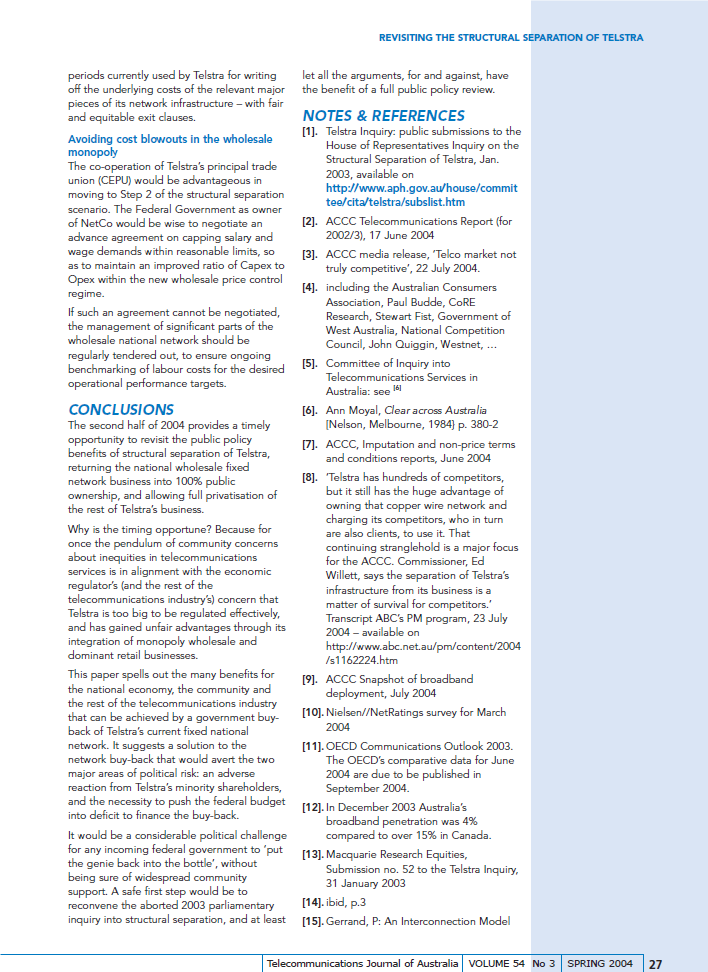 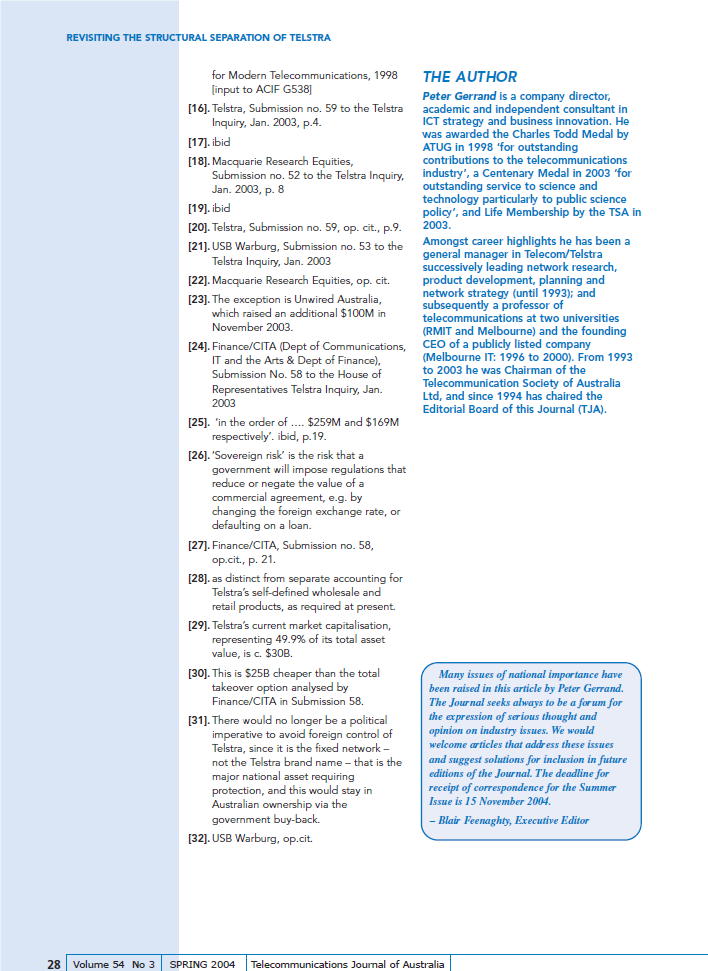