This paper provides results from a survey of broadband customers in Australia in November 2017. Respondents included both NBN customers and non-NBN broadband customers. The survey showed an increasing acceptance of mobile broadband, in line with other market trends, but identified significant dissatisfaction – one quarter of mobile broadband respondents and about one third of fixed broadband respondents – with current services. Factors that may affect a decision to switch from fixed to mobile broadband, or vice versa, included price, reliability, bundling of phone with broadband, and the capability of streaming video on demand. Negative perceptions of the NBN are also significant. Overall, we identify that about 30% of existing fixed broadband households would consider switching to a wireless broadband service. We also note the future rollout of 5G wireless service and the resultant market positioning of telcos, which may support further positive perceptions of wireless broadband.

Fixed to mobile broadband substitution may therefore threaten the viability of fixed networks by reducing the overall fixed customer base. This risk has been recognized in Australiaâs NBN Co (which is currently rolling out a fixed broadband access network to most Australian premises), where NBN Coâs chairman, Dr Ziggy Switkowski, has been quoted as saying âwireless broadband will be a legitimate alternative to fixed broadband in the 2020s for some applications â more than we may have assumed 5 years agoâ (Switkowski, 2017). The Australian Competition and Consumer Commission (ACCC) has also highlighted the potential of 5G to increase fixed to mobile and wireless substitution (ACCC, 2018a, chapter 6). More recently, Optus launched its 5G fixed wireless broadband service aiming for an initial 47 Fixed Wireless sites by March 2019 (Optus media release, 31 January 2019) and Telstra highlighted 5G fixed wireless broadband use cases in its 5G update (Telstra 5G Update, 5 December 2018).

To examine the issue of fixed to mobile broadband substitution in more detail, Venture Insights conducted an Australian consumer market survey to investigate the:

The survey was conducted online in November 2017 and was composed of a nationally representative sample of 1,446 broadband households. The survey data collection was co-funded by Venture Insights and the ACCC. In addition to questions about broadband connections (as described in the next section) and broadband usage, we also collected data on location (postcode), household size, household income, type of dwelling (house or apartment) and whether the premises were owned or rented.

In this group, 92 respondents â or 6.4% of the total survey sample â claimed to rely on mobile broadband (3G/4G) only. For these respondents, the key demographics were skewed towards (i) lower household income brackets, (ii) the rental market, (iii) regional locations, and (iv) living alone. In addition, 95% of these respondents indicated that their usage was less than 200 GB per month. These results suggest that price of broadband is an important consideration for these households, in addition to the convenience of wireless if moving house (rental market) and low data usage not justifying having both fixed and mobile broadband connections.

It is also worth noting that, of the total fixed broadband respondents (NBN and non-NBN), 50% estimated that their monthly data usage was less than 200 GB. This represents a large segment of the fixed market that could potentially be serviced by wireless solutions.

Figure 3 shows Venture Insightsâ market estimates of fixed broadband take-up in Australia since 2010. The estimates show a steady increase, especially over the past five years, to approximately 81% of households in 2017. When we add in the mobile-only broadband homes from the recent survey, the total household broadband take-up rate becomes 87.4%.

The popularity and growth of fixed broadband penetration is driven by several factors:

The above drivers for fixed broadband growth indicate a strong need for affordable and reliable broadband services which allow for growing data usage. Unlimited data allowances would provide peace of mind for broadband consumers, but note that, as indicated above, 50% of the total fixed broadband respondents (NBN and non-NBN) estimated their data usage at less than 200 GB per month.

We asked our survey respondents about their level of satisfaction with their current service and about their reasons for considering, or not considering, a change to an alternative broadband technology. The survey identified a number of factors, including perceptions of the National Broadband Network (NBN), that may influence consumer behaviour in choosing a broadband access service.

From Fixed to Mobile

Conversely, the key reasons for fixed broadband respondents not considering a switch to wireless (Figure 7) were:

The fixed broadband respondents who raised concerns about switching to NBN reflect a rise in customer complaints (in line with a rise in NBN connections) to the Telecommunications Industry Ombudsman (TIO) and the associated media coverage. Figure 8 shows that TIO complaints increased by more than eight times from 2014 to 2017 but have levelled off with marginally fewer complaints in 2018.

Figure 8. Consumer complaints about the NBN

As a result of the rise of consumer complaints, the Government asked the ACMA to look into the issues around the NBN. In August 2017, the ACMA began a program of work to gather information to better understand the type, incidence and cause of the problems consumers face when migrating to and using the NBN. A report on key findings was issued in December 2017 (ACMA, 2017a). In December 2017, the ACMA announced a suite of new telco rules (to be in place by 1 July 2018) aimed at improving the customer experience (ACMA, 2017b).

In addition, the ACCC has initiated the Measuring Broadband Australia (MBA) program which will source internet performance data from customers of retail service providers across Australia. The third report of the MBA program was issued in November 2018 (ACCC, 2018b). The MBA program will allow customers to compare broadband speeds delivered in peak and off-peak, which will enable customers to make better choices.

Interestingly, both survey groups â fixed broadband respondents who are interested in switching to mobile and those not interested in switching â raised the same (but opposite) reasons: wireless being cheaper vs fixed being cheaper; and wireless being more reliable vs fixed being more reliable. As a result, it is clear there are differing views on the benefits of mobile versus fixed broadband technologies: this will likely reflect the lack of uniformity in coverage and quality issues within both technologies and other factors such as types of internet usage and time of day.

Whilst this may ultimately mean customers may have to experience both technologies before being able to make an informed comparison, these differences, combined with a willingness to switch, indicate that new wireless broadband services will be able to gain market share from fixed services. Whilst we do not believe wireless will be a replacement for fixed broadband services, it is clear that specific customers segments are at risk.

The differing views on the benefits of mobile versus fixed broadband technologies also highlight:

From Mobile to Fixed

Of the current wireless broadband respondents, 75% indicated they were satisfied with their wireless broadband service (compared with 67% for fixed broadband respondents). The satisfaction rate reflects the growing use and acceptance by consumers of accessing the internet through devices such as smartphones. More than 80% of Australiaâs adult population now use smartphones, up from just under 65% four years ago â see Figure 9.

However, of the dissatisfied wireless broadband customers, the key reasons given were: (i) monthly costs; (ii) unreliability; and (iii) data allowance. In addition, 14% indicated they were considering cancelling their wireless service within 2 years (to switch to fixed) and 9% indicated they would consider switching to fixed when they were migrated to the NBN (or when the NBN becomes available). The key reasons (see Figure 11) for considering a switch to fixed were:

Conversely, the key reasons for not considering a switch to fixed were: (i) no need for fixed; (ii) portability; (iii) concerns with the NBN; and (iv) no fixed-line options available.

Similar to the fixed broadband respondentsâ reasons for switching/not switching, there are clearly differing views of the capabilities and experience of the two technologies. The actual trade-offs between fixed and wireless speeds and price points may in practice be different from the respondentsâ answers. However, the consumer view of wireless being a potentially better product for some respondents, combined with some negative perceptions of the NBN product (for both sets of respondents), will enable competitor fixed wireless and mobile only products to gain market share, especially if the negative perceptions of the NBN are not addressed.

With the planned rollout of 5G mobile networks across all mobile network operators in Australia, we can expect increased marketing and positioning of 5G services as providing an even better experience than 3G and 4G services across a range of factors â see Figure 12. 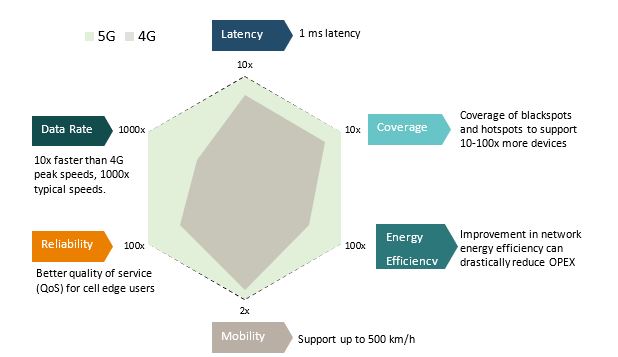 We expect that, over time, the difference in capacity between mobile and fixed Internet will diminish, making mobile a more viable universal Internet access solution for many users. Thus, whilst 5G will initially continue to complement fixed broadband, over time it may erode fixed broadband market share. This, of course, will depend on the operatorsâ design of the 5G network (small cell sizes, spectrum availability etc.) and the usage requirements of customer segments (for example, a large family actively using a range of internet services and applications versus low usage individuals or households).

In addition, Vodafone and Telstra provide options to include a wireless SIM in their fixed broadband WiFi routers â allowing users to switch between wireless and fixed to ensure reliable connectivity. As such, as network technologies improve, these operators could opt to switch low-usage customers to wireless only without changing the hardware or causing any disruption to users.

Finally, Fixed Wireless players, such as Uniti Wireless, Spirit, BigAir and Nuskope, have emerged to provide wireless broadband services (many aiming to capture both consumer and business broadband market share from NBN in particular regions).

There is clear potential for growing wireless-only household broadband services. Our survey results, identifying the growing acceptance of wireless services combined with some doubts about NBN service quality, indicate 30% of existing fixed broadband households would consider switching to a wireless broadband service.

However, there are differing views on the benefits of mobile versus fixed broadband technologies. This will likely reflect the lack of uniformity in coverage and quality issues across both service types, as well as other factors such as types of internet usage and time of day. The results of the ACMA NBN review and the ACCC performance monitoring program are likely to help consumers make more informed decisions.

In addition, the differing views on the benefits of mobile versus fixed broadband technologies highlight the opportunity for telcos to further communicate their service capabilities. Further, and most significantly, the NBN must continue to focus on resolving its perceived quality issues, while also ensuring a competitive product roadmap is in place for future broadband products.

The author would like to thank Dr Leith Campbell (Honorary Fellow, Melbourne School of Engineering) for his advice on this article.