Another great wonder of the world? Early experience with high speed broadband

TJA has invited a number of experts to contribute papers on early experiences with high-speed broadband, as the major theme for TJA's February 2013 edition. This guest editorial provides the motivation for the theme, and an overview of the eight papers selected on this theme.

Motivated by various mixes of government policy, sectoral needs and consumer demand, major implementations of high speed broadband infrastructures are steaming ahead across the world right now. They are driven by sometimes quite different national approaches but generally have similar objectives and a rapidly growing arsenal of powerful and cost-effective applications.

In earlier, more ?supply oriented? days of broadband, national policy development was stimulated, amongst many other considerations, by competitive pressures from OECD broadband penetration rankings, particularly motivating some embarrassed member countries in the lower range of the list. Whilst this competitive pressure remains alive, broadband activation has since turned more to demand mode, driven by the growing need for cost-effective competitive or personal applications across virtually all sectors of society. The demand side has been further fuelled by impressive technology advances and a growing and diverse range of new and emerging applications, including those considered in this issue of the TJA. Whilst economic analysis is clearly desirable, the key focus of this issue is the overall social benefit, whether measurable, anecdotal or otherwise, of early experience with high speed broadband applications, as seen by our authors.

Depending on the choice of implementation policy, high speed broadband infrastructure comes at significant cost, but with the expectation of much greater benefits. Reflecting on some of the early great infrastructural wonders of the world, it is unlikely that these projects could ever have been justified if modern cost benefit analyses had been carried out for them. Whilst such early infrastructures or facilities tended to be visionary and unrestrained, a relatively non-financial cost-benefit approach appears to have been adopted for them in most cases. By contrast, in today?s resource constrained world there is now substantially greater cost scrutiny of contemporary projects, and at the same time arguably less scope in them for vision, future uncertainty and other intangibles.

However in various ways the world is very much richer for the Great Wall of China, the Great Pyramid of Giza, the Taj Mahal and numerous other infrastructure projects that are now considered amongst a wider set of great wonders of the world.

A number of those early ?wonders? have been possible for reasons that mostly no longer apply, including availability of slave labour, surplus of wealth, and the ?absolute rule? of their instigators. Most likely there were also major cost over-runs, and as the Titanic and the Concorde remind us, there have also been some great failures. However the cost over-runs tend to be forgotten for those projects that have become monumental landmarks, greatly enriching the world culturally, socially and (for the modern beneficiaries of cultural tourism) economically.

Whilst imagination, creativity, altruism, longer-term forward thinking and other singularly ?suspect? measures by today?s cost-benefit philosophy can no longer be expected to justify massive infrastructural investment, these motivating factors have featured prominently, together with sound engineering design, in some of the early great wonders of the world.  However challenging it might be for some economists, history now suggests a much broader mix of considerations to support cost-benefit judgements for such socially important infrastructure as national broadband networks. Good broadband infrastructure is needed to allow ?a thousand flowers to bloom? in the form of new broadband applications. The recent history of smart phones and other mobile devices clearly shows that applications don?t always need to be planned in advance, but can be allowed and encouraged to rapidly evolve so as to better serve evolving user needs.

Papers in this Issue

Reflecting on Australia?s ten-year rollout of the estimated A$35.9 billion NBN investment in high speed broadband, the following eight papers, taken as a group, look initially at some important international policy initiatives to accelerate the rollout of broadband infrastructure, and then focus on existing and likely new applications that help justify such long-term investment.

Worldwide exploitation of broadband depends not only on cost effectiveness but also on basic affordability. Paul Budde describes how the UN Broadband Commission for Digital Development is working towards providing affordable broadband in developing countries, and indicates the progress already made and the resulting potential economic benefits. Most strikingly, this UN Broadband Commission is leading a trans-sectoral project aimed at the worldwide eradication of malaria. It will use digital technology such as smartphones to enable cohesive, trans-sector communications. Its work illustrates the power of broadband in sectors such as healthcare, education and e-commerce. It is not widely known that Australia was instrumental in the original establishment of this Commission.

The politics of speed

Stuart Corner?s paper ?The Politics of Speed? offers a comparison of several leading governments? approaches to FTTX networks to explore which countries are favouring FTTH over FTTN, or vice versa (or simply relying on growth in mobile broadband access) ? and why. Amongst a group of countries with which Australian commentators often like to compare our national NBN Policy, the UK, USA and Sweden are included. Australia and China?s policies of top-down government investment are contrasted with the minimalist EU and US government broadband investment policies; and Spain is included as an example of the very few countries committed so far to a Universal Broadband Service.  (For a policy comparison with South Korea, readers are referred to the paper ?Wireless broadband network policy in Korea? by Kur and Kim published in the February 2012 issue of TJA.)

As recently as late 2008 a key policy plank of the newly elected New Zealand National Government was a $1.5 billion fund for the rollout of Ultra-Fast Broadband (UFB) to accelerate deployment of Fibre-To-The-Premises (FTTP) to reach 75% of the population by 2019. In ?Ultra-Fast Broadband in New Zealand - Early Adoption Experience?, Rohan MacMahon and Murray Milner outline the Government's productivity and service delivery improvement objectives with access for priority users in business, schools and health sectors. The paper illustrates several innovative applications and reports on roll-out progress, in the process commenting on the current challenges.

In her paper ?Converging on an NBN Future: Content, Connectivity, and Control ? A Symposium Overview?, Catherine Middleton helpfully shares with readers the views of thirteen prominent speakers from industry, government and academia, and input from an engaged audience, at a symposium hosted on 12 October 2012 by the University of Canberra?s Faculty of Arts and Design. Part of the symposium considered how Australia?s National Broadband Network is already supporting innovation in the digital economy today. With participants further recognising the potential for change in the scope and scale of the NBN following the next federal election, discussion also focused on the current vision for the NBN as a wholesale-only open-access network, and unpacked this into some interesting alternative possibilities, concluding with a useful summary of recommendations.

With a clear view to its future and much to its visionary credit, Tasmania has long been engaged in exploring the potential of broadband, and was made the first Australian state to benefit from the NBN rollout. The stakeholder objectives not only include the economic future of Australia?s smallest, most isolated state, but also on how to capitalise on the comfortable, healthy and natural lifestyle and the availability of well qualified local people. Why would Tasmanians leave all this to earn a living in the high pressure, high density living of many of the worlds major trading centres if ubiquitous high-speed broadband can make this less necessary? In his paper ?Why I am a Champion for Tasmania's NBN?, Darren Alexander enticingly and passionately addresses this question, in the process providing some useful examples and test-bed experiences.

The critical role of e-skills in raising NBN adoption and Australia?s competitiveness in the Digital Economy

The readiness of small businesses and regional enterprises to compete effectively in the digital economy by taking advantage of NBN broadband is being limited by their ability to acquire specific ICT skill sets.  In this paper, Marcus Bowles describes studies of this problem undertaken in three NBN early release regions of Armidale, Brunswick and Scottsdale.  The studies measure E-readiness to adopt and effectively utilise newly available ICT resources.  It is concluded that while broadband access is advancing, efforts to ensure the necessary ICT skills of the users are seriously lagging and need urgent public attention.

Teleworking modes of employment are rapidly changing the workplace scene around Australia as new ICT resources become available.  However, Rachelle Bosua and her co-authors point out that no studies have so far been undertaken to explore the effectiveness of teleworking in Australia, particularly from the viewpoints of productivity and employee wellbeing.  This paper describes case studies across six government and private enterprise organisations in different Australian regions.  The findings indicate the importance of adopting a new management approach to realize individual and team productivity and cohesion.

In this paper another broadband champion, Jim Barber, Vice-Chancellor of the University of New England, argues that the rollout of the National Broadband Network in Australia will accelerate dramatic changes in the way that educationalists educate, and that access to education is being provided, since the advent of the Internet. Among the most important of these are the move away from bricks-and-mortar campuses towards global learning networks that share expertise and resources, the blurring of the virtual and the material, and the rise of mobile learning (m-learning). When combined with the proliferation of Massive Open Online Courses (MOOCs), m-learning will result in access to education becoming a universal human right.

The important and visionary task of offering high speed broadband quickly and cost-effectively across the diverse geographies and population densities of many different countries is of course extremely challenging, but justified when the social and economic benefits exceed the costs looking to the future. In Australia the Federal Government has reported on average twice monthly over the calendar year 2012 on the launch of significant new NBN initiatives, trials, and associated training.   The rollout will never be fast enough to please many, and probably never inexpensive enough for others. However the early application benefits are starting to show that high speed broadband infrastructure can well be considered as a new, great wonder of the world. 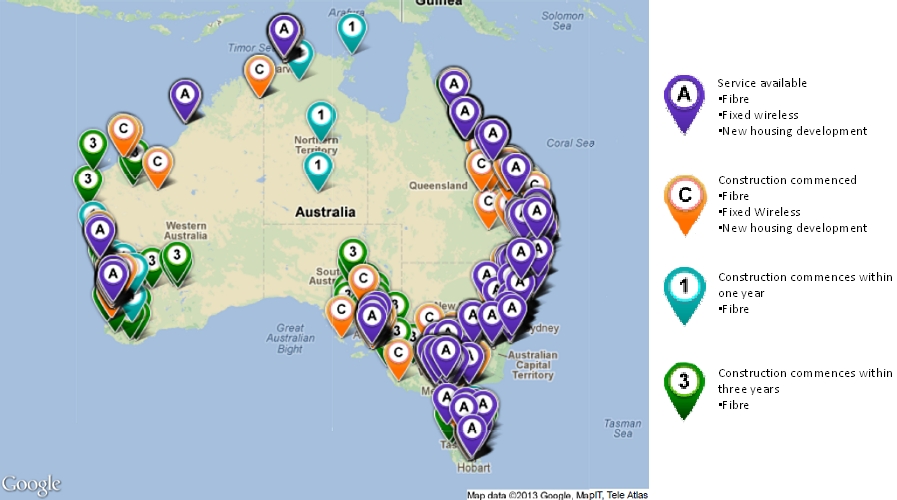 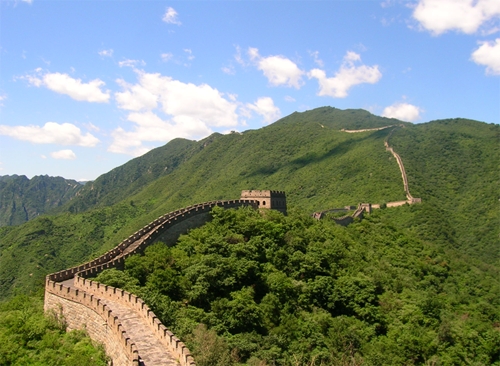