A recent paper (Gul, Sarkar & Gutierrez, 2016) offers recommendations for changes to existing telecommunications legislation and regulations in New Zealand. These recommendations are based on a review of the history of legislation governing the sector and market development since liberalisation in 1989. We have identified key omissions in this review which have prompted us to revisit the analysis and conclusions. We find that the evidence is insufficient to support the paper?s recommendations.

A 2015 illustration of the history of telecommunications sourced from the Ministry of Business, Innovation and Employment and reproduced in the paper (Gul et al, 2016; Figure 1) clearly demonstrates that in the 1990s there was ?some competition, but lengthy litigation on interconnection with Telecom?, and also characterises competition as ?increasing, but still limited? in 2001 (Gul et al,_2016; Figure 1). However, this illustration is not mentioned in the text of the paper, and it provides a stark contrast to the claim of the paper that competition flourished from 1990 (Gul et al, 2016; p185). The illustration also highlights the amendment of the Telecommunications Act in 2006. However, this crucial Amendment Act is not discussed at all in the text of the paper, and it is not listed in the bibliography or the telecommunications legislation in Appendix A.

The paper states that ?competition in the telecom industry really started to flourish? (Gul_ et al_2016; p185) in 1990 with the privatisation of Telecom New Zealand. A long list of legislative orders is provided as evidence of new operators entering the market ?to overcome the monopoly of the Telecom Corporation Ltd? (Gul et al, 2016; p174). The paper then skips past the 1990s, with no commentary or analysis, to the Telecommunications Act 2001 which ?allowed private companies to access the existing telecommunications network to sell their telecommunications services to the public? (Gul et al, 2016; p176). The next identified milestone is the 2006 operational separation of Telecom and local loop unbundling, which the paper asserts was the result of the growth of the telecommunications industry. Without any explanation the paper states (incorrectly) that this involved Telecom committing to provide high speed broadband ?to the whole country by laying an optical fibre infrastructure? (Gul et al, 2016; p176).

In fact, as is made clear in the Cabinet policy minute, the Telecommunications Amendment Act (no. 2) 2006 was formulated in response to public policy concerns about New Zealand?s laggard performance in the OECD broadband rankings and a lack of effective competition in the market (Cabinet Policy Committee, 2006), factors identified in the government?s comprehensive 2005 Stocktake of the telecommunications sector. Following a lengthy investigation (2002-2003) the telecommunications regulator had recommended the introduction of a regulated limited speed bitstream product, but that full local loop unbundling not be introduced. The regulator?s recommendation sought to maintain Telecom?s incentives to invest in next generation infrastructure to support high speed broadband. However by 2005 it became apparent to Government that Telecom?s rate of investment was relatively slow. At the same time competitors struggled to make market inroads in the absence of safeguards for the terms and conditions of supply of wholesale services from the vertically integrated incumbent supplying essentially the same services to its own retail arm (Cabinet Policy Committee, 2006).

The Amendment Act was highly significant in the history of the development of the telecommunications sector in New Zealand as it encompassed key provisions for improving competition, including equivalence of inputs (EoI), non-discrimination and transparency, as well as additional regulated services (unbundled copper local loop and unbundled bitstream access). It was the requirement to implement EoI which led to the functionally separated network arm of Telecom (rebranded Chorus) deploying FTTN (?cabinetisation?) to all cities and towns with over 500 lines ? reaching more than 80% of all New Zealanders ? by the end of 2011.

The final highlighted milestone in the paper is 2010 when ?Ultra Fibre Broadband came into play? and structural separation of Telecom occurred, the purpose of which, according to the paper, was to deal efficiently with growing customer demand (Gul et al, 2016; p176). In fact, had Telecom shareholders failed to agree to structural separation then Chorus would not have participated in the Ultra Fast Broadband (UFB) initiative (Telecom New Zealand, 2011; p36).

The purpose of existing legislation

Prior to the 2001 Act a light-handed regulatory approach had been adopted with reliance only on the non- industry specific competitive safeguards in provisions of the Commerce Act. While market entry did occur in the 1990s, new entrants faced considerable obstacles, including discriminatory pricing and interconnection disputes with Telecom involving litigation spanning several years. A key omission in the paper is the fact that telecommunications had no sector-specific governing legislation until the 2001 Act, to the detriment of competition.

Following the Fletcher Inquiry in 2000, telecommunications-specific regulation was introduced with the passing of the Telecommunications Act 2001. Importantly the Act provided a process for service regulation (including interconnection) with the stated purpose:

Given that the stated purpose of the current Act is the promotion of competition and the long-term benefit of end-users, it is unclear why the paper recommends legislative change to accommodate competition and meeting consumers? expectations.

The New Zealand Government has been engaged in a consultation process since 2015 for the review of the Telecommunications Act 2001. The aim of the review is to determine whether regulatory modifications are necessary following significant technological, market and structural change over the last fifteen years, including convergence, the UFB programme and the structural separation of Telecom in 2011.

Although two of the Government consultation documents are listed in the bibliography, the paper is silent on the implications of the review. This is odd, given that the Government review seeks to ensure that the legislation is fit for purpose to address the challenges alluded to in the paper ? namely, burgeoning demand for high-quality services that will accommodate data-hungry fixed and mobile applications. Furthermore, the consultation papers are very clear that a key Government objective remains the promotion of competition for the long-term benefit of end-users and where there is no effective competition to promote outcomes consistent with competitive market outcomes (MBIE, 2016; p17).

In contrast to the 1990s and early 2000s, the retail market now comprises numerous fixed line Retail Service Providers (RSPs) in addition to Spark and Vodafone, such as Vocus (which includes the CallPlus brand), 2degrees, Trustpower and Compass. The paper lists only three fixed line retailers (Spark, Vodafone and CallPlus) (Gul et al, 2016; p178) and claims that ?the Telecom Infrastructure (including optical fibre) is maintained by Chorus, NZ?s largest telecommunications network operator together with Crown Fibre Holdings? (Gul et al, 2016; p178). While it is true that Chorus owns and maintains the copper access infrastructure, it has an Ultra Fast Broadband (UFB) contract with Crown Fibre Holdings to deploy fibre in 24 of the 33 UFB candidate areas in New Zealand (Crown Fibre Holdings, 2011; p3). Crown Fibre Holdings has only a managerial role in respect to the Government?s UFB investment, and fibre is being deployed and maintained in the remaining candidate areas by three Local Fibre Companies (LFCs), encompassing Whangarei (served by Northpower), Waikato (Ultrafast Fibre) and Christchurch (Enable Services). In the LFC areas Chorus competes in the provision of broadband infrastructure with high speed offerings (ADSL2 and VDSL) over its legacy copper network.

There are a number of approaches to assessing the market?s response to key legislative and regulatory milestones. An important source of data for such an analysis is the Commerce Commission?s annual telecommunications monitoring reports. However, the paper relies mainly on a secondary source which provides little insight on the trends and characteristics of the New Zealand telecommunications sector. For example, rather than declining as is claimed by the paper (Gul et al, 2016; p178), fixed lines have been virtually flat over the past ten years, as is shown in Figure 1 (Commerce Commission, 2017; p4). While the paper shows that there are a number of players in the New Zealand market (Gul et al, 2016; pp178-180) and presents evidence of strong growth in fibre uptake (Gul et al, 2016; Figure 7) as well as data usage (Gul et al, 2016; pp182-184), such information does not demonstrate the existence of any problems, such as lack of competition, that may be due to constraints in the existing legislation or regulation. 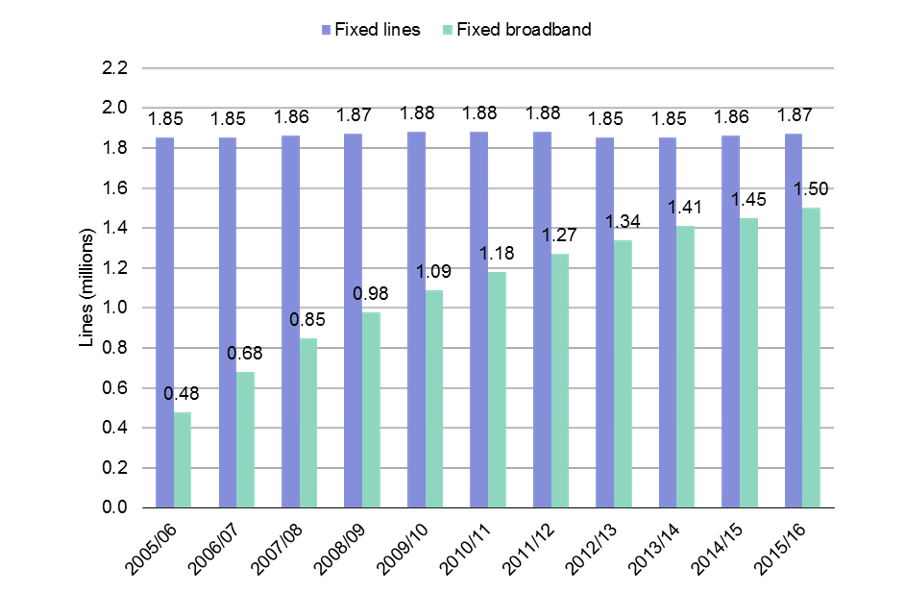 Any thorough investigation of the history of legislation governing the telecommunications sector in New Zealand would reveal a plethora of legislative and regulatory measures that have already been undertaken to strengthen market competition for the long-term benefit of end-users. Although the paper concludes that ?to address the challenges of the existing telecommunications industry some changes in the existing legislation are essential? (Gul, Sarkar & Gutierrez, 2016; p188) there is insufficient evidence to demonstrate that the current regime fails to meet market expectations, nor is there an explanation for an apparent perception of a lack of competition which contradicts the paper?s market characterisation of flourishing competition since 1990. In the absence of such evidence there is nothing to substantiate the claim that the paper?s recommendations ?would help telecommunications legislation regime will be strengthened [sic] and would be able to address the challenging needs of the telecom industry in NZ? (Gul et al, 2016; p188). In fact, maintaining the longstanding objective of promoting competition for the long-term benefit of end-users in the face of rapid technological and market change remains a Government priority, as demonstrated by consultation papers in the recent review of the Telecommunications Act.